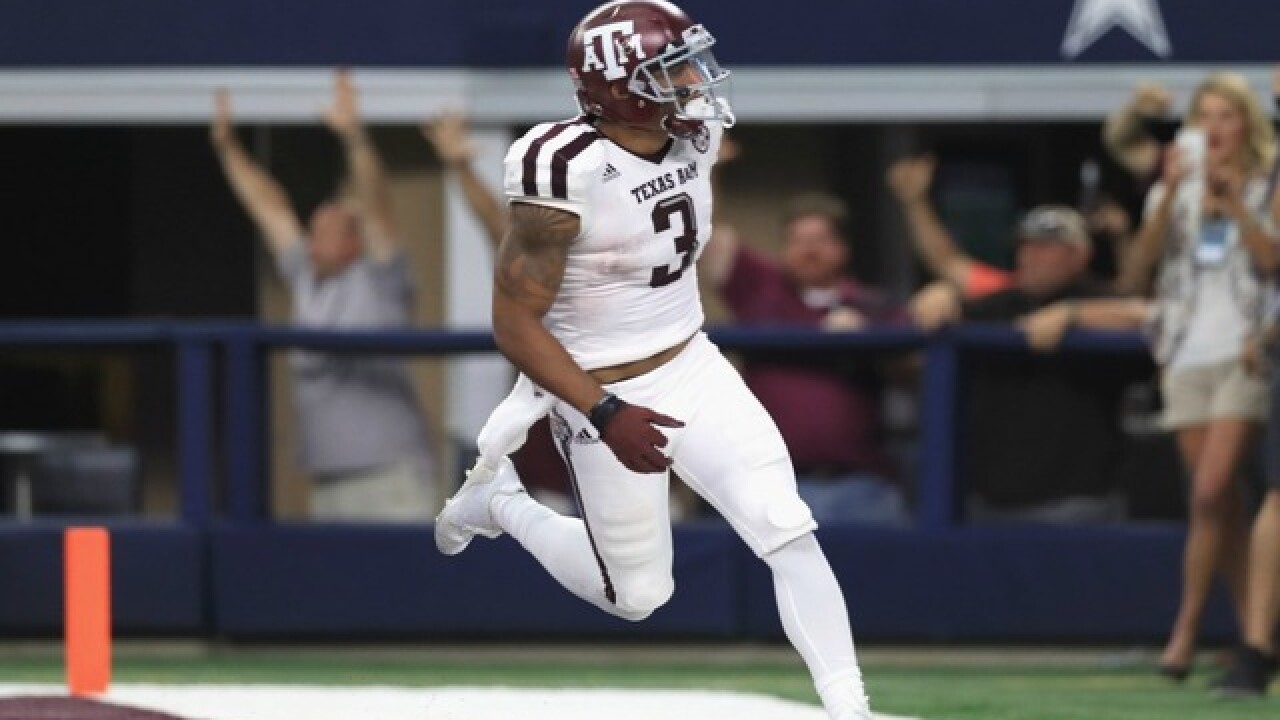 Copyright 2018 Scripps Media, Inc. All rights reserved. This material may not be published, broadcast, rewritten, or redistributed.
Ronald Martinez
<p>Christian Kirk #3 of the Texas A&M Aggies celebrates a 100 yard kickoff return for a touchdown in the fourth quarter against the Arkansas Razorbacks at AT&T Stadium on September 23, 2017 in Arlington, Texas. (Getty Images)</p>

The Arizona Cardinals got new quarterback Josh Rosen some help by bringing a Valley native home on Friday.

The Cardinals selected Texas A&M wide receiver and Scottsdale native Christian Kirk in the second round of the NFL Draft (the 47th overall pick) on Friday night. Kirk was the Gatorade Player of the Year in Arizona as a senior at Scottsdale Saguaro High School in 2014 and was named an All-American by Under Armour, MaxPreps and PrepStar.

A five-star recruit, Kirk chose to play for then-Texas A&M coach and current Arizona Wildcats coach Kevin Sumlin ahead of offers from Arizona State, Arizona, Alabama and over two dozen other schools. He caught 234 passes for 2,856 yards and 26 touchdowns in three seasons with the Aggies.

In an interview with NFL Network last month, Kirk said it would be "surreal" to play in the NFL for his hometown team. "I love the state of Arizona. Born and raised valley kid ... Definitely really liked their staff and what they have going on there. It would definitely be surreal if I could go and play there," he said.

After he was drafted by the Cardinals on Friday, Kirk said "it feels like the stars aligned and it was just meant for me to be here.”

WR Christian Kirk of Texas A&M was just selected by the Cardinals in the 2nd round (47th overall).

Kirk was the Cardinals High School Player of the Week in 2014 (Wk 1) while playing at Saguaro HS. pic.twitter.com/620DSl9jtZ

Kirk is a well-built, mentally tough slot target whose game is built around pace more than explosiveness. His lack of speed and length make him less likely to impact games down the field, but his footwork, route tempo and hands should give him an opportunity to find catches underneath. Kirk's ability to help in the return game is a plus, but the difference between average and good as a receiver could depend on finding the right fit.

After he went unselected in the first round of the draft Thursday, Kirk had a message for all those teams who passed on him.

A lot of names taken tonight. You all are going to feel me, trust me.