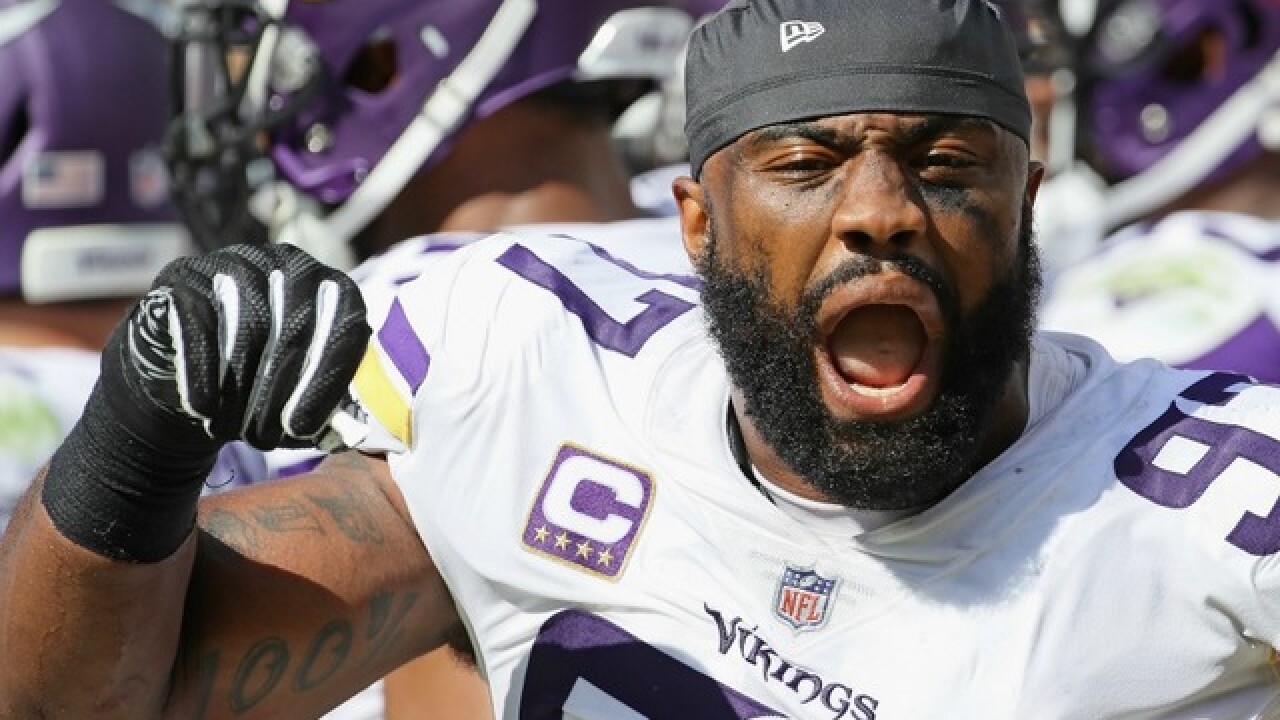 Copyright 2018 Scripps Media, Inc. All rights reserved. This material may not be published, broadcast, rewritten, or redistributed.
Jonathan Daniel
<p>Everson Griffen #97 of the Minnesota Vikings fires up his teammates on the sidelines during a game against the Green Bay Packers at Lambeau Field on September 16, 2018 in Green Bay, Wisconsin. The Vikings and the Packers tied 29-29 after overtime. (Getty Images)</p>

Avondale native and Agua Fria High School alum Everson Griffen has been sidelined indefinitely by the Minnesota Vikings following an undisclosed situation that has caused concern within the organization about his well-being.

The 30-year-old Griffen was ruled out on the pregame injury report against Buffalo on Sunday because of knee trouble. When asked afterward why Griffen wasn't on the sideline, coach Mike Zimmer said the ninth-year player and three-time Pro Bowl pick was dealing with a "personal matter."

KSTP-TV reported on Monday night, citing unnamed sources, that Griffen was involved in a disturbance at a downtown Minneapolis hotel on Saturday afternoon. He was not arrested.

KSTP learned via police reports that a person at Hotel Ivy in Minneapolis had threatened to shoot someone and threatened to assault staff members. The person's name was redacted from the report, but a source told KSTP that Griffen was the person named by police. At one point during the incident, Griffen was reportedly laying on the floor of the hotel lobby.

General manager Rick Spielman said the Vikings are "certainly concerned" by the incident and currently focused on Griffen's well-being.

Griffen has played for the Vikings since he was selected in the fourth round of the 2010 NFL Draft. He is a three-time Pro Bowl selection.

Griffen was a USA Today High School All-American in 2006 and went on to play college football at USC. He was also a star basketball and track-and-field athlete at Agua Fria High School.