UPSET! 3 big takeaways from the Sun Devils' win over No. 5 Washington 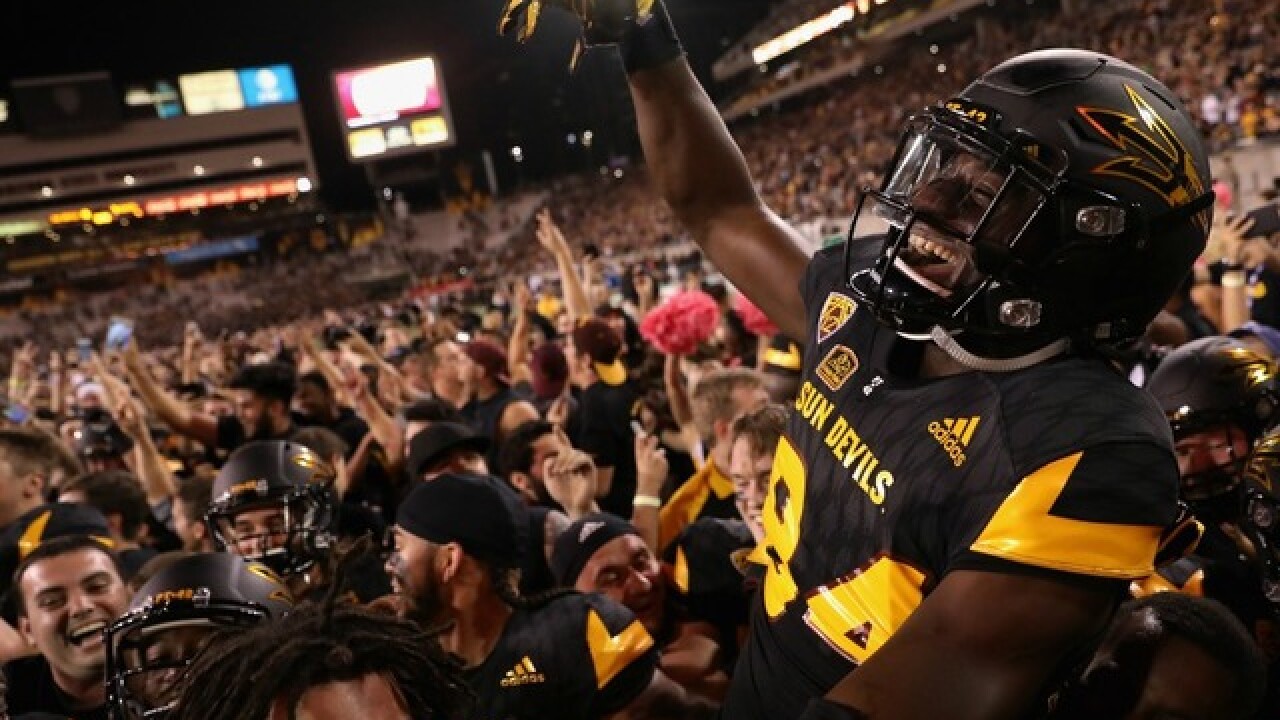 Copyright 2017 Scripps Media, Inc. All rights reserved. This material may not be published, broadcast, rewritten, or redistributed.
Christian Petersen
<p>Wide receiver Frank Darby #84 of the Arizona State Sun Devils celebrates with teammates on the field after defeating the Washington Huskies in the college football game at Sun Devil Stadium on October 14, 2017 in Tempe, Arizona. The Sun Devils defeated the Huskies 13-7. (Getty Images)</p>

The Arizona State Sun Devils came into Saturday night's matchup against the No. 5 Washington Huskies with a 2-3 record and a ton of skepticism about the future of the program.

They left Sun Devil Stadium with their first win over a top-five team in 21 years.

ASU defeated the previously undefeated Huskies 13-7 in front of a raucous crowd in Tempe on Saturday night, moving them to 3-3 on the season and 2-1 in the Pac-12. Here's how they did it.

1. Gutsy call on fourth down

Washington scored a touchdown with six minutes to play to cut ASU's lead to just six points. It looked like the Huskies would get the ball back and a chance to win with two minutes left -- but coach Todd Graham had other ideas.

Facing a fourth-and-3 from the Washington 37-yard line, Graham elected to go for it rather than punt. The move paid off, even though it didn't quite go the way the Devils drew it up, as quarterback Manny Wilkins' 30-yard completion to tight end Ceejhay French-Love sealed the win.

The play that sealed @FootballASU's first win over a top-5 team in 21 years. pic.twitter.com/Bv0txmF3bV

2. Defense does it all

Arizona State's defense had been toward the bottom of the Pac-12 in most statistical categories coming into Saturday's game. That makes what the Sun Devils did against Washington, who came in averaging 43 points and 432 yards per game, that much more remarkable.

The Devils limited Washington to just 230 total yards for the game. They held Huskies junior quarterback Jake Browning to 139 yards on 17 of 30 passing and sacked him five times. It was arguably the most impressive defensive performance in the Pac-12, and one of the best in all of college football, so far this season.

His team's record might not reflect it, but Manny Wilkins has had an outstanding second season as ASU's starting quarterback. His numbers didn't look especially impressive Saturday, but against Washington's dynamic defense, they were stellar.

For the game, Wilkins completed 29 of 41 passes for 245 yards and, most importantly, no turnovers. He also made yet another patented Manny leap on third down to set up the game-winning pass on fourth down.