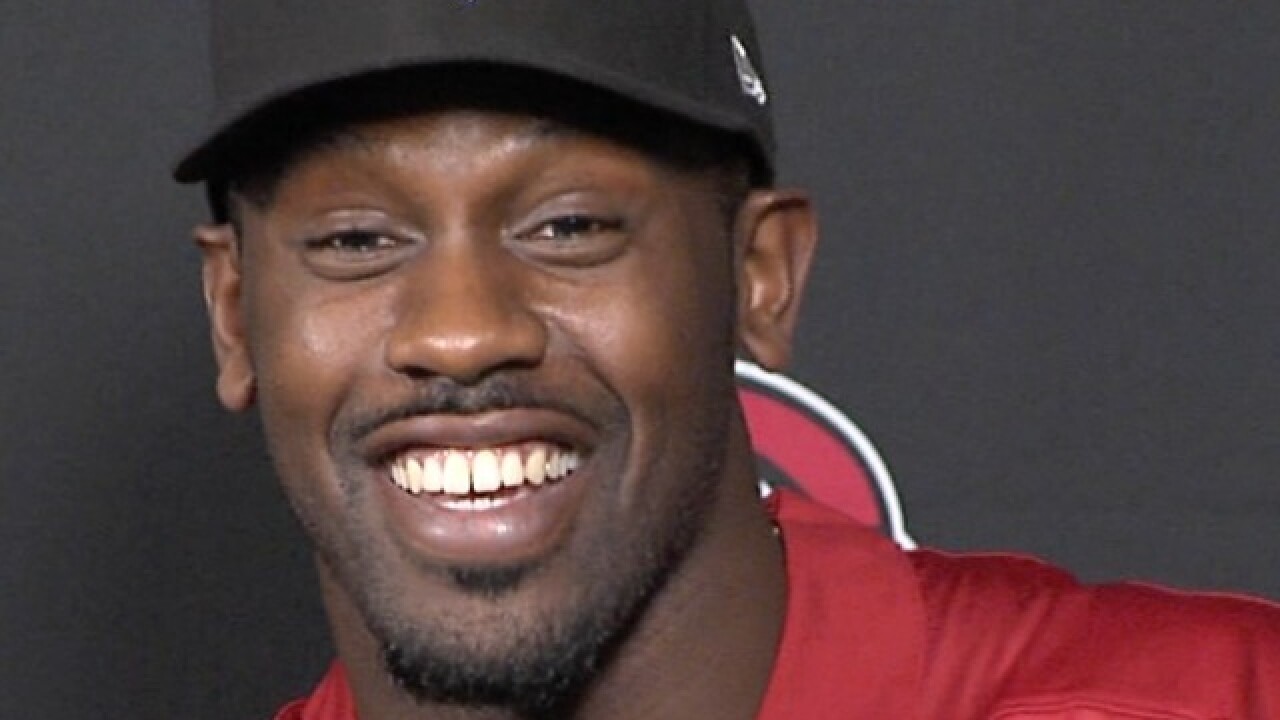 Chandler Jones had an All-Pro season as an outside linebacker in 2017, leading the NFL in sacks with an Arizona Cardinals franchise-record 17.

Now he’s a defensive end, a position that could mean even more trouble for opposing quarterbacks. His only duties: set the edge to stop the run or get to the quarterback, something Jones does with a vengeance.

There’s a viral video of Jones wreaking severe damage on a blocking sled earlier in camp.

“Just too powerful” he explained.

“The guy has great length, good speed off the ball,” Cardinals coach Steve Wilks said. “He has that sliver technique to be able to get around the edge of the tackles, and he’s physical. He can turn that speed into power and create some momentum getting back to the quarterback. He has it all, and hopefully we can continue to build on what he had last year.”

Jones came to the Cardinals from New England in March of 2016 in a trade that sent a second-round draft pick and guard Jonathan Cooper to the Patriots. Because the Cardinals played a 3-4 defense under coach Bruce Arians, Jones had to learn to drop back in pass coverage as well as rush the passer and try to stop the run.

He handled the transition well.

Jones had 11 sacks and four forced fumbles in 2016 and, in March of last year, signed a five-year, $82.5 million contract that offseason, with $53 million guaranteed.

In the 2017 season, Jones lived up to those big numbers. Not only did he lead the league in sacks but also in tackles for loss with 28, well ahead of the second-best performance, 21 by Houston’s Jadeveon Clowney.

“I feel like if you want to be labeled an elite defensive end, you can’t be just a pass rusher,” Jones said. “You have to be good on all cylinders and definitely setting the edge and defeating the run is one of them. That’s one thing I tried to take pride in last season and hopefully I can carry that forward to this season.”

His goal, he said, is to do “better than I did last year.”

“There’s never a perfect season,” Jones said. “I can sit here and tell you a handful of plays that I left out there last season and hopefully I can capitalize this year.”

With Arians’ retirement and the arrival of Wilks, Jones is moving back to the 4-3 defense that he played with the Patriots. It means going back to a three-point stance instead of standing up as an outside linebacker.

“It’s not that hard,” he said. “You just have different terminology. You attack offenses different, but it’s not that big of a difference honestly.”

“He hasn’t had a problem with that at all,” he said. “You go look back at some of the things he’s done in the past. He’s put his hand on the ground before.”

“I feel like guys are flying around a lot more,” he said. “There’s less thinking. There’s one-gap assignments and everyone is flying to the ball.”

Jones will get some edge-rushing help from the return of Markus Golden, who had a team-high 12 1/2 sacks in 2016 but played in just four games a year ago before a season-ending knee injury. Golden is on the physically unable to perform list but could be back before the season begins.

“Markus is a vocal leader,” Jones said. “He’s a guy that you can feel his presence out there but not by just his game play. I’m excited to have him back he’s a ‘hoorah’ guy and a hell of a player on top of that.”

Meanwhile, Jones and left tackle D.J. Humphries have had some spirited battles already in training camp as Wilks encouraged physical play. Humphries is lucky to have the practice, Jones said.

“I told D.J. yesterday, ‘You know what? You’ll never go against someone in a game that’s like me’ and I say that proudly because there’s not a lot of guys that do the moves that I do. I told D.J., ‘If you can stop me on a consistent basis, you’ll be fine.’”