Territorial Cup: The 5 most controversial moments between the ASU Sun Devils and Arizona Wildcats 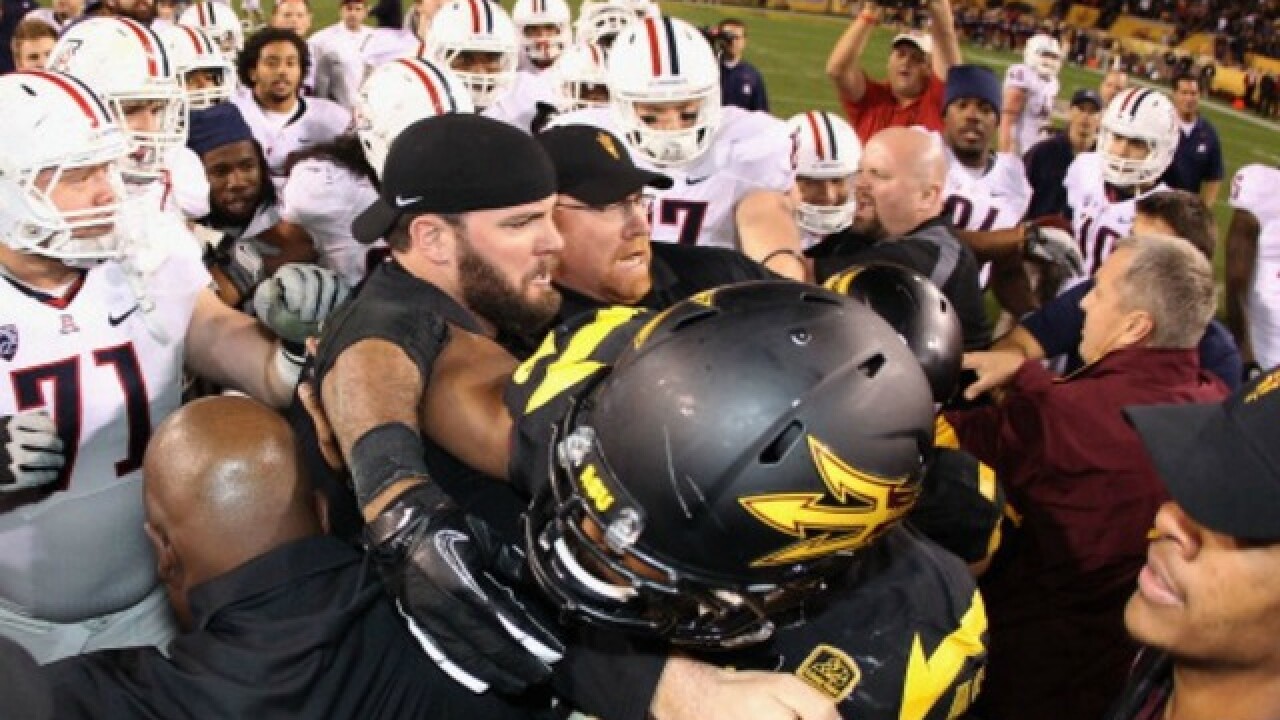 <p><span style="color: rgb(26, 26, 26); font-family: "Helvetica Neue", Helvetica, Arial, sans-serif;">Linebacker Kipeli Koniseti #46 of the Arizona State Sun Devils is held back by security as a fight breaks out at mid field against the Arizona Wildcats following the college football game at Sun Devil Stadium on November 19, 2011 in Tempe, Arizona. The Wildcats defeated the Sun Devils 31-27. (Getty Images)</span></p>

On Saturday, the Arizona Wildcats and Arizona State Sun Devils will meet on the football field for the 92nd time.

While the Duel in the Desert isn't well-known across the country, Sun Devil and Wildcat fans know just how nasty and emotional this rivalry can be.

But what are the reasons behind the passion that surrounds this rivalry? Here's a look at the five most controversial moments that have made the annual Territorial Cup contest what it is today.

Rather than coming to the field in their dark uniforms, which is traditional for the home team to do, the Wildcats dressed in their all-white uniforms for the ‘82 game against the Sun Devils.

Arizona Daily Star columnist Greg Hansen said then-UA head Coach Larry Smith wanted the Wildcats to wear their white unis since they had beaten several top-tier teams earlier in the season in those colors. But UA All-American linebacker LaMonte Hunley, who played in the ‘82 game, said the Devils actually brought the wrong uniforms – their home jerseys – down to Tucson, forcing the Wildcats to switch to their white jerseys before the game.

Whether it was an act of sportsmanship by one school or the other, UA proceeded to defeat ASU 28-18 that night, preventing the Sun Devils from reaching what would have been their first-ever Rose Bowl.

In the game's final seconds, UA running back Clarence Farmer celebrated the Wildcats' 34-21 victory in Tempe by leading his teammates onto the middle of the field and dancing on the likeness of Sparky, ASU's long-time mascot.

The incident led to punches being thrown in an altercation that lasted several minutes and canceled what was to be the first-ever on-field presentation of the Territorial Cup.

The champion of the WAC (the conference to which both ASU and UA belonged in 1968) was yet to be determined, but Wildcat Coach Darrell Mudra wanted his team to be treated like a champion even before the 1968 Duel in the Desert.

The Sun Bowl was set to extend an invitation to the WAC champions that year, but before UA's game vs. the Sun Devils, Mudra went to the Sun Bowl committee members and gave them an ultimatum: Invite the Cats to the bowl before they played ASU, or they wouldn't go at all – even though ASU still had a chance to surpass UA for the conference lead.

The committee caved, and the furious Sun Devils took out their frustrations on the Wildcats a few days later, blowing out Arizona 30-7 in Tucson.

With a commanding five-touchdown lead over the Wildcats in the fourth quarter in Tucson, ASU quarterback Jake Plummer threw a pass that was intercepted in the end zone by UA's Mikal Smith and returned for a touchdown. During the return, ASU offensive lineman Glen Gable needlessly clipped Wildcat linebacker Daniel Greer from behind, causing severe damage to Greer's knee.

The incident led to a sideline-clearing brawl that required the police to intervene and Gable's family to be escorted from Arizona Stadium. After the incident, UA Coach Dick Tomey and ASU Coach Bruce Snyder took to the airwaves to plead for a more civil tone in the rivalry going forward.

The most controversial moment in UA-ASU football history didn't happen during a game – though it did occur on the field.

Proposition 200, a 1958 Arizona referendum with widespread support in the Phoenix area, would officially change the name of then-Arizona State College to Arizona State University. But many in Tucson wanted UA to remain the state's only university.

Weeks before Election Day, several Wildcat students or alumni (who were never apprehended) broke into the brand-new Sun Devil Stadium and burned "No 200" in the middle of the field, just days before the first-ever football game was to be played there.

Despite the vandalism, Prop 200 passed by a 2-to-1 margin, and in Frank Kush's first year as ASU head coach, the Devils toppled the Cats 47-0 in Tucson. But "No 200" was forever burned into ASU-UA history, and it made the rivalry more personal than ever.

Shane Dale is the author of Territorial: The History of the Duel in the Desert