Report: Cardinals 'heartbroken' they didn't get Josh Allen instead of Josh Rosen

By most accounts, the Arizona Cardinals (and their fans) were ecstatic with the selection of UCLA quarterback Josh Rosen with the 10th overall pick in last week's NFL Draft.

But did the Cardinals originally have their eyes on another QB who happens to share Rosen's first name?

Chris Simms, a former NFL quarterback and co-host of the Simms & Lefkoe podcast on Bleacher Report, reported Tuesday that the Cardinals were "heartbroken" they didn't land Wyoming QB Josh Allen -- and in fact, the Cardinals and Denver Broncos were prepared to make a trade that would allow that to happen.

But the selection made by the Cleveland Browns with the No. 4 overall pick -- one spot ahead of the Broncos at No. 5 -- threw a wrench into those plans.

The Cardinals barely missed their favorite QB in the #NFLDraft (via @SimmsandLefkoe) pic.twitter.com/bbIadNy1Ls

"Everything I know is that the No. 5 pick with the Broncos, the trade was in place, and it was with Arizona. And then (defensive end Bradley) Chubb was on the board," Simms said. "The Arizona Cardinals were heartbroken they did not get Josh Allen."

Simms' assertion matches up with a pair of reports from before the draft. In late March, Fox Sports' Joel Klatt reported the Cardinals "absolutely love" Allen. Then, less than a week before the draft, Mike Klis at 9News in Denver reported the Cardinals were one of three teams that had been in touch with the Broncos about making a trade with to Denver in exchange for the No. 5 pick.

But according to Simms: When the Browns passed on Chubb with the No. 4 pick -- electing instead to take cornerback Denzel Ward -- Broncos general manager John Elway decided Chubb was too good to pass up, leaving the Cardinals to find a Plan B.

The Cardinals ultimately traded their 15th overall pick, along with picks in the third and fifth rounds, to the Oakland Raiders in exchange for the 10th overall pick, where they selected Rosen.

"The Browns screwed the Cardinals," Adam Lefkoe, Chris Simms' cohost, said. "By the Browns passing on Bradley Chubb, Elway went, I was going to trade, but this was one of the few guys I didn't think would be here."

What Simms and Lefkoe don't mention is the Cardinals theoretically could have made a trade with a team drafting behind the Broncos -- namely, the Indianapolis Colts at No. 6 or the Tampa Bay Buccaneers at No. 7 -- in order to land Allen. Instead, the Buccaneers agreed to a trade with the Buffalo Bills, who moved up from the No. 12 pick and drafted Allen as their potential QB of the future. Of course, it's possible the Buccaneers weren't willing to trade all the way down to the Cardinals' pick at No. 15.

In any event, Simms' report could provide Rosen -- who said every quarterback taken ahead of him in the draft was a mistake -- with even more motivation as he enters his rookie season in the desert.

And while the Cardinals staff might be heartrbroken about missing out on Allen, their fans don't seem to be at all. 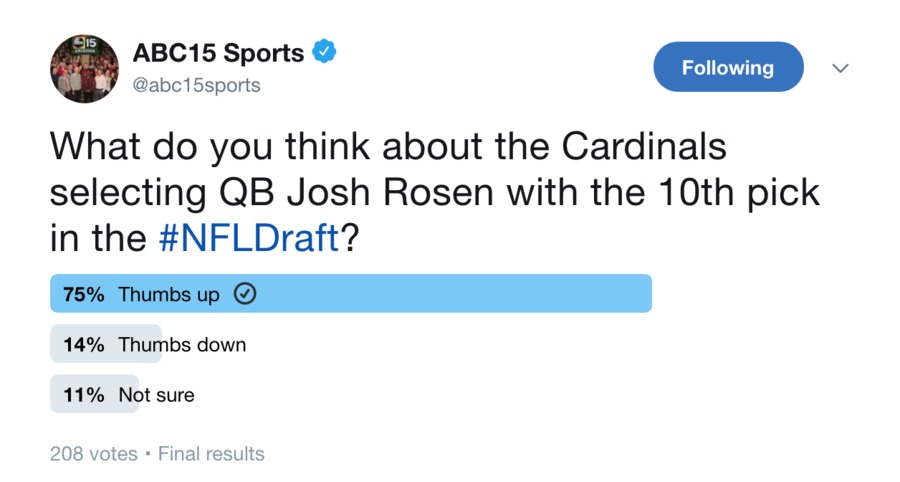