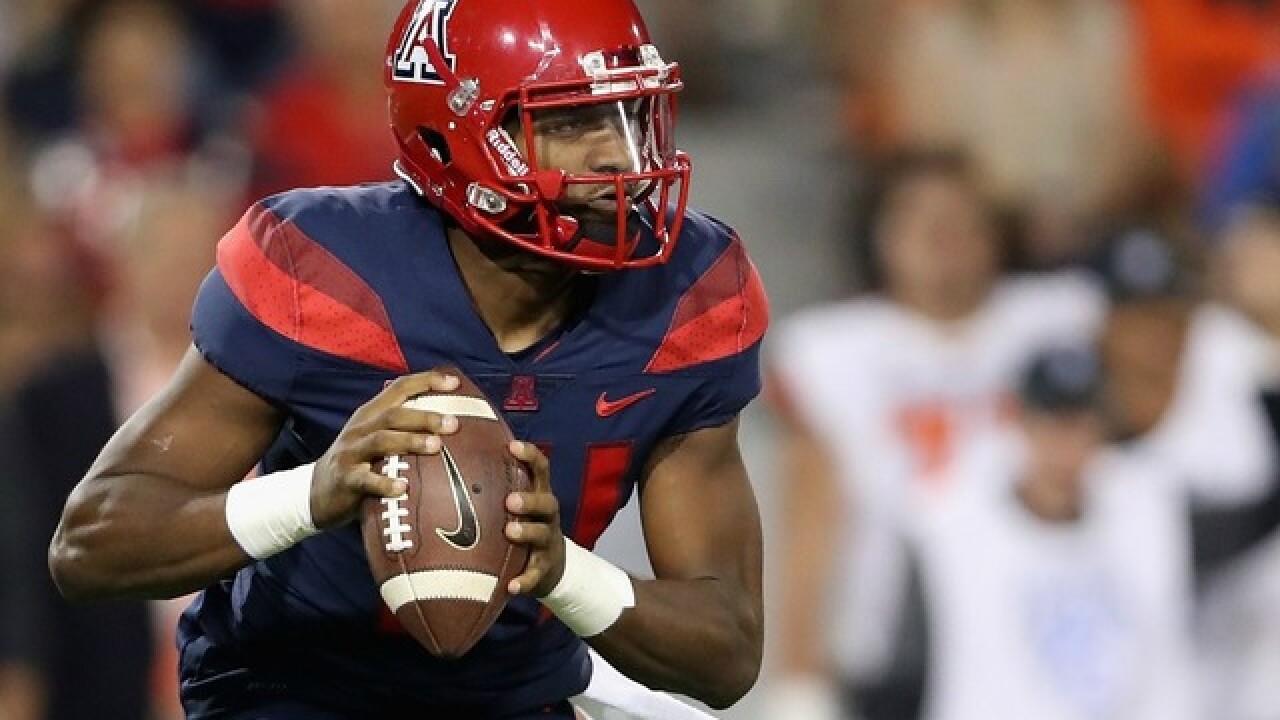 Copyright 2018 Scripps Media, Inc. All rights reserved. This material may not be published, broadcast, rewritten, or redistributed.
Christian Petersen
<p>Quarterback Khalil Tate #14 of the Arizona Wildcats looks to pass during the second half of the college football game against the Oregon State Beavers at Arizona Stadium on November 11, 2017 in Tucson, Arizona. (Getty Images)</p>

The return of elite quarterback Khalil Tate, an improved defense and, of course, the hiring of big-name coach Kevin Sumlin have some Wildcat fans thinking big.

But how far can UA go in 2018? Here are some predictions from a pair of Wildcat alums.

I couldn't be more excited that the 2018 season is beginning for the Wildcats. With a proven new head coach, Kevin Sumlin, and a Heisman Trophy candidate, QB Khalil Tate, plus a schedule that is manageable, a Pac-12 South title for Arizona isn't unreasonable.

The key, though, is starting 3-0 in non-conference, including wins over a hungry BYU team and at Houston and 2019's likely No. 1 overall NFL Draft pick, Ed Oliver. Beat those two teams and Southern Utah plus a virtual conference opening layup at Oregon State -- and might the USC game on Sept. 29 be the biggest in recent memory?

October will be crucial with Cal at home being a potential letdown spot after the USC game, followed by a short week trip to Utah and a game in the Rose Bowl against Chip Kelly's UCLA squad. Then, Oregon and its highly touted QB, Justin Herbert, makes a trip to Tucson for Homecoming. A 2-2 month would be a victory in itself. In November, beating Colorado at home and Washington State on the road after a bye week sets up a revenge opportunity in the Territorial Cup game against ASU.

I'll predict that UA edges out USC in the South before getting stomped by Washington in the Pac-12 Championship Game. Tate suffers a midseason injury to slow  the Cats' momentum and his Heisman hopes -- but when he announces a return for his senior year, the football future will remain bright in Tucson.

At this time one year ago, UA football fans were wondering if their team would improve much on a disappointing 3-9 season. Then, Khalil Tate happened, and the Wildcats opened the season with a 7-3 record. The season ended with three straight losses, but the return of Tate, plus the hiring of Kevin Sumlin following the sudden departure of Rich Rodriguez, has made UA a trendy pick to contend for its first Pac-12 South title since 2014.

Tate should flourish in Sumlin's offense. He's a capable runner (a massive understatement) but is also a terrific passer, and Sumlin and new offensive coordinator Noel Mazzone will look to emphasize that. Talented sophomore tailback J.J. Taylor will help Arizona maintain a healthy balance on offense, albeit behind a revamped offensive line that will be tested early and often this year.

Health permitting on offense, the difference between a good and a great season for the Wildcats will be determined by the defense. The Wildcats were an extremely young team on that side of the ball last season, and if often showed -- but they do return the Pac-12 Freshman Defensive Player of the Year in linebacker Colin Schooler, and their secondary should be one of the better units in the conference. UA's ability to retain defensive coordinator Marcel Yates should ultimately pay off.

My overall and Pac-12 predictions for UA are identical to Eric's, but I don't think 6-3 will be enough to win the South. I think USC will edge out the Wildcats for that title. Still, most Wildcat fans will be just fine with nine wins and six conference victories -- provided one of those victories comes in the final game of the regular season.