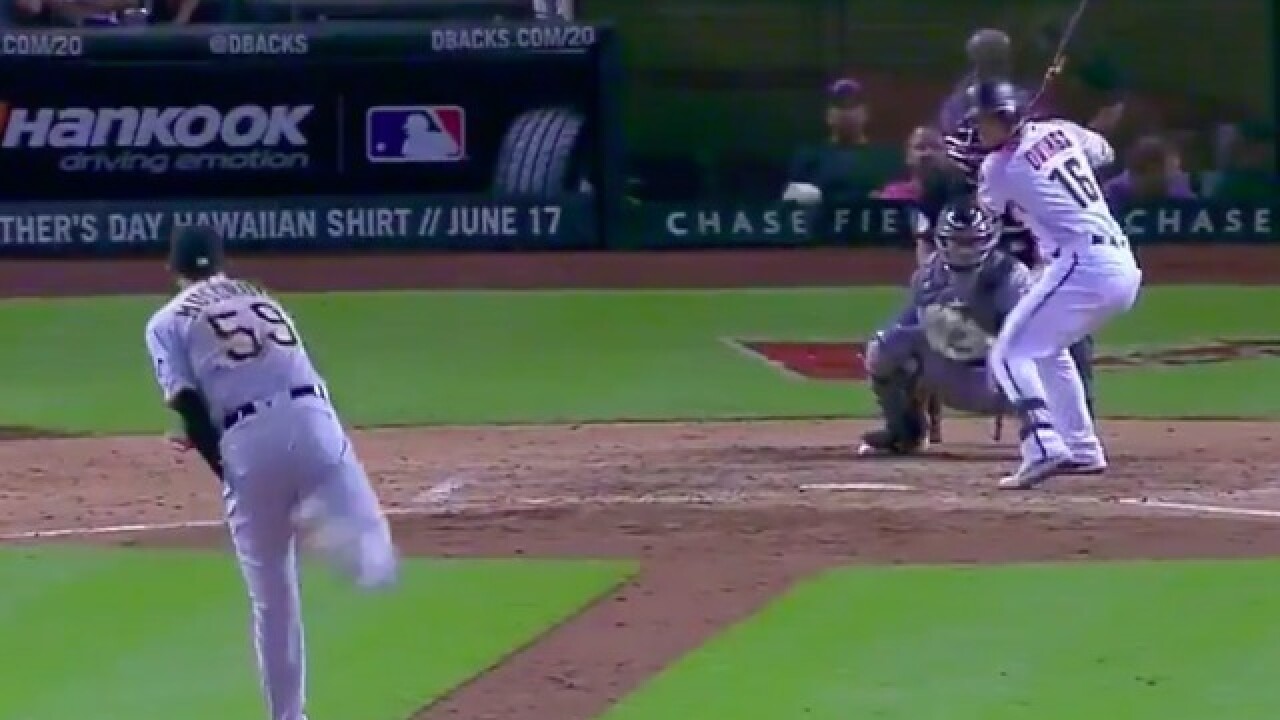 Arizona scored two runs on wild pitches in the eighth inning, Jake Lamb hit a tying three-run homer in the seventh and the Diamondbacks took advantage of a hit by pitch to rally past the Pittsburgh Pirates 9-5 on Monday night.

The Pirates led 5-0 behind Joe Musgrove until the right-hander opened the seventh inning by hitting Chris Owings on the first pitch. Musgrove admitted after the game that he did so as retaliation for Josh Harrison being plunked in the top half of the inning by D-backs pitcher Braden Shipley. Nick Ahmed followed with a run-scoring single, Daniel Descalso had another off Edgar Santana and Lamb tied it at 5-5 on a three-run homer to left.

"If it was retaliation, it certainly cost their pitcher a couple of runs and it might have cost them a win," D-backs manager Torey Lovullo said after the game.

One HBP changed the game. And Brandon Webb would not have handled as Joe Musgrove did. pic.twitter.com/Fh1Dm5ObPE

"If it was retalition it ... might have cost them a win." -- Torey Lovullo on the Owings HBP that altered the game. pic.twitter.com/z3oIj8ERCV

"It is nothing more than protecting your teammates," Musgrove said. "That is baseball and how the game is played. If you are willing to go out and hit somebody you have to be willing to deal with might come with that." https://t.co/IJt1zAfsFi

Ketel Marte singled off Kyle Crick (0-1) to lead off the eighth, moved to second on a walk and raced to third after a pickoff attempt at second base by catcher Elias Diaz. Marte scored when the next pitch by Crick bounded to the backstop. Descalso put Arizona up 8-5 with a two-run triple and scored on Dovydas Neverauskas wild pitch.

Archie Bradley (2-1) worked out of a bases-loaded jam in the seventh inning.

Musgrove was sharp early against the Diamondbacks, working out of jams in the second and sixth inning without allowing a run. His night came unraveled with the plunking of Owings. Musgrove gave up the single to Ahmed was lifted after a throwing error by third baseman David Freese put runners on first and second with no out.

Arizona’s Patrick Corbin was solid his previous outing, holding the San Francisco Giants to a run on four hits in 6 1/3 innings. The left-hander wasn’t as sharp against the Pirates.

He gave up an unearned run in the first inning to the Pirates on first baseman Paul Goldschmidt’s fielding error and four more in the fifth on two-run hits Austin Meadows and Starling Marte had two-run hits.