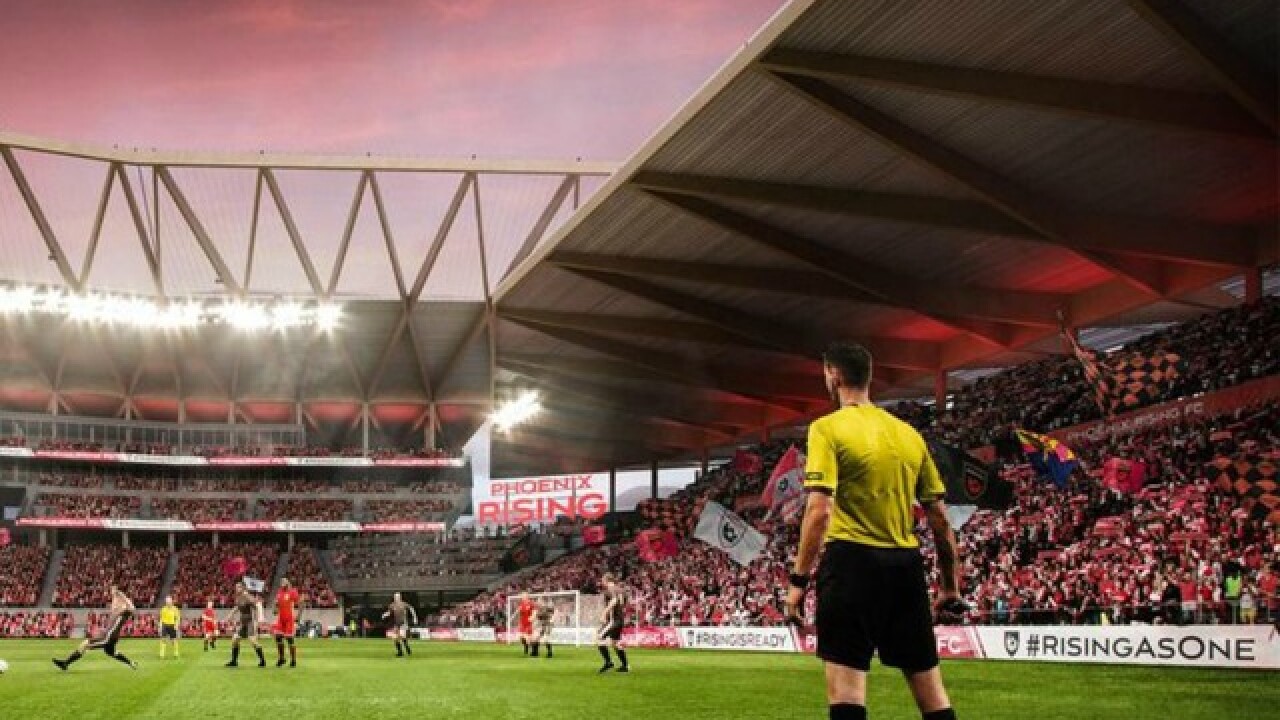 Copyright 2018 Scripps Media, Inc. All rights reserved. This material may not be published, broadcast, rewritten, or redistributed.
<p>(Rendering via Phoenix Rising FC)</p>

Major League Soccer could be whittling down its list of possible cities for its final two MLS expansion teams -- and Phoenix appears to be on the short list of remaining contenders.

On Monday, MLS commissioner Don Garber mentioned three cities in the mix to land the 27th and 28th franchises in the league, per NBC Sports.

“We’ve had some interesting conversations with Phoenix of late. We’re tracking very closely with our friends in San Diego and they have a key vote coming up in the fall. The Sacramento bidders will be here, they’ve come to the last number of big MLS events. They remain encouraged on finalizing their capital structure," Garber said.

Phoenix Rising, which currently fields a team in the United Soccer League, is one of 10 remaining organizations that submitted a bid and is hopeful to land an expansion MLS team. Phoenix Rising owners met with Garber and other MLS officials in New York last week to discuss their proposal.

"I think it was a great opportunity for us to showcase the significant advancements we’ve made as an organization relative to our application," Phoenix Rising general manager Bobby Dulle told ABC15 after the meeting. "We’ve come a long way in regards to our number of corporate partners, the media coverage, the brand exposure, and last but not least, it’s the fans. The fans have come out in droves to support what we’re doing and engaging with us."

In March, Phoenix Rising submitted a proposal for an MLS-sized stadium designed by Populous, which has designed seven existing MLS stadiums. The lead architect of Phoenix Rising's stadium proposal was part of last week's meeting. The site of the proposed stadium is yet to be determined.

Dulle told ABC15 last week that he was not given a timetable as to when MLS would make its final decisions on expansion franchises, and he is unsure where Phoenix Rising's proposal stands compared to others in the mix.

"It’s a daily process to continue to have the fans come out and support us, continue to identify options for locations, continue to modify stadium design," he said. "It’s very fluid, and it’s a process we’re going to learn from MLS so we make sure we put ourselves in a position to have the strongest application out of the other nine cities that are competing right now for one of two spots."