No. 17 Arizona vs. No. 25 ASU: 3 big questions heading into Thursday's showdown in Tempe 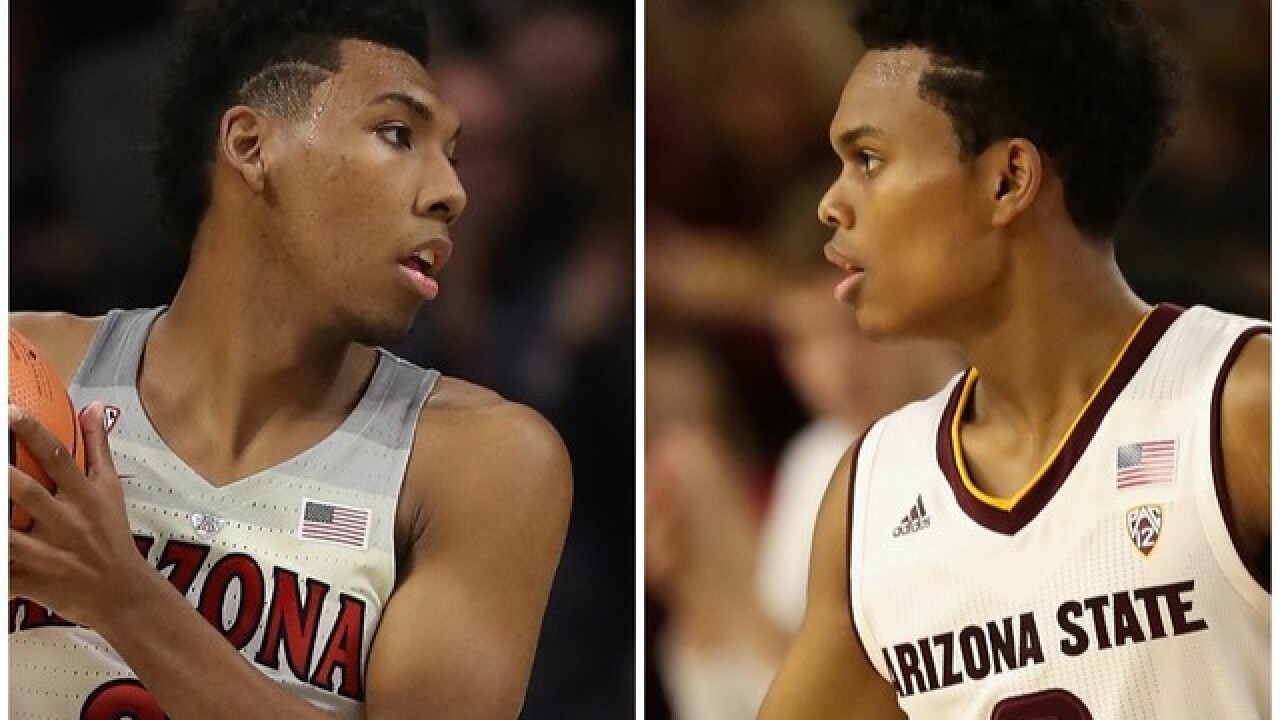 On Dec. 30, the Arizona State Sun Devils were the last remaining undefeated team in college basketball -- but the Arizona Wildcats handed them their first defeat.

Seven weeks later, the Devils will get their chance at payback.

SEE ALSO: Predictions for ASU vs. UA in Tempe

Who will come away with a big conference win Thursday night? Here are three important questions heading into that showdown.

The Sun Devils depend more on the 3-point shot than the Wildcats do, and their senior trio of Tra Holder, Shannon Evans and Kodi Justice has been outstanding from beyond the arc. But UA is the Pac-12's best 3-point-shooting team, connecting on 39.4 percent of its shots from distance this season. (ASU is at 36.9 percent, fifth-best in the conference).

Big men Romello White and De'Quon Lake have been important additions for the Sun Devils, but they'll likely struggle to contain the Wildcats' twin-tower duo of Deandre Ayton and Dusan Ristic on Thursday. That's why it's imperative that the Sun Devils don't allow UA to burn them from deep, as well.

ASU has recently found the ability to win without shooting the ball well from beyond the arc. But Arizona outshot ASU from 3-point range in their first meeting (8 of 20 vs. 8 of 25), and if that happens again Thursday, the Devils could be in trouble.

2. Who will win the free-throw battle?

The Wildcats wouldn't be in first place in the Pac-12 without some outstanding free-throw shooting: They went 34 of 37 and 22 of 23 from the line, respectively, in close wins over Oregon and Colorado last month. But UA has struggled to even get to the line lately, earning just 22 combined free-throw attempts in its last two games.

Meanwhile, ASU has attempted and made more free throws than any other Pac-12 team, and the Devils' 25-of-28 performance from the line was key in their win over UCLA on Saturday. One of Bobby Hurley's mottos is to make more free throws than your opponent attempts, and ASU has routinely done so throughout the season.

The Devils are 74 percent from the line this season, good for fourth in the Pac-12, while UA is second at 76.4 percent. In their Dec. 30 meeting, UA made 20 of 23 free throws, and ASU made 20 of 25. Which team will get to (and shoot better from) the line Thursday -- and will ASU's infamous Curtain of Distraction come into play?

Assuming Ayton and Ristic, along with Pac-12 leading scorer Allonzo Trier, all produce at their usual levels, it will become imperative for ASU to limit UA's (forgive the pun) wildcard, sophomore Rawle Alkins, on Thursday.

The 6-foot-5, 220-pounder from Brooklyn has missed nearly half the season due to an offseason foot injury, and he's been hot and cold since his return. Alkins scored a combined nine points on 4-of-20 shooting in back-to-back losses vs. Washington and UCLA, but he followed that up with a 20-point performance on 7-of-12 shooting in the Wildcats' win over USC on Saturday.

Simply put: As Rawle goes, so go the Wildcats. If Alkins, who is averaging 13.6 points per game this season, scores 15-plus on Thursday, UA should win. If not, the door will be open for the Devils to earn some payback for that Dec. 30 defeat.