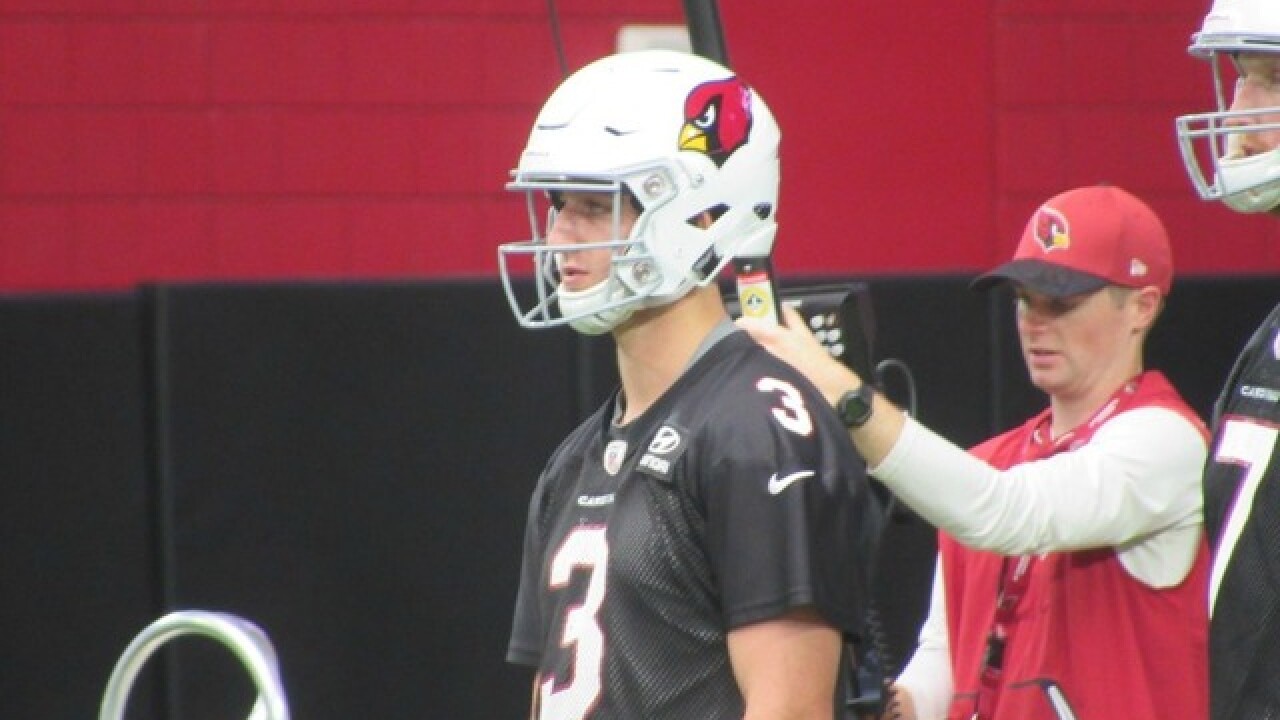 Josh Rosen is a smart young man and in the early stages of Arizona Cardinals training camp he's doing a lot of thinking.

The rookie from UCLA is looking forward to the day where the pro offense he is trying so hard to master is second nature and he can play with pure reaction. Because he's had a few decision-making errors lately, including an ill-advised interception on Saturday.

"Throughout practice you could see again the accuracy," Wilks said. "He threw one ball right down on the seam that was on-point. I showed that in the team meeting. Again, his decision-making sometimes, we've got to make sure we can shore that up."

It's a valid point, Rosen said.

"I absolutely understand what he's saying," Rosen said before Sunday's practice. "I turned the ball over a little bit last practice and at a couple of OTAs. He has a goal and I have a process in which to go about it and my process is I have to own the playbook."

Rosen's confidence and ability have won over Larry Fitzgerald, one of the game's greatest receivers.

"Obviously, watching him through offseason, training camp, practice yesterday, he's got a wealth of talent," 14-year NFL veteran receiver said. "The guy's got just an unbelievable skillset. He can make all the throws. He really picks up on things well, communicates real well with his teammates."

Once he has mastered the plays, he reasons, Rosen will not have to think so much but simply react, and that will lead to the right decisions on the field. All the while not losing his trademark aggressiveness.

"I'm focusing so much on getting lined up and get everyone doing the right thing and trying to give it to the right guy," Rosen said. "When all that stuff is second nature you can focus on other things, but you can never give the ball to the other team. That's the biggest thing that most every coach presses in football is just take care of the ball.

"I'm not going to play overly conservative and not play who I am, but you just have to feel that soft spot. I'm definitely am aggressive and take shots but after to be very aware of situations and not make it too easy for the other team to get the ball, hand them the ball."

The Cardinals got Rosen, the man they consider their future franchise quarterback, by pulling off a trade to draft him 10th overall out of UCLA.

This isn't Rosen's team yet.

Wilks said Saturday that the starter's job is Sam Bradford's to lose. For now, Rosen fights against Mike Glennon for the No. 2 job.

"I think people forget how good he is," Rosen said. "He's just unbelievably quick and decisive with everything he does and the ball doesn't touch the ground. It's his first year in this offense, too, and it seems like it's been his fourth. ... He's unbelievable and I'm going to try and top that. Whether now, later, whenever."

The easygoing Bradford says he is glad to help Rosen all he can.

"He's a good kid," Bradford said. "He's eager to learn, he wants to learn. He wants to be great. I think he's got the right attitude and the right mindset for this position and this league. I'm going to continue to do everything I can to help and make him the player that he's capable of being."And the professionalism required to succeed at this level seems to suit Rosen.

"It's still very teammate oriented, there's a lot of chemistry things that you have to take into account," he said, "but it's like 'Go out on the field and do your job.' You're not worrying about anything else."

Right now, he said, his job is "owning" the playbook and showing he can implement it at a high level in practice and the preseason.

Bradford has a history of injuries. Rosen's big chance could come at any time.