'I had no idea': Valley residents discuss not knowing they were playing basketball with Mike Bibby 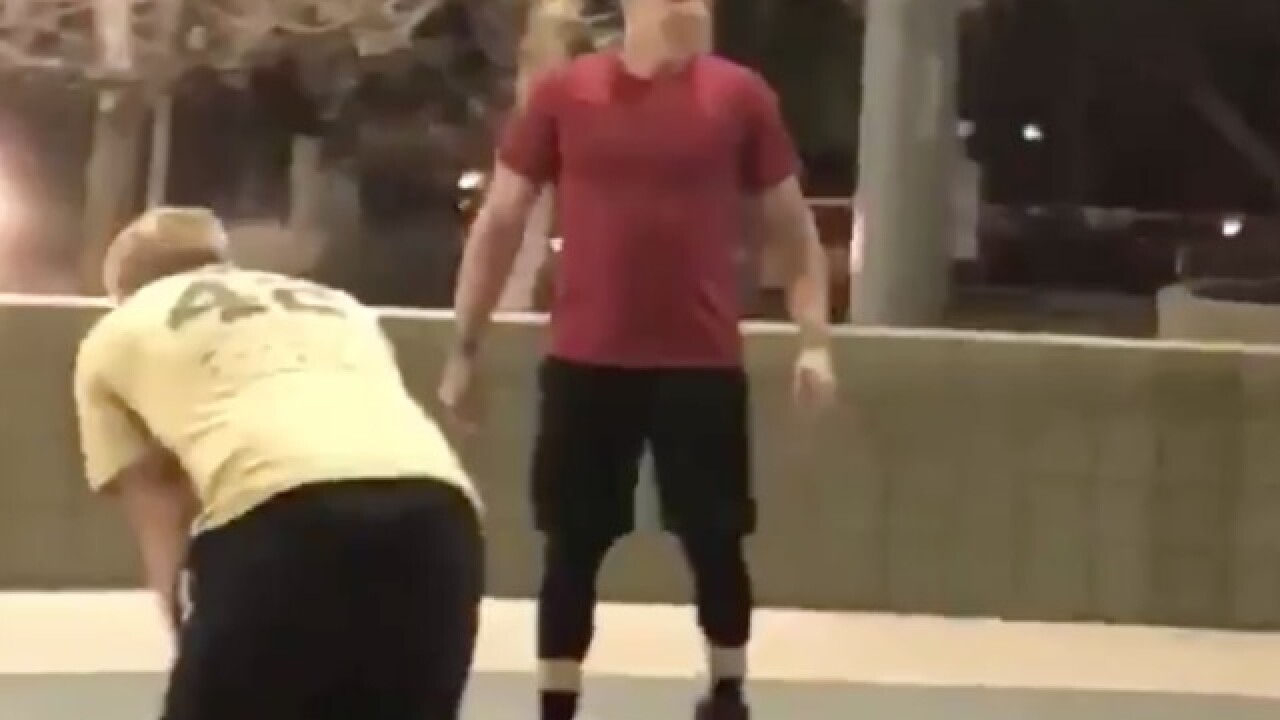 After enduring some teasing through social media -- not to mention from their own pastor -- the two Valley residents who unwittingly played basketball with former UA and NBA star Mike Bibby have told their side of the story.

Bibby, a former standout at Phoenix Shadow Mountain High School who led the Wildcats to a national championship and played 14 seasons in the NBA, talked a couple guys shooting around at a Scottsdale park into a friendly game of 21 on Wednesday night. Bibby's son posted video of the game, noting his father introduced himself to both men as Chris.

The video has since gone viral, as neither man apparently had any idea who they were actually playing.

My dad went to my sisters volleyball practice and played two guys in 21, and told them his name was Chris 😂 pic.twitter.com/JUUE9jGF70

As it turns out, both men had their suspicions that "Chris" might not be who he said he was.

"Right away I thought to myself: This guy looks really familiar. And I just couldn’t put two and two together," said Andrew Zehnder, a 28-year-old IT project manager originally from Nebraska. "Neither of us are from Arizona, so he's not like a quote-unquote local star I grew up idolizing. But I definitely know of him."

Zehnder noticed Bibby, who competed in the BIG3 basketball league last year, is in peak physical condition. "Maybe just the TV makes him look a little skinnier when he’s playing the 7-foot guys," he said.

Zehnder's buddy in the video, 27-year-old Taylor Kotewa, is a freight agency owner who moved to the Valley from Minnesota a year ago. The two men became friends through their young-adult group at Hillsong Phoenix.

Like Zehnder, Kotewa had no clue who he was about to take on.

"He was just super down to Earth. I had no idea," Kotewa said of Bibby. "He didn’t give off that impression that people always know who he is. He was really cool. I thought he was just a regular guy.

"I grew up on a farm. I wasn’t watching NBA basketball every night. I’d heard of Mike Bibby but I didn’t know what he looked like. I had an image in my mind that he was shorter, but I had no idea."

The three men proceeded to play two games of 21, an every-man-for-himself game in which the object is to simply score 21 points before your opponents do.

In their first game, Kotewa actually took an early lead over "Chris" and Zehnder -- and he even decided to throw a little playful trash talk Bibby's way.

"He was kind of cherry-picking under the hoop when Andrew would be out on the point. I said, 'Come on, Chris! Guard the ball, man!' I was just razzing him," he said.

But reality set in for Kotewa and Zehnder when "Chris" began to lock in.

"Once Mike saw a few go through the hoop, it was over because he just couldn’t miss," Zehnder said. "I think that it took him a little bit to get used to it because we were playing with one of those rubber balls from like Target or Walmart. But once he got a little hot from 3, the rest was history.

Eventually, Bibby confessed his pro basketball background to both men. But even at that point, Kotewa didn't quite put everything together.

"I was like, 'Wait, what? I thought you said your name was Chris?' And then he said, 'No, man, I’m just kidding.' I didn't realize this until afterwards, but I thought he was kidding about his name not being Chris. I was just so confused."

The three men played a second game of 21, which a red-hot Bibby won easily, before Bibby and his family headed home.

"He said, 'Thanks for letting me play,' and then headed out," Zehnder said. "But yeah, (he was) a really nice guy. We had a couple convos about that he's from the area and grew up here and stuff like that."

Later that night, Bibby's son posted the video of "Chris" beating both Zehnder and Kotewa. They first heard about the video via a text from their Hillsong pastor.

"He saw us and he screenshotted it, and said, 'Is this you guys?' with the crying face emojis," Kotewa said. "That’s when we knew that it was actually him for sure."

In the hours that followed, NBA.com, SB Nation and other national media outlets wrote stories about the video, which has been retweeted nearly 2,000 times since Wednesday night.

Both men have received their share of teasing about the incident, and many on social media have questioned how neither man managed to recognize Bibby right away.

"Now that I look back, I probably should've known," Zehnder said. "(There's been) a lot of teasing, but some people understand that, even if I did know, I wouldn't just ask him if he's Mike Bibby, because he said his name was Chris. But a lot of good's come out of it."

If nothing else, both men have earned a story they can share with friends and family for the rest of their lives.

"There was maybe a little bit of being a little awed, playing with a college and NBA superstar, and him showing up and just wanting to play with us," Zehnder said.

"He was just really cool, and it felt like a game with just a couple guys. Obviously he’s a little better than us."