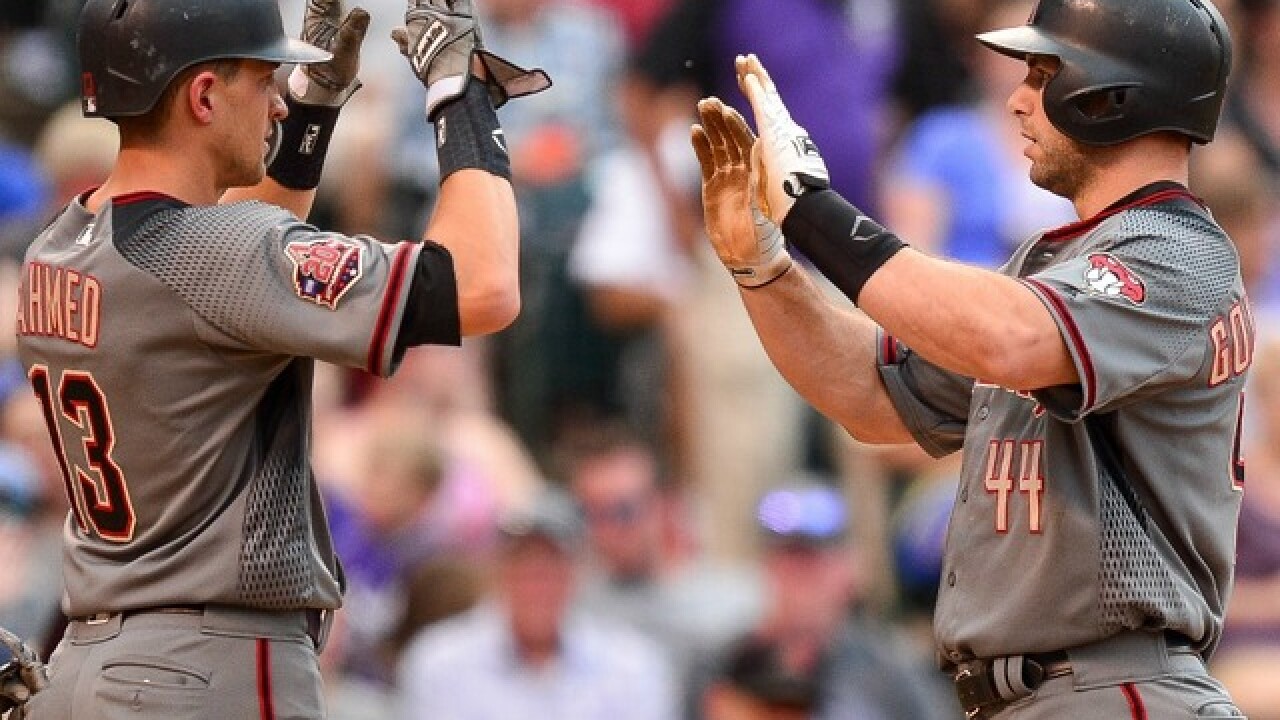 Copyright 2018 Scripps Media, Inc. All rights reserved. This material may not be published, broadcast, rewritten, or redistributed.
Dustin Bradford
<p>Paul Goldschmidt #44 of the Arizona Diamondbacks celebrates with Nick Ahmed #13 after hitting a fourth inning 3-run homerun against the Colorado Rockies at Coors Field on June 9, 2018 in Denver, Colorado. (Getty Images)</p>

If you believe in the various metrics available that predict every MLB team's odds of making the playoffs, you'll believe the Arizona Diamondbacks have about a 50/50 chance of advancing to the postseason, but are far less likely to win the National League West division.

As the D-backs get set to return to the field Friday after a five-day break for the MLB All-Star Game, they find themselves right in the thick of the NL West division race, as well as the NL Wild Card race. With a record of 53-44, they are just one-half game behind the Los Angeles Dodgers for the division lead, and one-half game out of the National League's second Wild Card spot, as well.

On the downside, the Dodgers' acquisition of Orioles slugger Manny Machado -- a player the D-backs also reportedly had as a trade target -- appears to have decidedly tilted the balance of power in the division in the Dodgers' favor.

In terms of simply making the playoffs -- i.e. advancing to the postseason as a division winner or a Wild Card (the D-backs did the latter last season) -- the D-backs' odds are roughly the same as calling a coin flip correctly. Baseball Prospectus gives the D-backs the best odds at 58.7 percent, and FiveThirtyEight has the D-backs at 51 percent. Fangraphs has them at 49.2 percent, and AccuScore has them at 47.2 percent.

As far as winning the NL West for the first time since 2011? Baseball Prospectus gives the D-backs a 27.5 percent chance of doing so, while FiveThirtyEight has the D-backs at 24 percent, AccuScore has them at 16.4 percent, and Fangraphs has them at just 11.8 percent. The Dodgers, who won the NL West last year and swept the D-backs out of the playoffs, are the heavy favorites in all four systems.

The D-backs will resume play Friday for the beginning of a three-game series against the Colorado Rockies at Chase Field. The Rockies trail the D-backs by just 1 1/2 games in the NL West.