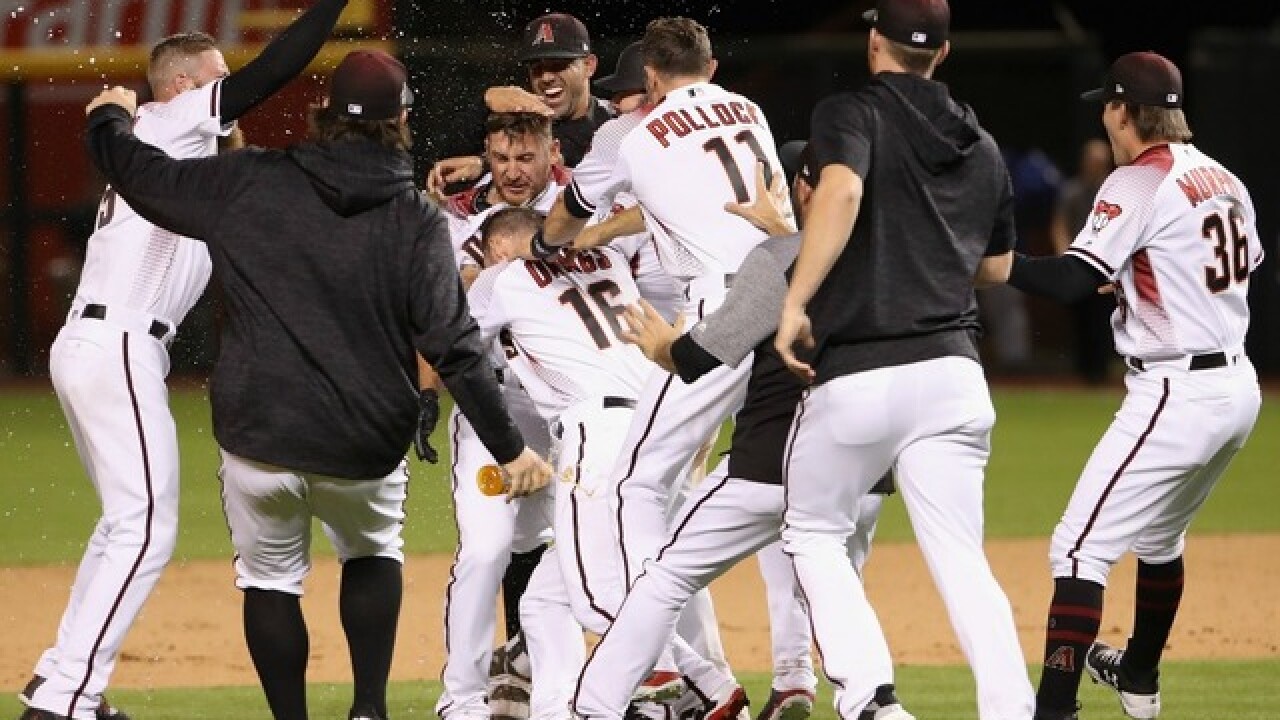 Copyright 2018 Scripps Media, Inc. All rights reserved. This material may not be published, broadcast, rewritten, or redistributed.
Christian Petersen
<p>Jeff Mathis #2 of the Arizona Diamondbacks is congratulated by teammates after a walk-off single to defeat the Los Angeles Dodgers 8-7 in the 15th inning of the MLB game at Chase Field on April 2, 2018 in Phoenix, Arizona. (Getty Images)</p>

Chris Owings hit a three-run homer off Kenley Jansen with two outs in the bottom of the ninth to force extra innings, and the Arizona Diamondbacks scored twice in the 15th to rally past the Los Angeles Dodgers 8-7 early Tuesday.

The first matchup between the teams since the NL champion Dodgers swept their Division Series last October became the longest game in Chase Field history at 5 hours, 45 minutes.

"We're down to barely nothing," Arizona manager Torey Lovullo said, "and these guys found a way to win the game. It's a special night."

Or, more accurately, a special morning.

Chase Utley's RBI single shortly after midnight put the Dodgers up 7-6 in the 15th, but Nick Ahmed's run-scoring double tied it in the bottom of the inning and pinch-hitter Jeff Mathis the last position player on the Arizona bench, singled home Ahmed with the game-winner.

C.O. might want to change his first name to Clutch after this. #GenerationDbacks pic.twitter.com/cX04N2iobD

Both teams used all their available relievers. Mathis was going to pitch if the game had remained tied.

Wilmer Font (0-1) threw four scoreless innings before giving up two runs in the 15th. Fernando Salas (1-1) went three innings to get the win.

Jansen blew one save in 42 opportunities last season, earning his second consecutive Trevor Hoffman NL reliever of the year award. But this season has not started well. The Dodgers' closer gave up a home run to Joe Panic in a 1-0 loss to San Francisco in his first outing last Friday, then squandered a three-run lead in his second on Monday night.

"I definitely know I'm fighting with some stuff," he said, explaining the timing of his delivery was a problem.

Both Jansen and manager Dave Roberts said the All-Star closer is healthy.

"I know that he's got pinpoint command, doesn't walk guys," Roberts said. "And I know there were some close calls tonight that didn't go his way. But regardless, Kenley still has the ability to throw strikes when he needs to. Just the pitch to Owings, it was a cutter that was down and in his nitro zone."

With the Dodgers up 6-3, Jansen got the first two batters to ground out but walked Paul Goldschmidt and A.J. Pollock, both on 3-2 counts, to bring up Owings, who hit the first pitch he saw into the left field seats.

Owings hit the 10th game-tying home run in D-backs history with two outs in the ninth inning, and just the second to do so with a three-run homer.

"That pitch was right where I was kind of looking," Owings said. "Definitely got us back in the game. From there, the rest is history."

Owings became just the fourth player to hit a three-run homer or better (grand slam) against Jansen, who was touched up a bit in the World Series last year, too. The right-hander gave up two homers, took a loss and blew one of his three save chances against the Houston Astros.

Yasiel Puig made two fine defensive plays for the Dodgers in the 14th, catching Goldschmidt's drive at the right-field fence and then throwing out Ketel Marte trying to advance to second on a deep flyout by Pollock.

Yasmani Grandal reached base in his first five plate appearances for the Dodgers, including a two-run homer in the first inning, but bounced out to second with runners on first and third to end the 10th.

Logan Forsythe also homered for Los Angeles, a solo shot off Yoshihisa Hirano to break a 3-all tie in the sixth.

Marte became the seventh Diamondbacks player to triple twice in a regular-season game. He also did it in last year's wild-card victory over Colorado.