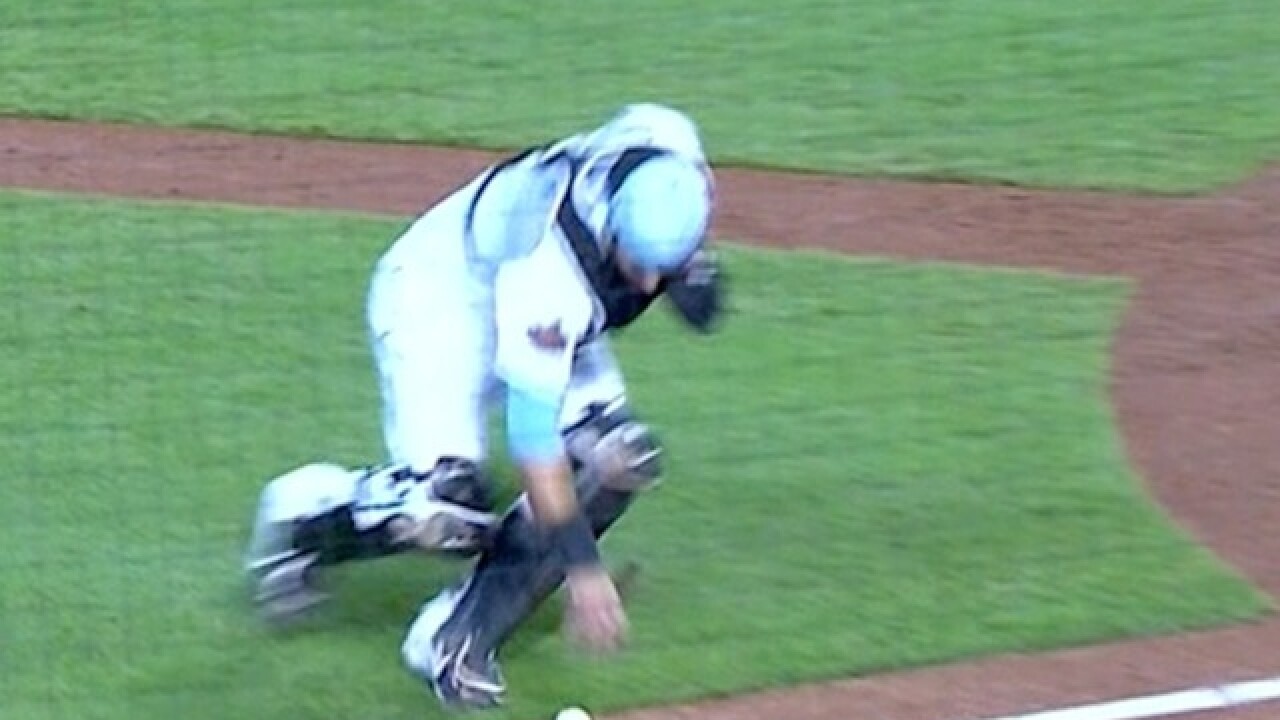 With just one out standing between the Diamondbacks and a home victory on Father's Day, closer Brad Boxberger gave up four straight hits, including back-to-back home runs, and the New York Mets rallied for a 5-3 victory in Phoenix.

But after the game, D-backs fans weren't nearly as upset with Boxberger as they were with the man behind the plate.

Leading 3-1 with two outs and with the bases empty in the top of the ninth inning, Mets shortstop Jose Reyes dropped a bunt down the third-base line. The ball appeared to be heading foul -- but D-backs catcher Alex Avila decided to pick up the ball in fair territory despite not having a play at first base. Reyes would score on a double by the following batter, Joey Bautista, and the Mets took a 4-3 lead on a home run by Brandon Nimmo. Asdrubal Cabrera added a home run of his own to make it 5-3.

Here's the play. Was it going foul? pic.twitter.com/L7jV61rnNw

"As soon as I turned around, I figured it was best to hold it. I wasn't going to have a play," Avila said after the game.

Avila's apparent mistake isn't the only reason he's drawn the ire of D-backs fans. The 31-year-old former All-Star came to the D-backs in the offseason via a two-year, $8.25 million deal. But he's hitting just .109 this season, and he went 0 for 4 on Sunday, including a strikeout and a double play. For reference, four of the D-backs' five starting pitchers have a better batting average than Avila does this season.

Here's a sampling of the replies to the D-backs' Twitter page after Sunday's loss.

Get Avila out of my city

AVILA sucks send him down to the minors or DFA him.

I’ve had it with it Avila. I’m just expecting every game he starts he does nothing productive offensively or defensively. Sure he might call a decent game but that’s not enough considering we’re paying more than the other catchers

Avila also heard boos from fans in attendance Sunday. After the game, he said the negativity doesn't bother him.

"I''ve been booed before. It just means they have expectations and they're not met," he said. "If you play long enough, you're going to get booed at some point, even by your home fans. I'm just trying to give them something to cheer about.

"I really haven't gone through (a slump) this lengthy, for sure. I've just got to keep plugging away. There's nothing really else to do but to keep working."

The D-backs fell to 39-32 with the loss but still have a 1 1/2-game lead of the Dodgers for first place in the National League West division. They now head to Anaheim for a pair of interleague games vs. the Angels on Monday and Tuesday.