Diamondbacks complete sweep of Pirates, but Buchholz leaves with injury 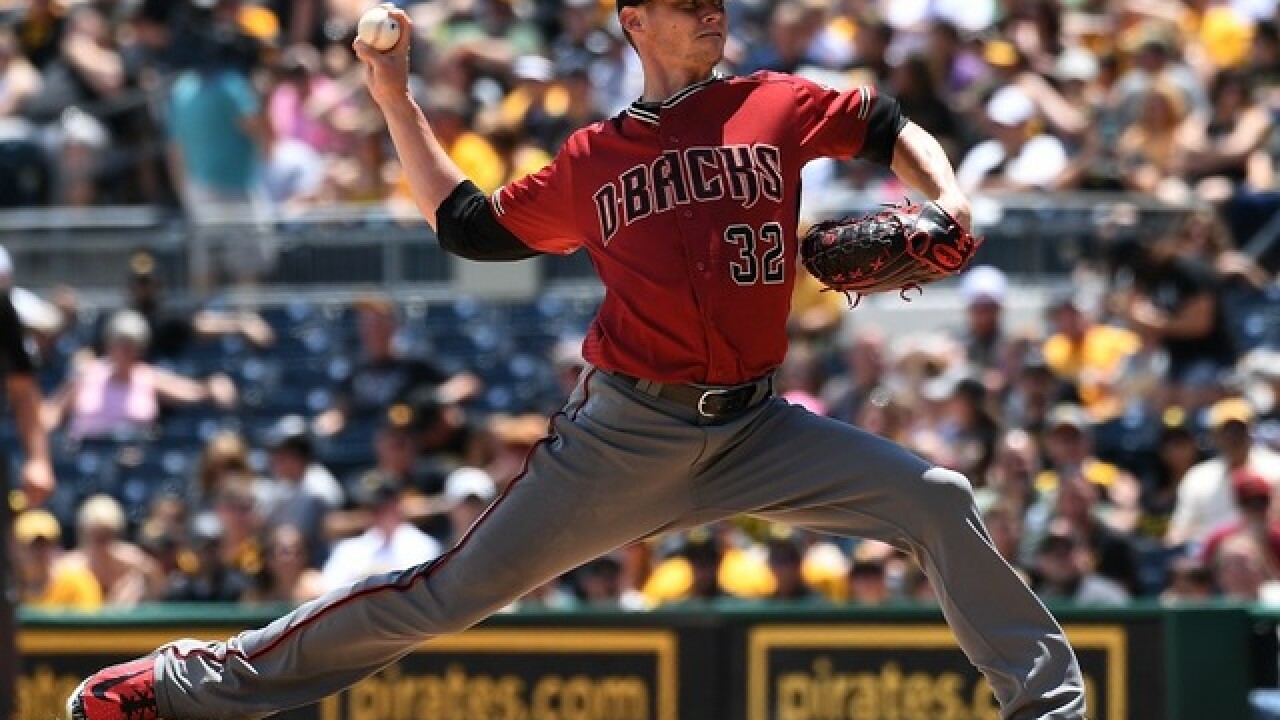 Copyright 2018 Scripps Media, Inc. All rights reserved. This material may not be published, broadcast, rewritten, or redistributed.
Justin Berl
<p>Clay Buchholz #32 of the Arizona Diamondbacks delivers a pitch in the first inning during the game against the Pittsburgh Pirates at PNC Park on June 24, 2018 in Pittsburgh, Pennsylvania. (Getty Images)</p>

Everything was going Clay Buchholz's way. Then, a swing-and-miss led to an injury that turned what could have been a gem into a routine solid outing.

Buchholz lasted five innings before experiencing tightness in his left side, but the Arizona Diamondbacks completed a four-game sweep of the Pittsburgh Pirates with a 3-0 win Sunday.

SEE ALSO: Diamondbacks will reportedly be aggressive in the trade market

The right-hander retired the first 11 batters he faced before Pirates centerfielder Starling Marte doubled down the right-field line with two out in the fourth inning. Despite throwing just 53 pitches (42 strikes), he was pulled to start the sixth inning after informing manager Torey Lovullo of some pain stemming from swinging at the first pitch of his at bat in the top of the fifth.

"I've had oblique, whatever it is, before. It was a lot worse than this one," Buchholz said. "I went out (in the bottom of the fifth) and the last two outs, that's whenever I felt it a little bit more. I was just trying to get through that inning. It's more precautionary. I've gone through things before where I've tried to get through it, pitch through it and go another inning, but that's always led me in the wrong direction."

Clay Buchholz on his injury and what his prognosis is moving forward. pic.twitter.com/ozyTHdJ7ot

Lovullo said Buchholz (2-1), who allowed two hits with five strikeouts in five innings for his first win since June 1, would continue to be evaluated throughout Sunday. More information is expected Monday.

"He was attacking the zone with the fastball and driving his fastball on both sides of the plate, and then throwing some quality secondary stuff," Lovullo said. "We want to give him a night to let everything calm down and evaluate him."

David Peralta's 15th home run, which carried over the wall in right-center field before bouncing into the Allegheny River, and John Ryan Murphy's ninth powered Arizona to its 12th win in 16 games.

You'll find that one down by the river. #GenerationDbacks pic.twitter.com/sAISEfLzB5

"It's nice to get a couple runs in the first, always," Murphy said. "I was leading off the second and was looking for a fastball. Got one in a pretty good spot."

Brad Boxberger let up a single to Austin Meadows with one out in the ninth before forcing Marte into a double play for his 17th save.

Pirates right-handed starter Trevor Williams (6-5) took the loss after allowing the two-run home run to Peralta with two out in the first inning and a lead-off solo homer to Murphy, which made it 3-0 in the second. Those three runs came on five hits in six innings pitched with six strikeouts.

"Unfortunately, that was the game today," Williams said. "From there on, I thought I was making all my pitches and being successful the second time through the lineup."

Pittsburgh has scored eight combined runs during its current five-game losing streak after winning four of its previous five games.