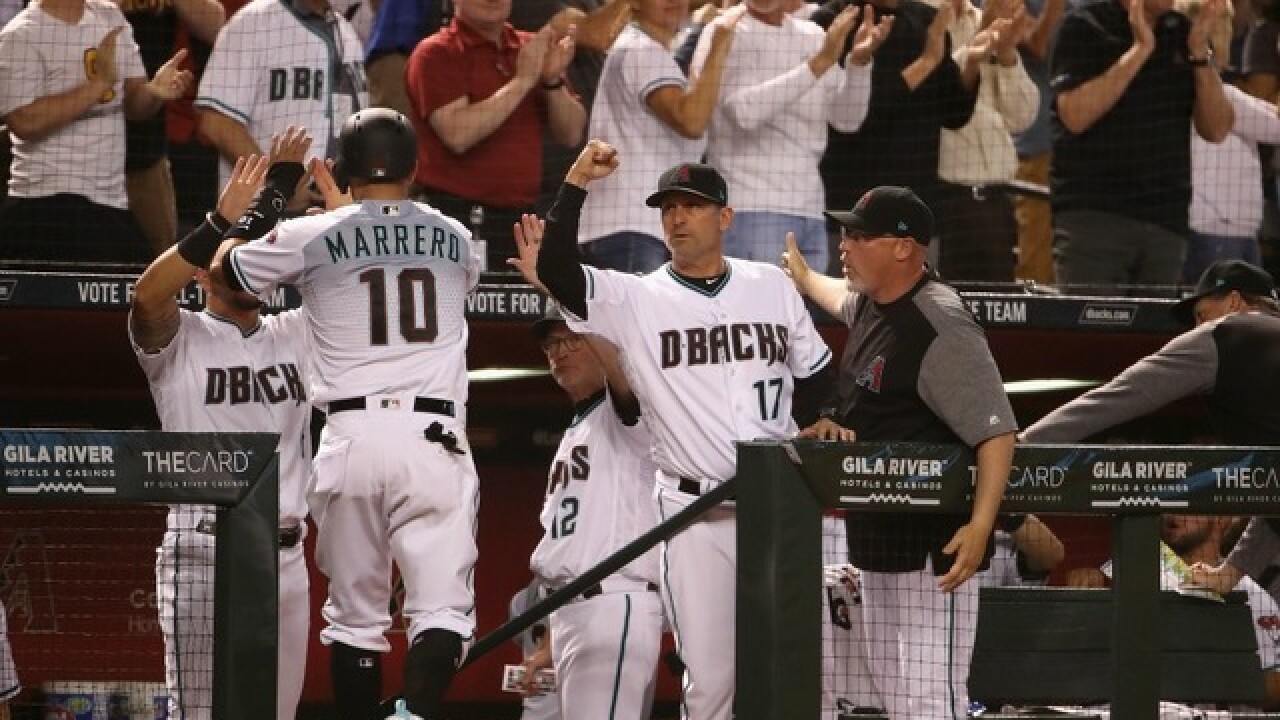 Copyright 2018 Scripps Media, Inc. All rights reserved. This material may not be published, broadcast, rewritten, or redistributed.
Christian Petersen
<p>Manager Torey Lovullo #17 of the Arizona Diamondbacks high fives Deven Marrero #10 after scoring against the Los Angeles Dodgers during the seventh inning of the MLB game at Chase Field on May 1, 2018 in Phoenix, Arizona. (Getty Images)</p>

Daniel Descalso atoned for a costly error with a two-run, go-ahead triple in the seventh inning and the Arizona Diamondbacks rallied to beat the Los Angeles Dodgers 4-3 on Tuesday night, handing the Dodgers their fourth straight loss and seventh in eight games.

The Diamondbacks won for the fifth time in six games, improving to 21-8, tied with Boston for best record in baseball and Arizona's best start through 29 games in the franchise's history.

A.J. Pollock homered for the fourth time in six at-bats -- after his three-homer performance the previous night -- and Christian Walker hit a towering pinch-hit solo shot measured by Statcast at 479 feet, the 10th-longest home run in Chase Field history and tied for the third-longest home run of the season.

Christian Walker unloads a solo home run to the second deck in left, bringing the D-backs within one run in the 5th (00:51)

The @Dbacks rally to again beat the Dodgers and their 21-8 record is the best 29-game start in team history. #GenerationDbacks pic.twitter.com/DJPccHCmVI

They were the only runs allowed by Clayton Kershaw, who gave up six hits, fanned six and walked one and remained 1-4. He left the game after six innings with a 3-2 lead.

Cody Bellinger hit a two-run homer for the Dodgers, who have lost seven of eight to Arizona this season.

Lefty Adam Libertore (1-1) relieved Kershaw and gave up singles to Deven Marrero and John Ryan Murphy to bring up Descalso, who lashed a triple into the right-field corner to bring home both runners and make it 4-3.

The Dodgers had gone up 3-1 with an unearned run when Descalso dropped Chase Utley's fly ball in left. Utley took second on the play, advanced to third on a ground out and scored when second baseman Ketel Marte made a diving stop of Matt Muncy's grounder.

The Diamondbacks have opened the season with nine straight series victories, the first NL team to do so since the 1907 Chicago Cubs. They can make it 10 in a row with a victory either Wednesday or Thursday in the four-game set.

Pollock's home run, leading off the second inning, gave Arizona a 1-0 lead. It was his first homer off Kershaw in 38 career at bats and kept Pollock tied for the NL lead in homers with 10.

The Dodgers bounced back in the third. After Chris Taylor's second single of the night was erased with a double play, Yasmani Grandal walked and Bellinger followed with a booming home run just inside the foul pole in right field and Los Angeles led 2-1.