Cowboys quarterback Dak Prescott: 'I'd never protest during the anthem' 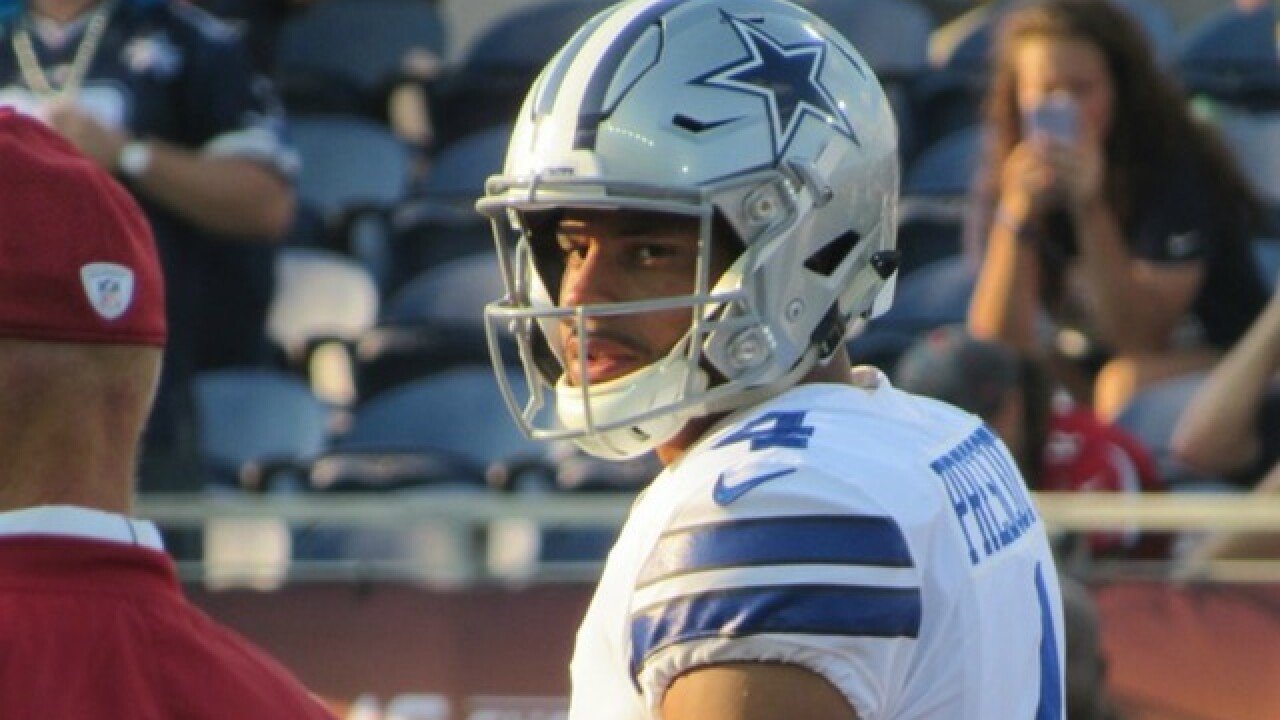 Dak Prescott's best test yet as the new face of the Cowboys came two days after owner Jerry Jones once again declared that all Dallas players will stand for the national anthem and even said they wouldn't be afforded the alternative of staying in the locker room.

The star quarterback didn't pause or stammer. He didn't stop himself to consider what his peers might think. He made it clear he will stand, and doesn't think it's right to do otherwise.

"Whether I was wearing the star or not, whether I was playing for Jerry Jones, Stephen Jones or any other owner, I believe in what I believe in and that's that," Prescott said Friday in his first session with reporters at training camp.

Jerry Jones held his usual camp-opening news conference Wednesday, and said his usual things about the anthem, and then some. Son Stephen Jones, executive vice president of personnel, suggested a day later that the Cowboys would cut any player who stayed in the locker room.

The option of staying off the field was part of a policy owners approved in May, but was put on hold not long after The Associated Press revealed that the Miami Dolphins would consider suspending players up to four games for kneeling or otherwise protesting during the anthem.

Just as he did when he showed up two years ago as the overshadowed third quarterback on Tony Romo's team, Prescott offered his opinion plainly and simply, and in so many words. There are countless more people listening now.

"He knows how important that is to be one of the faces of the team and he always does exactly what you'd expect, to a script," offensive coordinator Scott Linehan said. "It's not forced. It's just part of him."

Prescott replaced an injured Romo in 2016 and had one of the best rookie seasons for a quarterback in NFL history while leading Dallas to an NFC-best 13 wins and ultimately sending Romo into retirement.

Now  15-year tight end Jason Witten  and  franchise touchdown catch leader Dez Bryant  are gone. The former Mississippi State standout is the leading voice, and not hesitating to use it.

"I'd never protest during the anthem, and I don't think that's the time or the venue to do so," Prescott said while adding that he respected the right of others to protest. "We know about social injustice. I'm up for taking a next step, whatever that step may be for action and not just kneeling."

Prescott didn't have any immediate specifics for that community action, but it'll be a few months before he can concentrate on it fully. Right now he's trying to get the Cowboys back to the playoffs after his encore fell flat.

Dallas missed the postseason at 9-7 last season, clouded by the fight over the six-game suspension that Prescott's fellow rookie sensation, running back Ezekiel Elliott, finally had to serve halfway through the year.

"It was just a lot of mental mistakes, a lot of things that I feel like I don't normally do," said Prescott, who had 13 interceptions a year after throwing just four while setting an NFL rookie record for passer rating. "I feel like I thought a lot about different things last year within the games and that's something I'm going to try to eliminate."

The Cowboys are unproven at tight end and receiver after Witten retired and the Cowboys decided to release Bryant in a cost-cutting move. Cole Beasley has the longest Dallas tenure among the receivers, and Terrance Williams is the only other pass-catcher who was on the roster for Prescott's rookie season.

"Really last year was a struggle. He had some breakdowns at other spots that made it tough on him," Beasley said. "Good or bad or ugly, he's the same person through and through. That's what you want from your quarterback. Because that's how it is in games."

Elliott doesn't have a possible suspension looming this season, and at the moment an offensive line that was an issue a year ago is healthy with a new piece in second-round pick Connor Williams. The former Texas player is working as the starting left guard in camp.

Not long before coming to California, Prescott spent time with some of his untested receiving corps in Florida. Now he goes about figuring out life without Witten and Bryant.

"We're past that," he said. "We had the whole (offseason practices) and minicamps to kind of get over that stage. Those are guys I've said before you can't replace. But when you get out here, you just see the youthfulness that we have, how young this team is and the energy."

With a new leading voice.