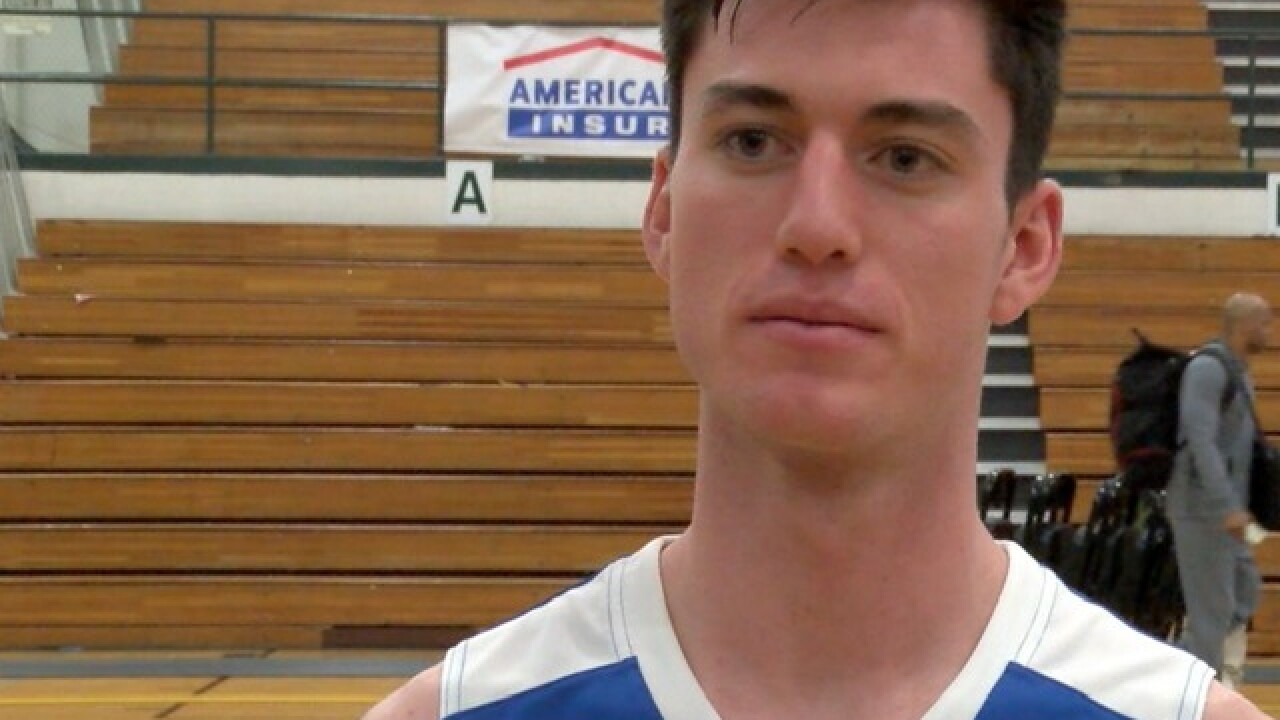 Oregon Ducks guard Casey Benson did everything he could to convince his former Tempe Corona Del Sol High School teammate Alex Barcello to follow him to Eugene.

"While they were recruiting me, he was pretty hard on me (to come to Oregon)," said Barcello, who was named the 2017 Arizona Gatorade Player of the Year, three years after Benson won the same award.

But Barcello couldn't resist the allure of staying in state to play for coach Sean Miller and the Arizona Wildcats -- and he said the incoming 2017-18 recruiting class is on a mission to deliver that Final Four appearance that's still conspicuously missing from Miller's otherwise-impressive résumé.

"And just the fans. I mean, the fans are unbelievably amazing. I'm just looking forward to heading down there and playing my first game."

A 6-foot-2, 165-pound shooting guard, Barcello has averaged 24.2 points, 5.8 rebounds and three assists per game during his senior season at Corona. He's a sharpshooter who competed in the American Family Insurance High School 3-Point Championship at Greenway High School on Friday -- but his passing and ball-handling skills are also off the charts.

A four-star recruit, Barcello chose Arizona over nearly two dozen offers from other schools, including Oregon, Indiana, USC, Utah, Arizona State and Grand Canyon. He said Arizona freshman Rawle Alkins was influential in his decision, and he hopes Alkins puts the NBA Draft on hold for at least one more year so the two can play together in Tucson.

But it's Miller's coaching style that convinced Barcello that UA was the right choice.

"He holds you accountable. He cares about you on and off the court. He's a very personable coach," he said.

"He's honest with you. I love how honest he is with me. I mean, the truth hurts sometimes. He'll tell you (the truth) no matter if it hurts or if it's good, so I love that about him."

On Thursday, as his Ducks prepare to take on North Carolina in the Final Four, Benson said Barcello has a bright future in Tucson.

"Alex had a great high school career. I knew he would," said Benson, who was a senior at Corona when Barcello was a freshman. "I'm excited for him and his next step at Arizona, and I hope the best for him."

Even though he didn't follow his former teammate to Oregon, Barcello said the single season he played alongside Benson at Corona helped mold him into the player he's become.

"It was great. Great competition in practice every day. He's a phenomenal player," he said.

"Great talent. Smart IQ. I knew he was gonna do well in Oregon and he's shown the whole country that, so I'm very proud and happy for him."

When he arrives in Tucson, Barcello's mission is to help get Arizona get to the same place Benson's Ducks are right now: the Final Four, where the Wildcats haven't been since 2001, and where Miller has never been in his 13-year head coaching career.

The Cats came two games short of that goal this season, but they should be well-equipped to make another run in 2017-18. Along with Barcello, UA's incoming recruiting class is comprised of 7-foot Phoenix Hillcrest Prep star DeAndre Ayton, center Ira Lee and guard Brandon Randolph. Collectively, they are ranked by multiple outlets as the nation's No. 3 class.

Barcello said he and his fellow commits are a tight-knit group -- and their sole focus is bringing a Final Four appearance and national championship to Tucson.

"I'm excited to play with our recruiting class just because I'm close with the guys -- DeAndre, Ira and Brandon. I'm just excited to see what we can accomplish there," he said.

"We have this conversation with our recruiting class a lot -- DeAndre, Ira, Brandon and I. We really wanted them to win it this year just because they're our team, but we think it'd be really special for us to come in and help be a part of that."