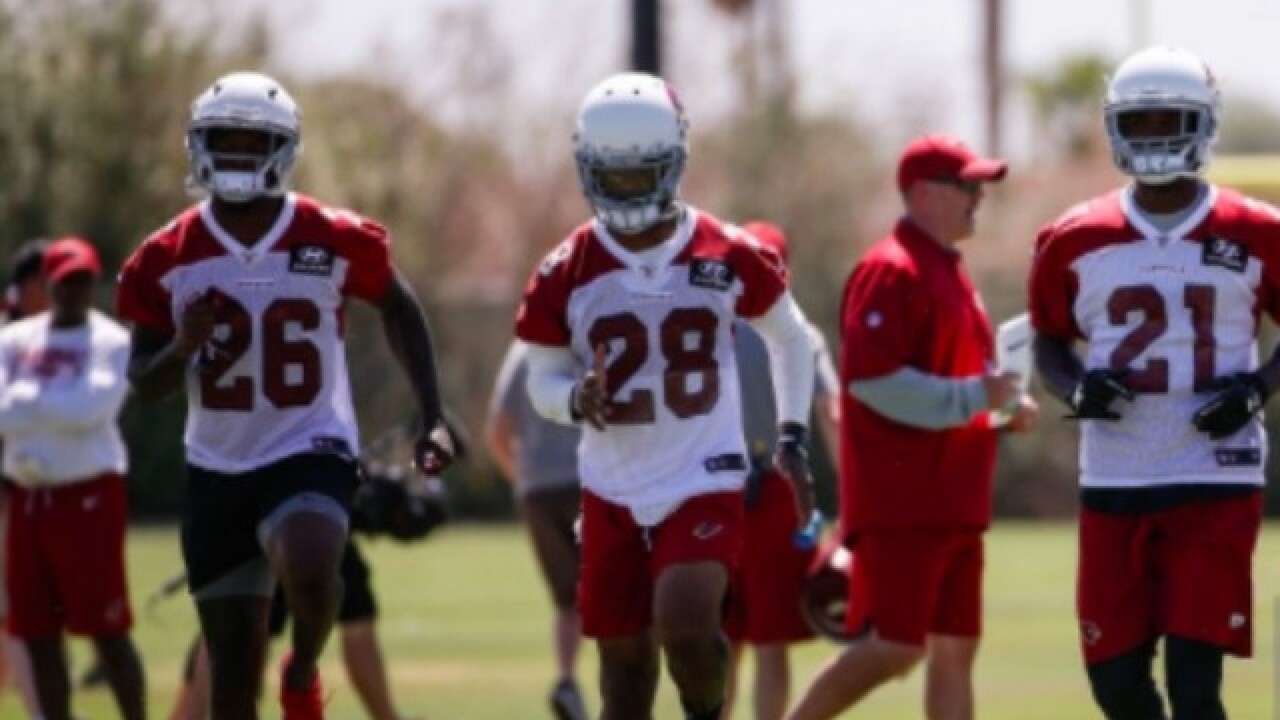 The Arizona Cardinals, with running back David Johnson still a no-show, wrapped up their first minicamp under new coach Steve Wilks on Thursday with another workout in the scorching heat.

With the high approaching 110 degrees a couple of hours later, the Cardinals practiced in the late morning hours with Wilks disdaining using the nearby practice bubble.

"It was hot today," Wilks said. "But it's part of us building that mental toughness. There are going to be certain times down in Glendale (for training camp) that we're going to get outside as well."

Johnson, entering his fourth NFL season, participated in all the voluntary workouts except the last one, when he stood on the sideline watching. He didn't show up for any of the three mandatory minicamps, which will result in fines, as his agent tries to get a better contract.

He's scheduled to make $1.9 million this season, far less than what the other top running backs in the league earn but his situation is complicated by missing virtually all of his most recent season.

"Everyone has their personal reasons," cornerback Patrick Peterson said. "I just hope David and his team figure it out and hopefully we'll have him here by camp."

The Cardinals report to training camp July 27 at University of Phoenix Stadium in Glendale, their regular-season home. The players stay in a nearby hotel.

Bradford, signed as a free agent to be the starter, was limited in voluntary workouts as he works his way back from a knee injury. But he was used more in the minicamp.

"Sam did a little bit more today," Wilks said. "I'm very pleased in his performance. He's doing some great things out there. Again, just identifying the defense, getting the offense in the right position, taking control, which I like. He made some great throws, good accuracy."

Glennon was signed as the backup but will be pushed by Rosen. Rosen, the first-round draft pick who has been praised for his ability to quickly pick up the offense and make the right decisions as he got more reps because of Bradford's situation.

Wilks has not talked about Johnson, saying his emphasis is on the players who were at minicamp. But the ground game appears to be the central component of the offense being installed by new coordinator Mike McCoy.

Wilks praised the work of the revamped offensive line, even though it's hard to reach too big a conclusion with the team not yet in pads.

"The point of emphasis from day one is we want to run the ball," Wilks said.

The players go their separate ways for the next six weeks. Peterson said he's headed to Monaco to celebrate his sixth wedding anniversary, then he will meet up with Larry Fitzgerald to play golf at St. Andrews in Scotland.

Inside linebacker Deone Bucannon, who will call the defensive signals, said he's going to Southern California to work out there.

The players are allowed to keep their iPads to study the playbook while they're gone.

Wilks, the defensive coordinator at Carolina last season, noted that three of his leading players ranked high in the new top 100 players list compiled by the NFL Network. Peterson comes in at No. 23, Fitzgerald No. 27 and defensive end Chandler Jones No. 28.

"That's very impressive," Wilks said. "And you have other guys that are emerging like Bucannon, (Haason) Reddick, Budda Baker, those guys. And you still have a quality quarterback in my opinion in Sam Bradford.

"So we have great personnel. We have good core guys and we have a great supporting cast. So I'm excited about our roster."

Whenever Johnson returns, expect the coach to start talking him up again, too.