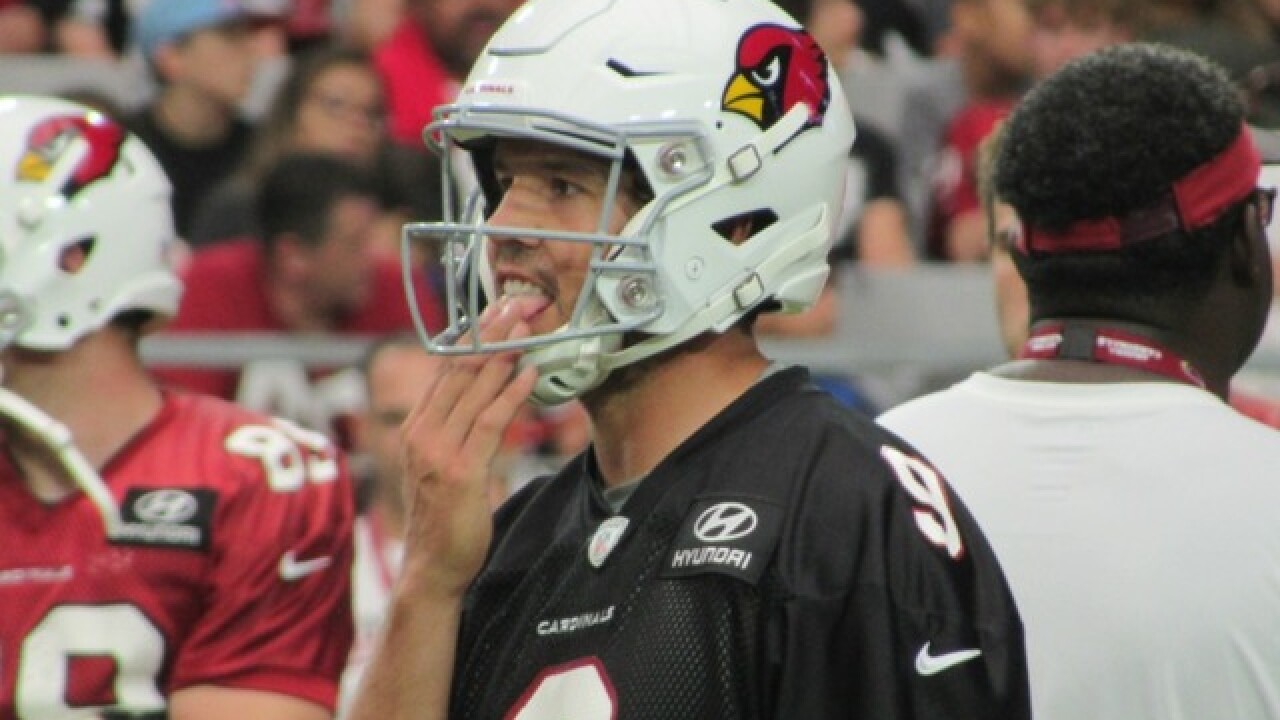 If he stays healthy.

Those words have shadowed Sam Bradford through most of his injury-plagued eight seasons in the NFL.

And it looms large again as the 30-year-old quarterback went through the first practice of Arizona Cardinals training camp Saturday.

"I think you have to be optimistic," he said. "I think if you're not optimistic, then the odds of staying healthy and the odds of playing well, they're probably not that great."

Injuries have limited Bradford to 80 games in his eight seasons. He's twice torn the anterior cruciate ligament in his left knee, and another left knee injury wiped out nearly all of his 2017 season in Minnesota.

When the Cardinals found themselves without any quarterbacks following the retirement of Carson Palmer, they turned to Bradford, who -- when healthy -- has put up strong numbers.

But Arizona also pulled off a deal that got them Josh Rosen in the draft, and Rosen has been impressive in offseason workouts. But for now, this is Bradford's team.

"I want Josh with the mentality that he wants to start," first-year Cardinals coach Steve Wilks said. "I don't waver that Sam is our starter. It's his job to lose and competition makes us better across the board."

The Cardinals brought Bradford along slowly in the offseason and didn't make him a full participant in workouts until the three-day mandatory minicamp.

It is a story that won’t end until it ends: Bradford or Rosen. For now, it’s Bradford. @nflnetwork pic.twitter.com/82YaR2uLSG

"His knee, talking to him, is stronger than it's ever been," Wilks said. "I think the plan that we created and put in place for him back when we signed him has been phenomenal, just with the training staff, physical therapy, strength and conditioning."

Bradford would say only that his knee feels the best it has since the injury.

"I feel good right now," he said. "My body's' in a good place and I think now we'll see the benefits of the plan we had throughout OTAs and throughout the spring."

Bradford signed a two-year, $40 million contract with the Cardinals, with $15 million guaranteed. But this is about more than money for Bradford, whose career earnings are listed at $124 million. He signed the largest rookie deal in history as the No. 1 overall pick in 2010, a contract that guaranteed him $50 million before he threw a pass.

The next season, rookie contracts were slotted at lower levels as part of the new labor agreement.

So what keeps Bradford going, rehab after grueling rehab?

"Just getting back out there and playing football," he said. "I think you just realize how much you enjoy it, how special it is to be out there, to play the game. That's really why I do this, why I continue to come back, it's to be there on Sundays and to be out there with my guys and play football again."

Bradford's love of the game is clear to Wilks.

"That's what you see," the coach said. "He's made enough money that he's taken care of his family for the rest of his life. But his passion and love for the game and wanting to compete -- and I think he has a lot doubters out there."

When he can play, Bradford plays well.

Since the end of OTAs, he's kept up individual workouts, simulating quarterback moves as he works to further strengthen his knee. Bradford understands that injuries come with his line of work.

"They happen. It's football," he said. "That's not really where my mind is. It's not something I think about. My mindset is just going out to practice every day, learning as much about this offense as I can, being a good teammate, being a good leader, being as good a quarterback as I can be."