Copyright 2018 Scripps Media, Inc. All rights reserved. This material may not be published, broadcast, rewritten, or redistributed.
Justin K. Aller
<p>Antonio Brown #84 of the Pittsburgh Steelers jokes around before a preseason game against the Carolina Panthers on August 30, 2018 at Heinz Field in Pittsburgh, Pennsylvania. (Getty Images)</p>
Posted at 4:55 PM, Sep 18, 2018

A possible rift between star wide receiver Antonio Brown and the Pittsburgh Steelers has led to speculation that Brown could be traded -- and according to one oddsmaking site, the Arizona Cardinals are among the favorites to land Brown's services if that happens.

On Tuesday, Bookmaker.eu set betting odds for which team Brown will play for on Nov. 15 -- the middle of the 2018 NFL season. As of 4 p.m. Arizona time on Tuesday, the Cardinals are even with the Cleveland Browns as favorites to land Brown if he's traded, with both teams getting 10/1 odds. However, the Steelers are currently the overwhelming favorites to retain Brown (1/20 odds). 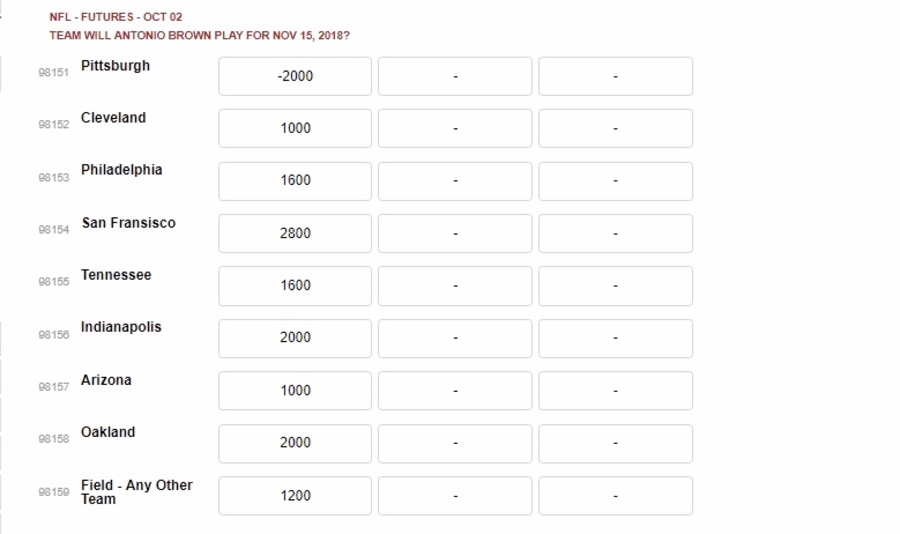 The Cardinals, who are off to an 0-2 start and have scored just six points in their first two games, could certainly use the help on offense, especially with Larry Fitzgerald nursing a hamstring injury.

The 30-year-old Brown is a six-time Pro Bowl selection and a four-time First-Team All-Pro pick. He has twice led the NFL in both receptions and receiving yards.

Tension between the Steelers and Brown appeared to rise Monday when Brown was absent from the team's practice, and Brown appeared to hint at a desire to be traded via social media. Brown's agent, Drew Rosenhaus, issued a statement Tuesday stating that Brown does not want to be traded, and his absence Monday was the result of a personal matter unrelated to the Steelers.

Trade me let’s find out https://t.co/4OeepI78zy