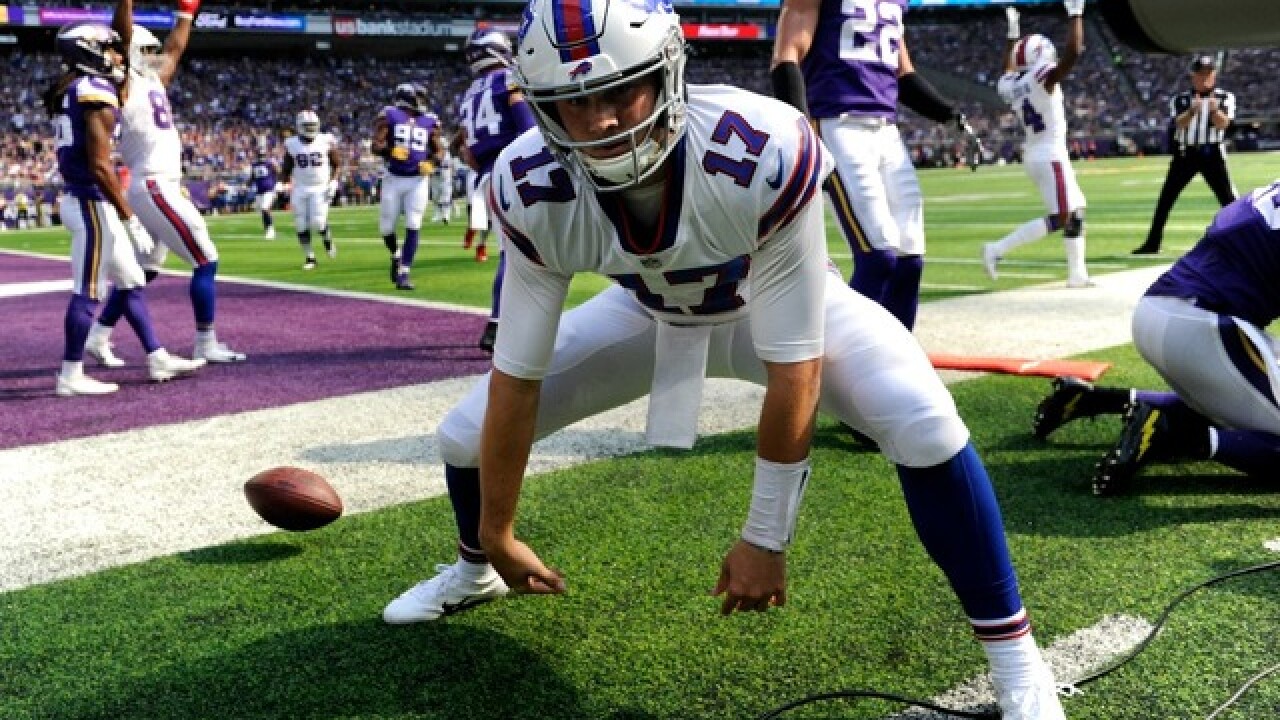 Copyright 2018 Scripps Media, Inc. All rights reserved. This material may not be published, broadcast, rewritten, or redistributed.
Hannah Foslien
<p>Josh Allen #17 of the Buffalo Bills celebrates after scoring a touchdown in the first quarter of the game against the Minnesota Vikings at U.S. Bank Stadium on September 23, 2018 in Minneapolis, Minnesota. (Getty Images)</p>

Josh Allen played with the poise of a well-seasoned quarterback for the Buffalo Bills by accounting for three touchdowns in his first road start in the NFL. Allen made Minnesota’s Kirk Cousins look like the raw rookie in a stunning 27-6 upset of the Vikings on Sunday afternoon.

Cousins had three turnovers, including a lost fumble on a third-down sack inside Minnesota’s 20-yard line, on each of the first two possessions. Buffalo turned those recoveries into 10 points and was on cruise control by midway through the second quarter as the crowd at U.S. Bank Stadium cranked up the boos.

The Vikings (1-1-1) were 16½-point favorites when the game began, allowing the Bills (1-2) to become only the sixth such underdog in the NFL’s last 81 point spreads that big. It's the NFL's biggest upset since Dec. 3, 1995, when the 17.5-point underdog Washington Redskins beat the Dallas Cowboys.

. @JoshAllenQB led the @BuffaloBills to an upset victory in Minnesota.

Underdogs of at least two TDs that went on to win — from ⁦ @ActionNetworkHQ ⁩. pic.twitter.com/GI2RTW71kY

After being outscored 75-9 over their first six quarters of the season, the Bills have enjoyed a 41-9 advantage over the last six periods.

Allen, the seventh overall pick in the draft out of Wyoming who took the job earlier than expected in relief of a struggling Nathan Peterman in the opener, completed 15 of 22 passes for 196 yards, including a 26-yard touchdown pass to wide-open tight end Jason Croom.

Though Allen took three sacks and fumbled three times, the Bills were able to recover all of them. He settled almost exclusively for safe underneath or sideline throws, but took advantage of several broken coverages by the Vikings for chain-moving gains.

Where Allen did the most damage was on the ground, putting together a mini-highlight film with his feet while injured running back LeSean McCoy watched in team-colored sweats — with a big smile — from the sideline. Allen dived to finish a 10-yard run by beating Anthony Barr to the edge of the end zone and scraping the pylon with the ball to finish the game’s first drive.

At the end of the first quarter on third-and-9, Allen sprinted straight up the middle out of a collapsed pocket and hurdled Barr 2 yards short of the marker to get the first down. He capped that possession with a 1-yard touchdown sneak on fourth down for a 24-0 lead in the second quarter.

Allen became the first Bills rookie to run and pass for at least one score each in his first career road start.

With running back Dalvin Cook (hamstring) inactive and the score so lopsided, the Vikings set a franchise record for fewest rushing attempts with six. Cousins took four sacks.