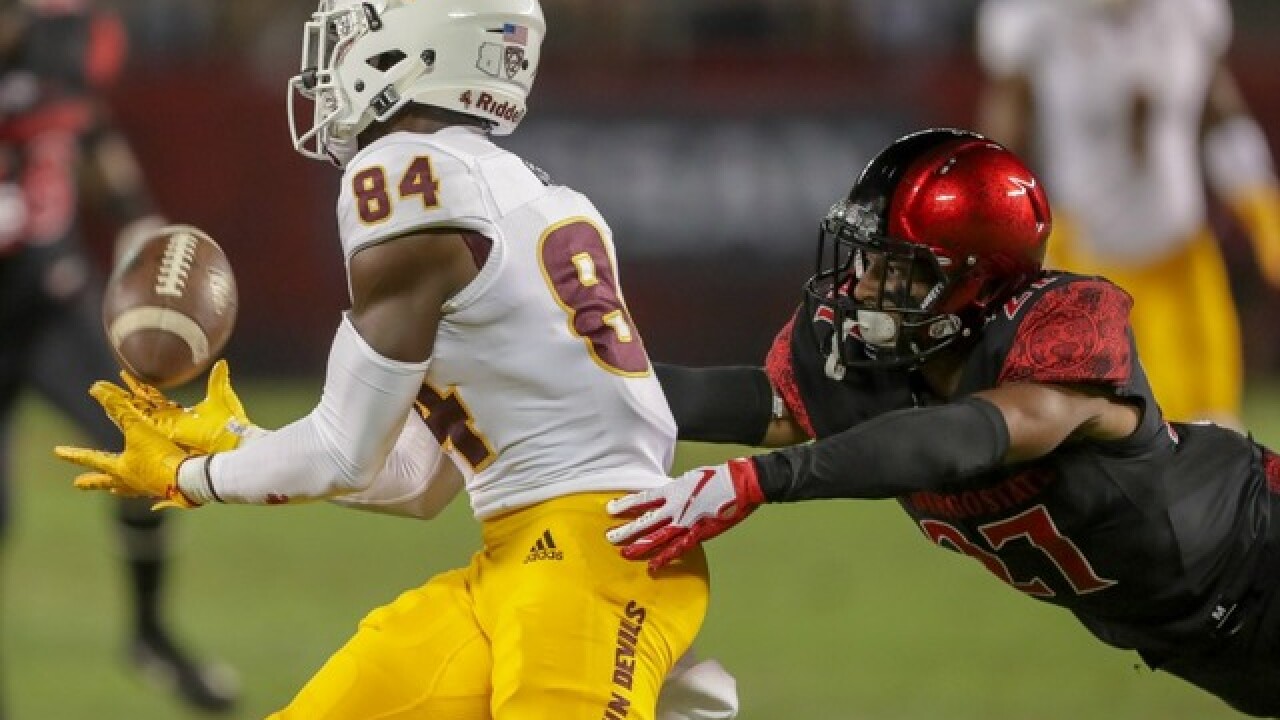 The Arizona State Sun Devils lost their first game of the season in excruciating fashion on Saturday night -- and fans were beside themselves with the way the final seconds of that defeat played out.

Trailing 28-14 late in the game, ASU looked to be well on its way to defeat vs. host San Diego State. But a Sun Devil touchdown with just under two minutes left, followed by a fumble recovery with 43 seconds to play, gave ASU life.

With 14 seconds left, QB Manny Wilkins threw a long pass from midfield that appeared to be caught by receiver Frank Darby at the 2-yard line, and SDSU's Trenton Thompson was called for a targeting penalty on the play for his hit on Darby. Targeting calls are automatically reviewed -- and upon review, the penalty was confirmed, but Darby's catch was ruled incomplete, as officials determined the ball had touched the ground.

ASU still had one last chance, but Wilkins' Hail Mary pass was knocked down in the end zone, and the No. 23 Devils went on to lose 28-21 for Herm Edwards' first defeat as ASU head coach.

THAT JUST HAPPENED. This Arizona State pass was ruled incomplete after review. pic.twitter.com/YsC4kzEROV

Another great angle of the pass that was ruled incomplete https://t.co/IkgpsNtaNl

It all comes down to this. One last try for Arizona State. @SDSUFootball hangs on to UPSET the Sun Devils.

Many Sun Devil fans on social media were irate by the late call, believing Darby's catch should have been upheld, and San Diego State shouldn't have essentially been rewarded for a dirty late-game hit.

“Incomplete? Like, huh? I thought they was really going over the targeting, that’s all I was worried about,” Darby said, per ArizonaSports.com. “They took my incomplete pass, like huh? … That hurt me. That hurt me, man. Now I feel like they was on (SDSU’s) side, man. But I can only control what I can control.”

"They look at everything. And that happens. That's the rule. They're gonna look at every facet of the play, and it just happened to be they said he didn't catch it. We thought he had caught it," Edwards said after the game, per Devils in Detail's Ethan Schmidt.

ASU did, however, squander opportunities to avoid the late-game drama. Leading 14-7 late in the first half, the Devils went for it on fourth and 1 rather than kicking a short field goal. San Diego State held ASU short, and went on to score a touchdown before halftime to tie the game. The Aztecs controlled the game with a strong rushing offense and outstanding defense in the second half, and the Devils didn't pick up a first down in the second half until late in the fourth quarter.

In any event, the road won't get any easier for the Sun Devils next week, as they'll head to Seattle to face No. 10 Washington next Saturday.