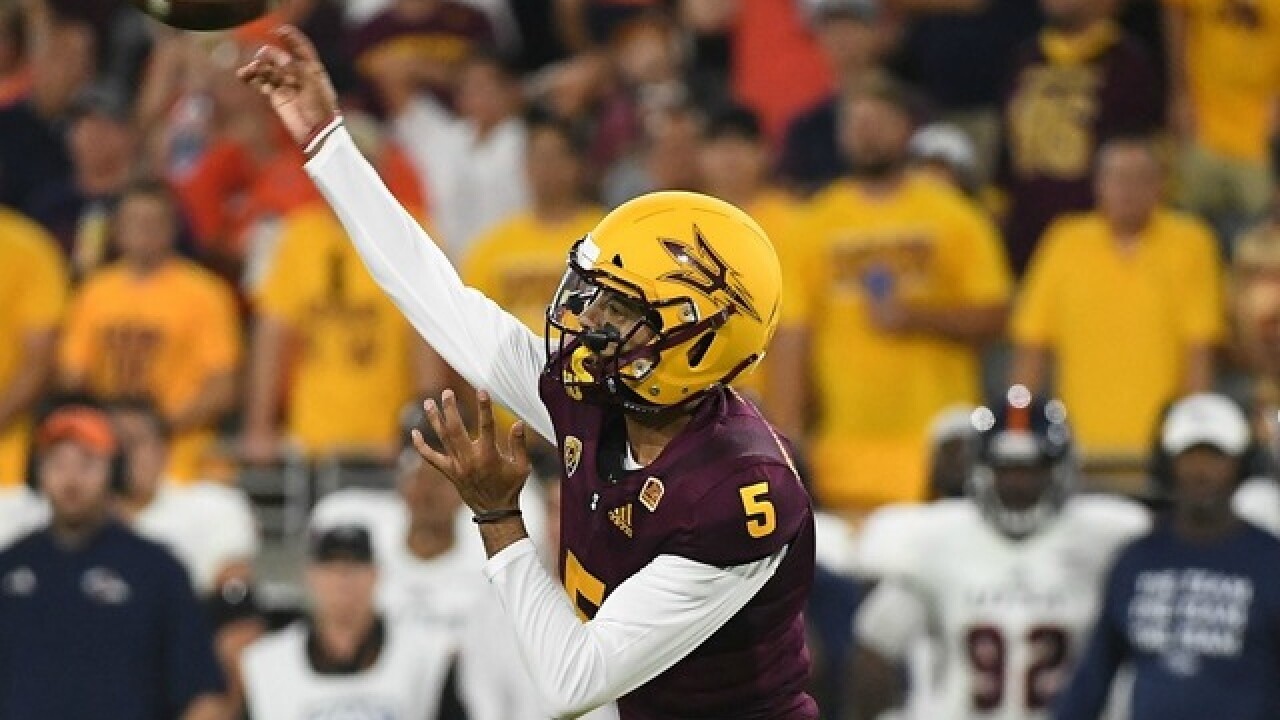 Copyright 2018 Scripps Media, Inc. All rights reserved. This material may not be published, broadcast, rewritten, or redistributed.
Jennifer Stewart
<p>Quarterback Manny Wilkins #5 of the Arizona State Sun Devils makes a pass in the first half of the game against the UTSA Roadrunners at Sun Devil Stadium on September 1, 2018 in Tempe, Arizona. (Getty Images)</p>

The hype began when Herm Edwards interviewed for the job at Arizona State. It ratcheted it up when he was officially hired and continued through the offseason, into preseason camp.

Everyone wondered how the former NFL coach would fare in the unfamiliar world of college football after eight years in a television studio.

Would the Sun Devils' outside-the-box move be a stroke of genius or explode in their faces?

It's looking good after one game.

Yes, Arizona State's 49-7 opening victory over UTSA on Saturday night came against an overmatched opponent in front of a pro-ASU home crowd. But as era openers go, it could not have gone much better.

Now it's time to move on. A football season has no letups and Edwards knows it. Win and turn your attention forward, get ready for the next one.

"You can't live on what you did in the past, where you stay the same, somebody passes you up," Edwards said during his weekly news conference.

"Success can be a disease if you allow it. It can overtake you, make you think you've arrived when you really haven't. You've never arrived. There's always something else you want. You love the feeling of success, so what does it take to have some more success? Successful teams understand that. You won a football game. That's fantastic. Now you've got to try to win another one against a really good football team."

Up next for the Sun Devils is No. 15 Michigan State on Saturday in Tempe. The Spartans will be a huge upgrade in opponent, even after they needed a late touchdown to hold off Utah State in their opener.

Michigan State is big up front, stingy defensively, likes to pound the run game until opposing defenses are ready to give up -- a prototypical Big Ten team and a step up in competition for Arizona State from its opener.

"They're Michigan State," Edwards said. "They have a brand of how they're going to play and they're not going to change that. And that's why they are so consistent with winning a lot of games."

Arizona State won its opener with the kind of offensive balance Edwards wants.

Manny Wilkins threw for 237 yards, four touchdowns and had no interceptions. N'Keal Harry was unstoppable at times, catching six passes for 140 yards and two touchdowns, including one where he was surrounded by defenders and somehow found his way to the end zone.

Eno Benjamin ran for 131 yards and a touchdown on 16 carries, and the Sun Devils had 266 yards on the ground. Arizona State went into a bit of a lull in the second quarter, but still managed to lead 28-0 at halftime and outgain UTSA 503-220 overall.

"Our rule is, throw to score and run to win," Edwards said. "We were able to do both."

Arizona State's defense shut down UTSA for the most part and got an early interception return for a touchdown by Shannon Forman.

But this week presents a bigger challenge on both sides of the ball.

Michigan State may not have been at its best in its opener, but still racked up 452 yards of total offense and controlled the ball for nearly 38 minutes. The Spartans are experienced with 10 starters back on offense and nine on defense, and are used to playing in hostile environments.

"They're a team that understands who they are," Edwards said. "Teams that have success worry about the opponent; this is who we are. Generally when you build your DNA that way, you're able to recruit players like that and it just kind of works."

Edwards is trying to get it to work like that in the desert. It has, so far.