Steph Curry and the Golden State Warriors have won two of their previous three meetings with LeBron James and the Cleveland Cavaliers in the NBA Finals -- and former ASU football star Damarious Randall is apparently certain the Warriors will make it three out of four.

So certain, in fact, that he made quite the guarantee via Twitter on Monday night.

After the Warriors advanced to the Finals on Monday night, Randall, a former first-round NFL Draft pick who was traded from the Green Bay Packers to the Cleveland Browns in March, made the following guarantee on Twitter: "If the Cleveland Cavaliers win the 2018 NBA finals I’ll buy everyone who retweets this a jersey..." 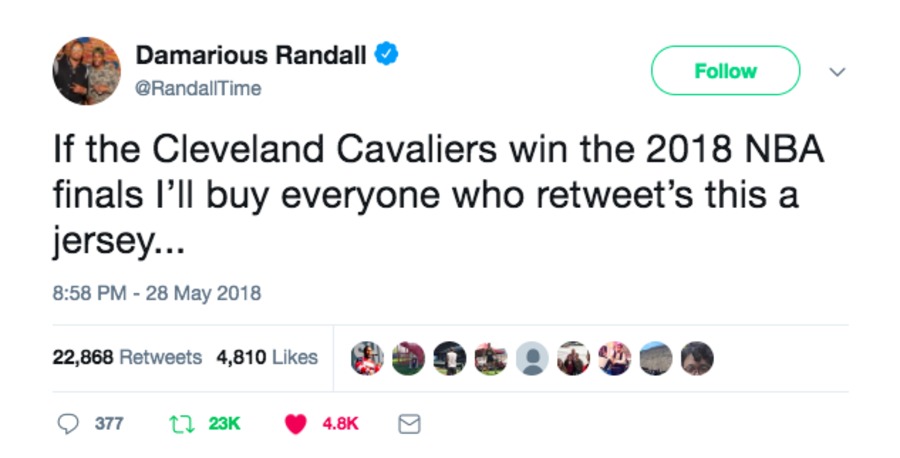 As of late Monday evening, Randall's tweet had been retweeted nearly 23,000 times. That means that, if the Cavs defeat the heavily favored Warriors -- and assuming Randall is talking about buying everyone his own jersey, which goes for $99 on NFLshop.com -- the 25-year-old cornerback will be out at least $2,277,000. Of course, there's a good chance Randall will continue to rack up the retweets, especially if the Cavs draw near an upset of the heavily favored Warriors.

For what it's worth, Randall is set to make about $1.5 million with the Browns next season.

Game 1 of the 2018 NBA Finals will begin Thursday night in Oakland on ABC15.