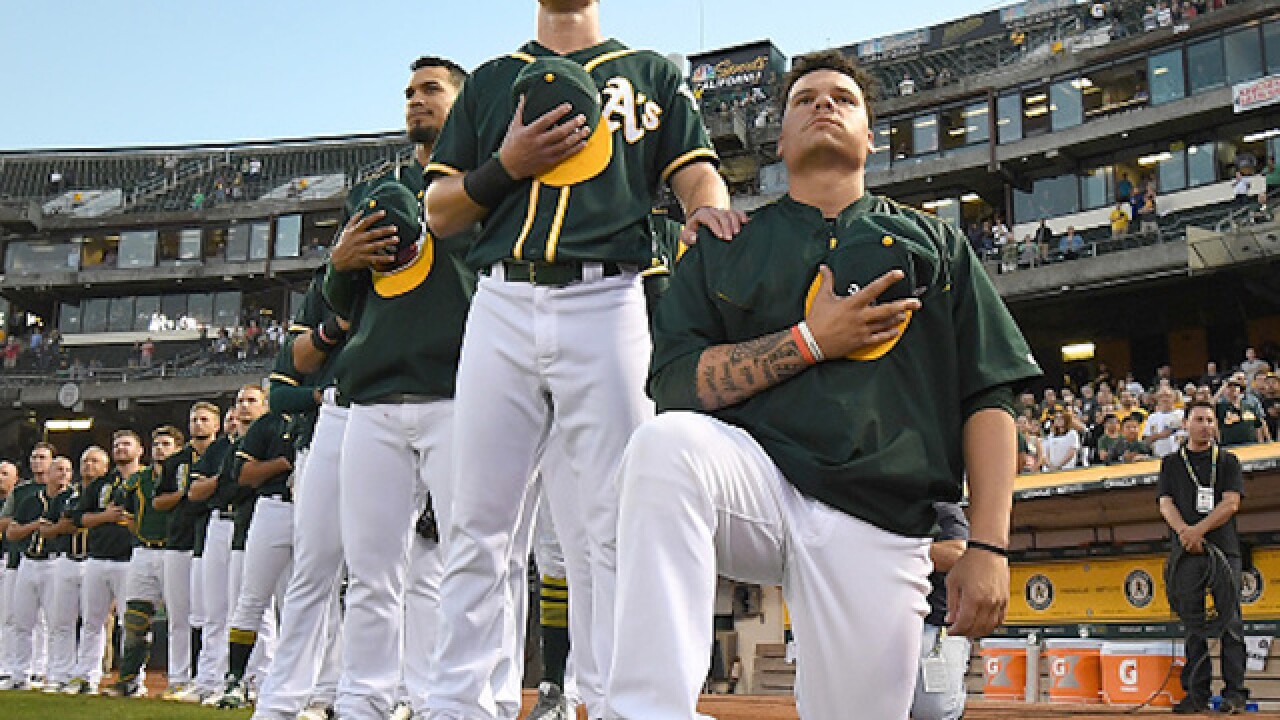 Image copyright 2018 Getty Images. All rights reserved. This material may not be published, broadcast, rewritten, or redistributed.
Thearon W. Henderson
<p>OAKLAND, CA - SEPTEMBER 26: Bruce Maxwell #13 of the Oakland Athletics kneels in protest next to teammate Mark Canha #20 duing the singing of the National Anthem prior to the start of the game against the Seattle Mariners at Oakland Alameda Coliseum on September 26, 2017 in Oakland, California. (Photo by Thearon W. Henderson/Getty Images)</p>

Oakland Athletics catcher and Scottsdale resident Bruce Maxwell, who was believed to be the first baseball player to kneel during the national anthem in protest, says he will stand for the anthem this upcoming season.

Maxwell released a statement on Tuesday, the same day that A's pitchers and catchers reported for spring training in Mesa.

"As a member of a military family, I respect the sacrifices of the men and women who served and continue to serve our country. The purpose of the gesture was to raise awareness about social issues affecting our country, and while I'm looking forward to a society that is inclusive, empathetic and a welcoming place, I will not continue the symbolic gesture of taking a knee during our National Anthem this season," the statement read, according to ESPN and SF Gate.

Maxwell took a knee for the anthem on Sept. 21, following in the footsteps of former 49ers QB Colin Kaepernick and other NFL players. Maxwell's protest came one day after President Donald Trump attacked NFL players who took a knee, calling such players a "son of a b****."

In October, Maxwell was arrested at his home near Hayden and Camelback roads in Scottsdale after they received a report that he pointed a gun at a female food delivery driver. Maxwell allegedly exhibited signs and symptoms of alcohol intoxication upon arrest.

Police say a "strong odor of intoxicating liquor" emanated from Maxwell's breath, and he spoke in an elevated voice, used excessive profanities and made anti-police statements.