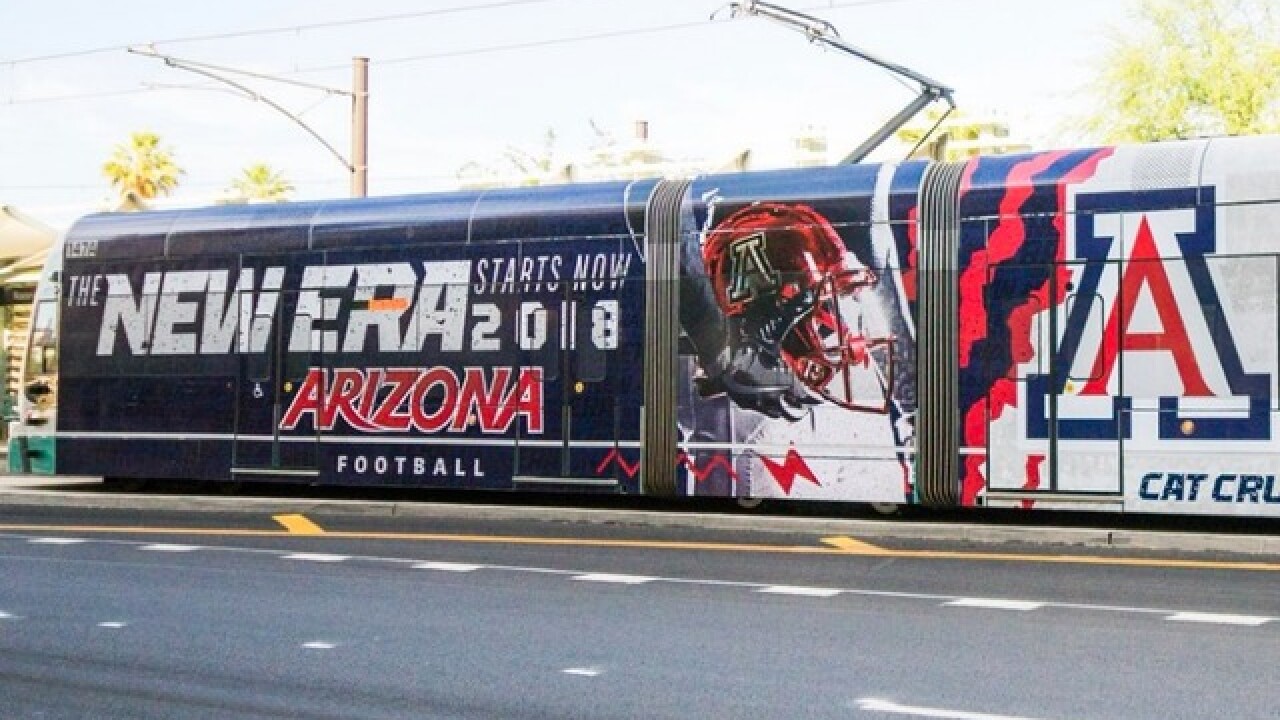 Copyright 2018 Scripps Media, Inc. All rights reserved. This material may not be published, broadcast, rewritten, or redistributed.
<p>(Via @AZAthletics/Twitter)</p>

The Arizona Wildcats have been active, to say the least, in promoting their upcoming football season in the Valley -- including right in their archrivals' backyard.

You can now add a massive advertisement on a Valley Metro Rail train, which happens to run right through ASU, to that list.

On Monday, UA's official athletics Twitter account revealed the following ad on a light-rail train, which is part of a line that runs through Mesa and downtown Phoenix, as well as Tempe.

Ben Chulick, assistant athletic director for marketing at UA, said the ad is currently displayed on just one light-rail train in the Valley. He said the intention of the ad isn't to troll ASU, but to promote the upcoming Wildcat football season to the near-50,000 UA alumni who call Maricopa County home.

"We wanted to try a light rail wrap as a new method to generate exposure, excitement, and hopefully ticket sales/donations for the 2018 Arizona football season. We thought it would be a good time to try with a new coach and tons of excitement for the 'New Era' of Arizona football," Chulick said in an email to ABC15.

"With the amount of alumni living in the Valley, marketing to our fans in the Phoenix area has been and will always be important to us," Chulick said. "I know a lot of people think we are trolling our rivals, but the truth is everything we do is strategically planned to generate exposure and buzz with the ultimate goal of increasing season ticket holders, Wildcat Club members, ticket buyers, KidCats members, Cat Cruiser riders, etc. from the Valley."

Regardless of the ad's intentions, this development hasn't sat well with some ASU fans -- especially after billboards hyping new UA football coach Kevin Sumlin popped up in Phoenix and Tempe in January, and the Wildcats' plans to hold an alumni event at a restaurant in Mill Avenue in May were altered following an outcry from Sun Devil fans.

"We were just looking for a central place to do it," UA athletic director Dave Heeke said about the alumni event, which was relocated to a restaurant in Scottsdale.