3 big takeaways from the Cardinals' loss to the Vikings 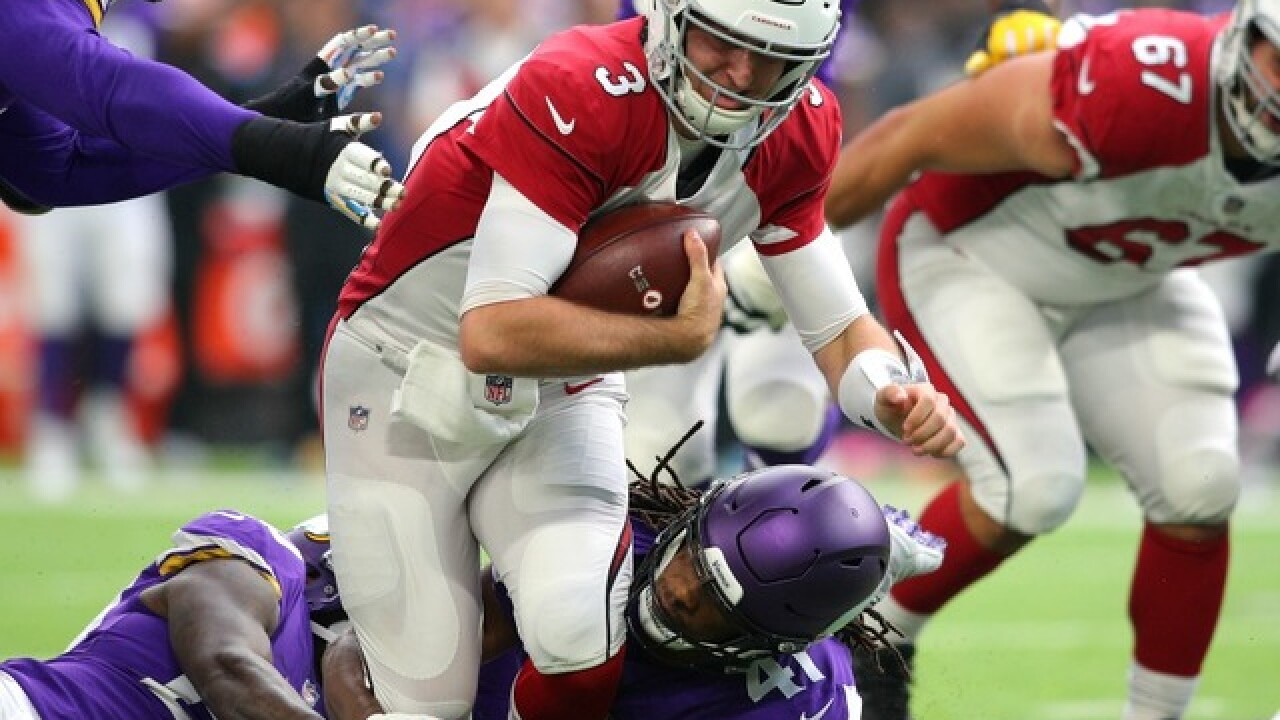 Copyright 2018 Scripps Media, Inc. All rights reserved. This material may not be published, broadcast, rewritten, or redistributed.
Adam Bettcher
<p>Josh Rosen #3 of the Arizona Cardinals is sacked with the ball by Mackensie Alexander #20 and Anthony Harris #41 of the Minnesota Vikings in the second quarter of the game at U.S. Bank Stadium on October 14, 2018 in Minneapolis, Minnesota. (Getty Images)</p>

The Arizona Cardinals made things a bit more competitive than many expected, but they failed to earn their second victory in a row.

Making his third NFL start, rookie quarterback Josh Rosen turned in a decent performance, but veteran QB (and former Cardinals free-agent target) Kirk Cousins and the Vikings were too much for the Cards, as Minnesota rolled to a 27-17 victory at home.

Here are three more takeaways from the Cards' defeat.

Yes, there are plenty of negatives to discuss, but let's take a moment to acknowledge some good things that happened for the Cards on Sunday:

-After winning NFC Defensive Player of the Week honors for his efforts in last weekend's win at the 49ers, defensive end Chandler Jones made more big plays Sunday, including this strip sack of Cousins that led to second-year safety Budda Baker's first touchdown since his high-school days.

-The Cardinals got a decent push against the Vikings' offensive line on occasion, deflecting several Cousins passes at the line of scrimmage and sacking Cousins four times.

-After scoring a touchdown last week, rookie wide receiver and Valley native Christian Kirk had another impressive performance, hauling in six passes for 77 yards, including a 35-yard reception that led to a first-quarter field goal that gave Arizona an early lead. Kirk is the Cards' leader in receptions and receiving yards this season.

-Larry Fitzgerald increased his consecutive-games-with-a-catch streak to 217 games, the second-longest streak in NFL history before Jerry Rice's 274. He also made a big catch in the fourth quarter that led to a short David Johnson touchdown run. He had five catches for 39 yards Sunday.

When he is given time to throw, Rosen has, for the most part, looked good this season. This held true once again Sunday, as the 10th overall pick in the 2018 draft made the most of a difficult situation.

Unfortunately, Rosen often had little time to operate Sunday, thanks in part to an offensive line that suffered several injuries during the game. Starting guards Mike Iupati (back) and Justin Pugh (hand) both exited the game, and backup guard Jeremy Vujnovich (hamstring) left in the fourth quarter with an injury of his own. Rosen was sacked four times Sunday.

For the game, Rosen completed 21 of 31 passes for 240 yards and an interception. It was a respectable showing in adverse conditions on the road, and Cards fans should be encouraged by elements of his performance.

Coming into Sunday's matchup, the Cardinals and Vikings had the two worst rushing offenses in the NFL. But while the Cards continued to struggle on the ground, Minnesota carved up Arizona in the run game, even without its starting tailback.

David Johnson, who came into Sunday's game averaging just 3.3 yards per carry, was once again limited, rushing for just 55 yards on carries (3.1 yards per rush). He failed to score on a fourth-and-goal from the 1-yard line in the first half and he also lost a fumble that led to a Vikings field goal. He did score a fourth-quarter touchdown from a yard out, but it was far too little, too late for Arizona.

Meanwhile, filling in for the injured Dalvin Cook, backup rusher Latavius Murray looked like a star for the Vikings, as he carved up a Cards rushing defense that has been among the league's worst this season, gaining 155 yards and a touchdown on 24 carries. The Vikings rushed for a total of 196 yards Sunday, three times their season average.