3 big takeaways from Arizona's win over Arizona State in Tempe 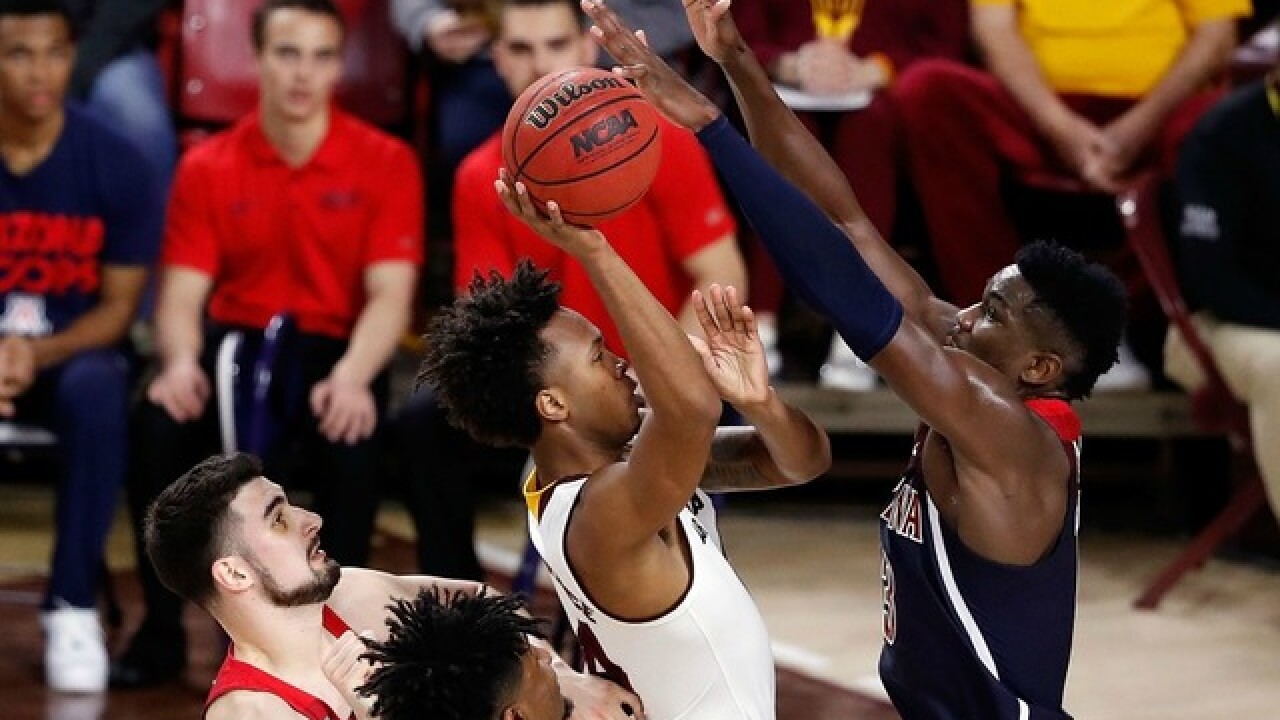 Copyright 2018 Scripps Media, Inc. All rights reserved. This material may not be published, broadcast, rewritten, or redistributed.
Chris Coduto
<p>Kimani Lawrence #14 of the Arizona State Sun Devils shoots over Deandre Ayton #13 of the Arizona Wildcats during the first half of the college basketball game at Wells Fargo Arena on February 15, 2018 in Tempe, Arizona. (Getty Images)</p>

It was as loud and emotionally draining an ASU-UA basketball game in recent memory -- and in the end, the Wildcats once again got the best of their rivals to the north.

No. 17 UA let a 17-point first-half lead slip away but rallied in the second half to earn a 77-70 win over No. 25 ASU in front of a sold-out Wells Fargo Arena. The Wildcats outscored ASU 14-7 in the final four minutes to seal the win, their third straight win in Tempe and their second over ASU this season.

1. Ayton does Devils in again

Simply put, Deandre Ayton is a monster. The 7-foot-1, 250-pound freshman put up 23 points and 19 rebounds in the Wildcats' win over ASU in Tucson on Dec. 30; he followed that up Thursday with 25 points and 16 rebounds, including 14 boards in the second half.

Ayton did exactly what he did to ASU the first time around: Get their big men in foul trouble and score off his teammate's missed shots. Like many teams who have faced him, the Devils just didn't have enough to overcome the man who could be the No. 1 pick in this year's NBA Draft.

2. Two out of three not enough for ASU

The Devils depend on their senior guard trio of Tra Holder, Kodi Justice and Shannon Evans to click in order to win games. Holder and Justice did their part Thursday, scoring a combined 39 points -- but Evans just couldn't find a rhythm on offense.

Evans played some outstanding defense, especially against star UA guard Allonzo Trier. But he came up short on the offensive end, hitting just 2 of 12 shots for five points, his lowest total of the season, and was 1 of 5 from 3-point range. For the game, ASU shot just 28 percent (7 of 25) from beyond the arc, while UA went 6 of 18.

Ayton and the Wildcats got the Sun Devils' big men in foul trouble in the second half, and it led to 19 second-half free-throw attempts. UA made 15 of them, including 7 of 8 in the final minute to seal the deal. Meanwhile, the Devils, who lead the Pac-12 in free-throw attempts, managed just 12 attempts Thursday, and they made just seven of them.

For comparison's sake, Ayton took 12 free throws on his own, and he made nine of them. There's your ballgame in a nutshell.