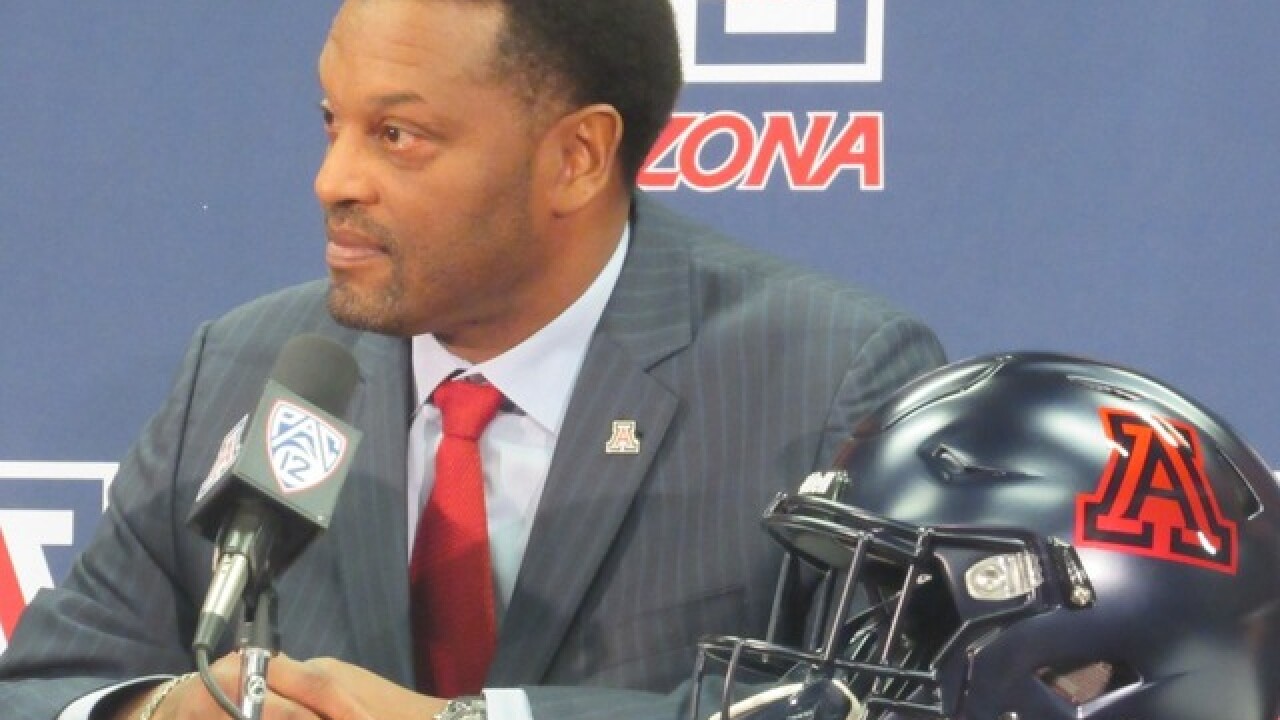 Kevin Sumlin calls the head coaching job at Arizona "the right place and the right challenge."

He made the comment at a news conference introducing him as coach on Tuesday.

Sumlin said that when he spoke with Wildcats athletic director Dave Heeke about the job, talk inevitably turned to the Rose Bowl. Arizona is the only one of the original Pac-10 never to play in the game.

Sumlin was asked whether he had any reservations taking the head football coaching job at a so-called basketball school.

"No. Not for me," he said. "I went to college at what was called a basketball school at Purdue, and we were able to, over the course of time, go to the Rose Bowl, even though people didn't think that would happen.

"Really, that was the conversation with Dave and with the president. They truly want to go to the Rose Bowl, want to win a championship. Everybody wants to do that, but their leadership, their vision really matched mine. They want to be a basketball school, but they also want to be a football school. They want to be an everything school. Our president wants to win at everything. That vision came out during a conversation, and that had a lot to do with why I'm here.”

Sumlin has an 86-43 record in 10 seasons as a head coach with nine bowl appearances. But he found long-term survival in the SEC difficult, losing his job after the Aggies went 7-6 last season, including losing to Wake Forest in the Belk Bowl.

Sumlin also coached four seasons at Houston, going 12-1 in his final year there in 2011. He takes over in Tucson just 13 days after Arizona fired Rich Rodriguez after a notice of claim was filed with the state attorney general's office alleging he ran a hostile workplace.

The claim filed by Rodriguez's former assistant alleged the coach fondled himself in front of her and forced her to cover up an extramarital affair he was having with a different woman. Rodriguez acknowledged the affair, but denied the allegations.

"I think you saw that Kevin's just an open, honest, straightforward person," Heeke said. "We're all in this together. It's a partnership, it's about the people. We look forward to a really long partnership with Kevin and a really open and inclusive environment."

The first question asked of Sumlin was about being the first African-American football coach at Arizona.

"It is significant but this is my third time being a head coach and I've been asked that question every time," he said. "It is significant and shouldn't be overlooked but you hope that in time, in the next 5-10 years, that that is not the first question you get."

With the hiring of Herm Edwards at Arizona State, the football coaches at both of the state's largest schools are African-American.

Sumlin, who already has recruited successfully in Arizona and has strong ties in California and, of course, Texas, promised a program that will be heavily involved in the community.

.@CoachSumlin has excelled at luring top AZ high school players out of state.

As the head coach of @ArizonaFBall, his focus has shifted to keeping those athletes in state. pic.twitter.com/Cz32bsulJX

"We will not be an isolated football program with our players," he said. "It's our job to do our part on the field to create excitement and I'm looking forward to that."

Sumlin met with Arizona's players early Tuesday to offer them reassurance: one, that Yates would be back to run the defense and, two, that the offense would not vary greatly from the one run by Rodriguez. Arizona returns several talented young players, most notably dynamic quarterback Khalil Tate.

"Offensively, we're quite similar in philosophy," Sumlin said, "a little bit different in what we wanted to do maybe throwing the ball a little bit more and getting explosive plays and scoring points."

But not too different from the read option Rodriguez operated.

"I wanted them to leave the building this morning not thinking we're going to run the triple option or we're going to become this crazy team," Sumlin said. "So they left the day feeling good. There will be some subtle changes but hopefully for the better."

Heeke said Sumlin was the only person offered the job.

The university will add more money to pay assistants, Heeke said, one of the subjects of a long conversation he and Sumlin had Saturday night.

"We want to get coaches that Kevin thinks will help lead our program forward and we're ready to invest in that," Heeke said.

Pending approval by the Arizona Board of Regents, Sumlin will get a five-year contract worth $14.5 million.

Despite the speed of the decision, Heeke insisted there was an extensive search and extreme vetting of candidates.

"It felt like a marathon with a sprint pace," he said. "I'm at the finish line and trying to catch my breath a little bit."

Several former players attended the news conference and Sumlin said all are welcome.

"You're always welcome in this program," he said. "This is your program. I've said this wherever I've been. No one knows more or should know more than former players because you guys played here, you guys sacrificed, did a lot of different things. You guys care and it's a different level of caring."