Manny Wilkins has overcome a lot in his life 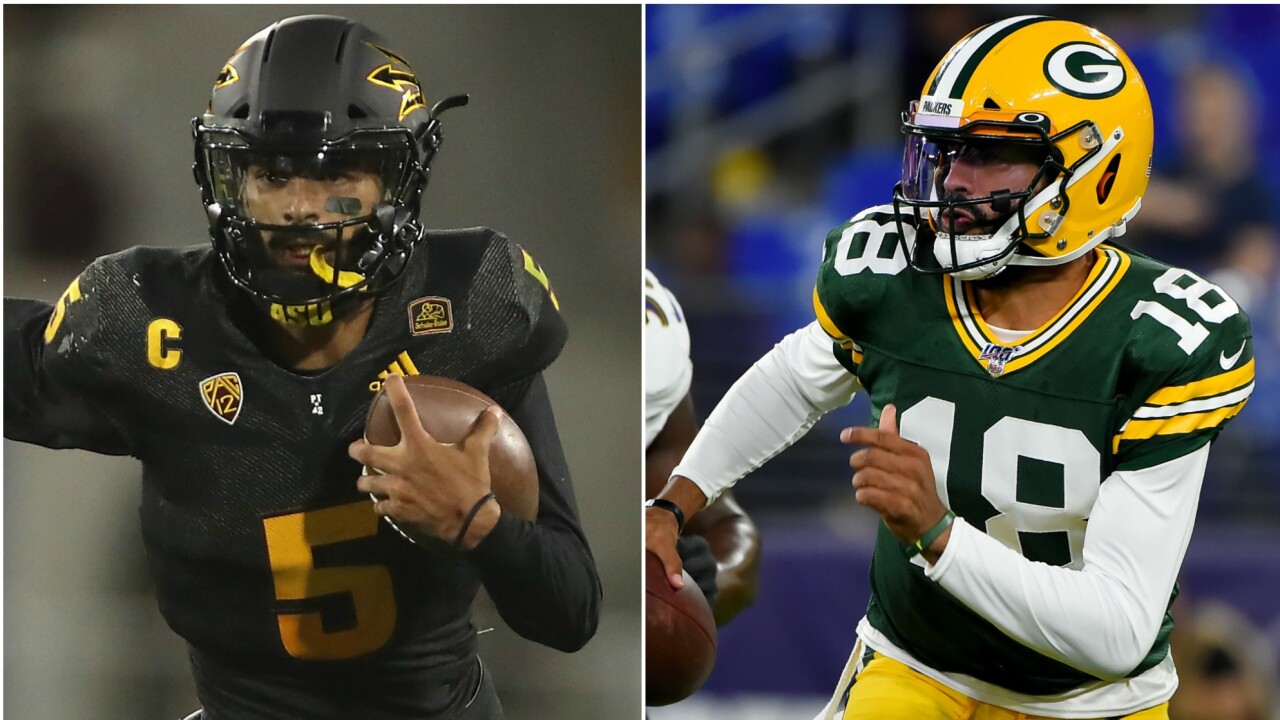 In the fourth quarter of the Green Bay Packers' preseason opener vs. the Houston Texans, Manny Wilkins stepped on the Lambeau Field grass during and led an NFL huddle for the first time.

Some rookie quarterbacks would be overwhelmed by the moment. Anyone familiar with Wilkins' background knows that wasn't the case with him.

"It was definitely a moment that I’ve worked toward for many years growing up. But at the end of the day, it’s just football," Wilkins said during a FaceTime interview with ABC15. "I just tried to go out there with a clear mindset and take it play by play, and when the chance came, go in there and have some fun.

Wilkins has brought the same positive energy to Green Bay that fans and teammates in Tempe came to appreciate during his three years as a starter. Most Sun Devil football fans know his story by now: His father was in prison for a good deal of his childhood before passing away from a drug overdose when he was 10. He and his sister were moved from state to state, never staying in one place for long. He was expelled from a high school in Texas.

But Wilkins' life turned a corner when he accepted that he didn't have to be defined by his circumstances. He used that lesson to become a three-year starting quarterback at ASU, guiding the Sun Devils to back-to-back bowl games, multiple wins over top-10 opponents and consecutive Territorial Cup victories over archrival Arizona. Now, he's looking for a spot on the regular-season roster in Green Bay, home to one of the most stories professional sports franchises in the United States.

"I had a different type of upbringing, so there was a point of my life where I didn’t know what the next step was going to be at some point," he said. "I didn’t know whether I was going to continue to go to school or whatever it may have been. It’s always been a dream, but it’s cool that it’s come to life, definitely.

"The one thing I can control is my attitude, my effort that I put out there, the energy that I bring to this football team. I feel like I have to take it as a job to make sure that I have good vibes and good energy coming to everybody so that it’s a positive work environment."

LEARNING FROM THE BEST

Wilkins was not selected in the 2019 NFL Draft, but the Packers signed him as an undrafted free agent in early May. Green Bay is over 1,800 miles northeast of Tempe -- but when Wilkins joined the Packers, he immediately felt right at home.

"That was the crazy thing about coming to Green Bay — I had 10, 11, maybe 12 guys that I previously had known before I got here, so it was easy to step into the locker room and have some familiar faces," he said. "But I’ve never been somebody who has struggled with being in a locker room and making friends and gaining respect and those types of things. I just carry myself the way I carry myself, I am who I am, and I know it’s not an issue at all."

Rodgers has built a reputation as someone who's difficult to get along with at times -- but Wilkins said those who believe that have it all wrong.

"I think everybody’s perception of him is a little bit different than (what I’ve seen when) I’ve had a chance to be in the room with him," Wilkins said. "(He's) a really laid-back guy. He’s not a look-at-me guy all the time. It’s just Aaron. He’s just out there having fun, messing around with us. Likes to be treated like a regular person.

"He doesn’t have a superstar mindset even though he is a superstar. It’s very humbling to be around him, and his knowledge of the game that he has, it is definitely different."

Wilkins knows he's not at Rodgers' level on the field; very few QBs are. But that doesn't mean he can't absorb as much wisdom from Rodgers as possible, and use that wisdom in Green Bay, or wherever his professional football career takes him.

"It’s elite status, and you just try to take as much as you can from him," he said. "There are some things that he’s out there doing that you’re not going to go out there and try to do, because it’s Aaron and he can do those things. But it’s been awesome to build a relationship with him."

It's been eight months since Wilkins played his final game in a Sun Devil uniform. His favorite moments at ASU include the first time he stepped on the field as a starter, along with wins over No. 5 Washington in 2017 and at USC last season, as well as the Devils' 19-point comeback victory over the Wildcats in Tucson in November.

"I’m a Sun Devil, man," Wilkins said. "I enjoyed it. Every time I stepped on that field, I never took it for granted. That university means the world to me. I stuck it out throughout all the BS that went on there at the beginning, and just being out there to lead that football team for three years was an honor."

THE CUP IS STAYING IN TEMPE!

The Sun Devils mounted an incredible rally and the Wildcats missed a late field goal, giving ASU a 41-40 win in the #TerritorialCup game in Tucson. pic.twitter.com/aEIgFkO0KP

That's not to say Wilkins never thought of transferring to another school -- a thought he said most student-athletes have at some point during their collegiate careers.

"People will lie to you. Unless you’ve been starting since day one, when you’re in college, everybody has the thought at some point that they need to transfer, because that’s just how young kids think when they’re somewhere," he said. "When I was younger and I first got there, and situations were the way that they were, I definitely had the thought in my mind, but never did it come to life that I went and talked to somebody or anything like that. I was rock solid with anything, and I really love the area. I plan on living there in offseasons and everything like that. I’m a big fan of Arizona. It’s cheap living, easy to buy a house there, that type of thing."

And to be clear, transferring never entered Wilkins' mind when six-year ASU head coach Todd Graham was fired and replaced with NFL coach-turned-ESPN personality Herm Edwards as he began his senior season.

"Coach Herm made it as easy as he possibly could," Wilkins said of the transition. "He came in there and he simply was like, 'Listen, I’m not coming in here trying to change everything that you guys know. We want to do things a little bit different, but at the end of the day, this is your guys' football team ... You guys are the leaders of this football team, and we’re going to go where you guys take us.'"

Jayden Daniels is the man who has been selected to replace Wilkins in Tempe. The highly-touted dual-threat quarterback from San Bernardino, California is set to become the first-ever true freshman to open the season as ASU's starting QB.

There are a lot of talent freshman QBs taking the stage this fall but:

Wilkins doesn't think the spotlight will be too big for Daniels, who reminds him of himself in certain respects.

"Jayden’s so much further ahead where he is right now than when I was in his shoes. But I think his demeanor -- there are some similarities in terms of just being cool, calm, collect," he said. "No moment is too big, no moment is too low for you. Everything’s just an even keel."

The most important piece of wisdom Wilkins passed to his successor: Don't try to emulate him, Mike Bercovici, Taylor Kelly or any of the Sun Devils' previous starting quarterbacks.

"I said, you can’t go out there and expect to be me, expect to be Berco, Taylor, whoever was there before. You’re your own quarterback. Don’t let a coach tell you you need to be like this guy. You are who you are," Wilkins said. "You lead the way you lead for a reason, and it’s why you’re there. Be who you are, and when you’re real with the guys around you — it’s not about the coaches. When you’re real with the players, the next step will be taken forward with leadership and things like that.

"He’s going to have a ton of fun, man. He’s going to play really well. He’s a really smooth guy. I think he’s ahead of the game in terms of a cerebral standpoint. He’s a quick learner from what I’ve heard and who I’ve talked to. And the guys in the locker room like him. That’s the one thing that matters, is if you have a team that’s willing to go to war for their quarterback, they have a chance to be special."

When football is over for Wilkins, he has a clear path: music. He estimates he's recorded between 30-40 songs, but nothing he wants to share with the public just yet.

"I have a bunch of friends within the music industry that do pretty well for themselves in terms of what they do and who they are, so being able to be around that for like the past 4-5 years — I’ve always been passionate about music, but it’s taken some further steps over the last few years in terms of how much I truly love it," he said.

"I used to be a big video-game guy, so I figured why not be a little more productive and do something creative, and it’s led me to music, and making music and building relationships off of music and that type of thing. It’s been a lot of fun."

Wilkins also loves building relationships with fans. He took time for some young fans after a loss at December's Las Vegas Bowl, and he's doing the same in Green Bay.

Wilkins has made a young friend out of a Packers fan named Spencer, who he talked to every day during training camp.

"Just talking with him every day — he’s got ASU gear now, he wore an 18 (Wilkins' number with the Packers)," he said. "It was cool to have that moment with somebody and build a relationship with them that is bigger than football."

Wilkins hopes his ability to overcome obstacles in his personal life will continue to resonate with younger people -- but he said the first step to overcome personal circumstances is by making a choice not to be defined by them, just as he did.

"The one thing that I would say I’ve learned over the years is that I can’t want it for somebody if they don’t want it for themselves," he said. "That’s something that has really hit home with me in certain situations, whether it’s family, friends, whatever it may be.

"You can help somebody as much as you can, and my story can help whoever. But if they don’t want it themselves, there’s no forward progress that will happen."