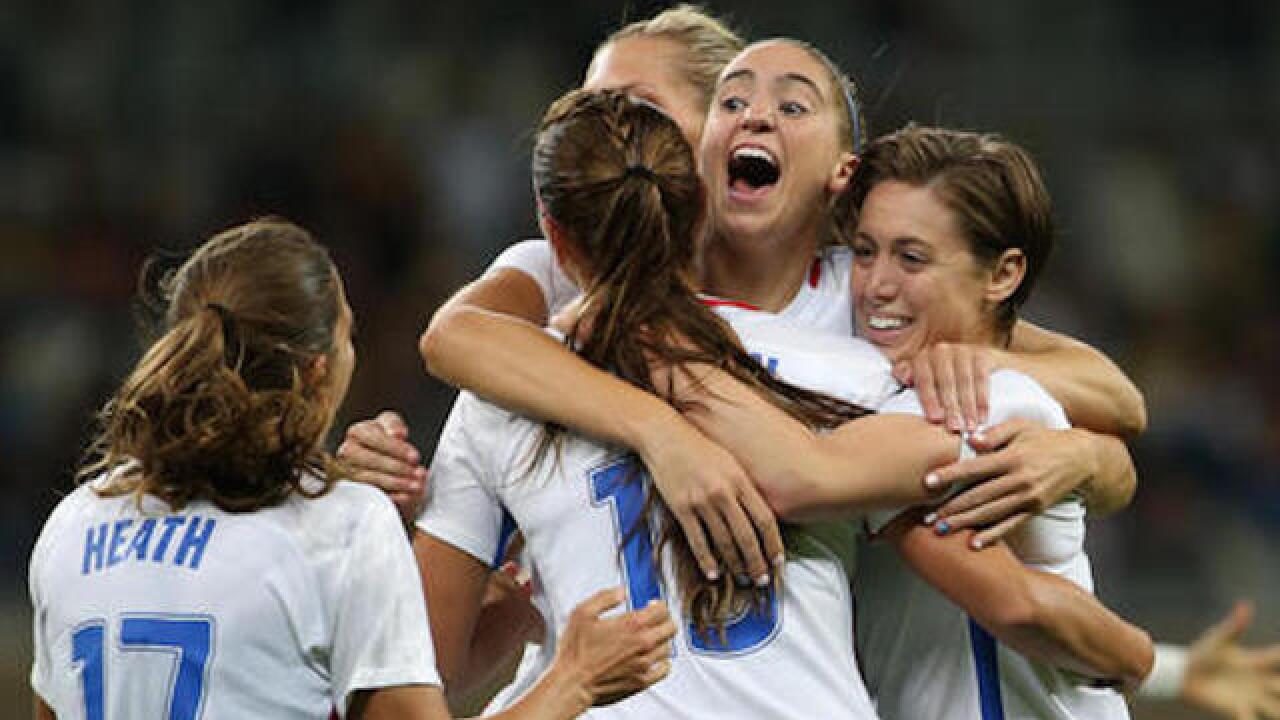 BELO HORIZONTE, Brazil (AP) — Carli Lloyd and Alex Morgan scored a goal in each half as the U.S. women's soccer team defeated New Zealand 2-0 in its debut at the Rio Games on Wednesday, getting off to a solid start in its attempt to win a fourth straight Olympic gold medal.

Lloyd put the Americans ahead with a header in the ninth minute and Morgan added to the lead with a low shot from inside the area less than a minute into the second half at the Mineirao Stadium in Belo Horizonte.

The U.S. dominated from the start to earn the convincing victory and remain unbeaten in 2016, with 14 shutouts and only one draw in 16 games.

Near the end of the game, many of the nearly 10,000 fans at the stadium chanted "Zika, Zika" at goalkeeper Hope Solo, who before coming to the Olympics upset some Brazilians by tweeting a photo of herself wearing a hat with mosquito netting in a reference to the virus. The chants were repeated after the final whistle.

The Americans are trying to become the first team to win the Olympics after succeeding at the World Cup. The Olympic tournament is the first major competition for the U.S. since the retirement of key players such as Abby Wambach and Lauren Holiday following last year's world title in Canada.

The revamped Americans next play France on Saturday, again at the Mineirao.

New Zealand, playing in its third consecutive Olympics, barely threatened the U.S. at the Mineirao, which holds more than 60,000 spectators.

Lloyd opened the scoring after Tobin Heath beat a couple of defenders just outside the area before making a cross to the far post, where the U.S. captain outjumped a defender to head the ball into the other corner and score her seventh Olympic goal. Lloyd has scored in three straight Olympics, including in the finals both in 2008 in Beijing and 2012 in London.

It was the 89th goal in 225 appearances for the midfielder, who is the most-capped player at the Olympic tournament. She has 13 Olympic appearances, tied with Solo for the most on the team.

Morgan scored the second goal with a low shot by the near post after receiving a pass by Morgan Brian inside the area. It was Morgan's 12th goal of the year, and fifth at Olympic tournaments.

The U.S. is trying to win its fifth gold medal since women's soccer became an Olympic sport in 1996 in Atlanta. The only time it didn't win the Olympics was in 2000 in Sydney, when it lost the final to Norway.

The Americans have a fresh team with 11 Olympic newcomers, although many who made it to Rio were in the World Cup-winning squad in Canada last year.

In addition to playing with a younger team, the U.S. arrived in Rio with some players recovering from injuries, including regular starter Megan Rapinoe, who was on the bench the entire match on Wednesday.

Mallory Pugh, 18, started the game to become the youngest American women's player to start in an Olympic match.

The U.S. announced earlier Wednesday that its first two friendlies after the Olympics will be against Thailand on Sept. 15 in Columbus, Ohio, and against the Netherlands on Sept. 18 in Atlanta at the Georgia Dome.