Jelks likes to draw when he's not sacking QBs 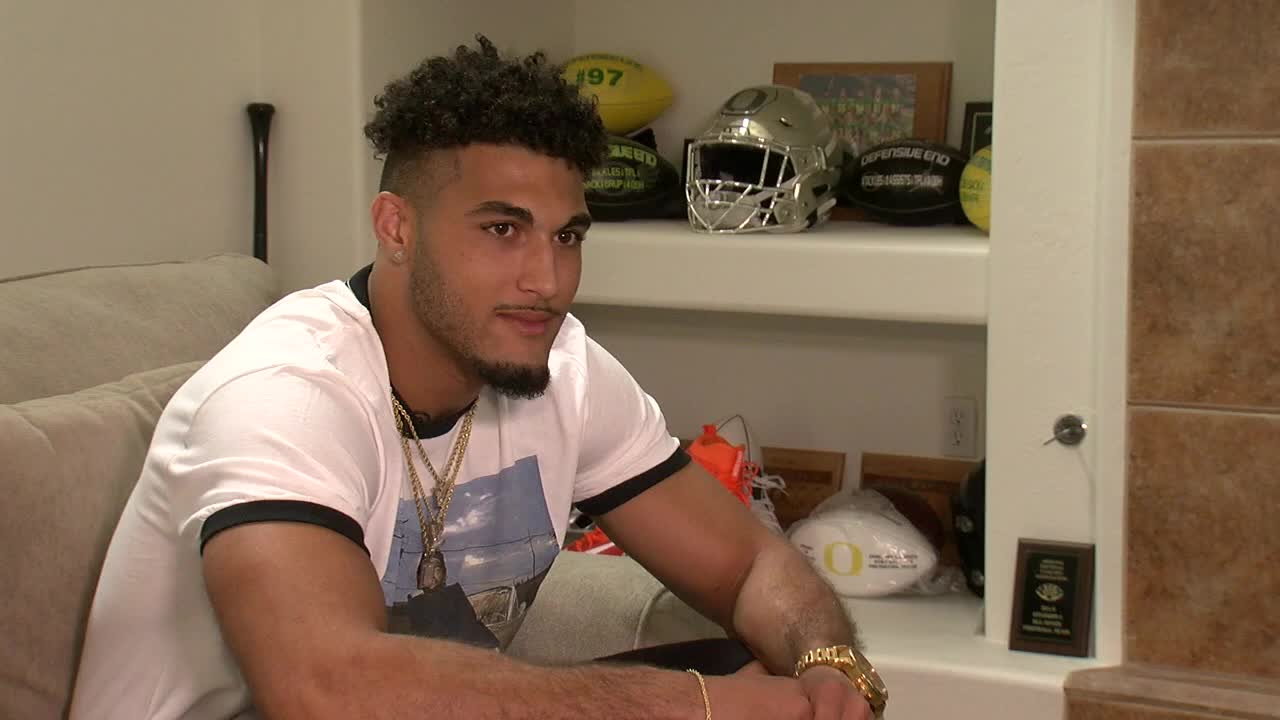 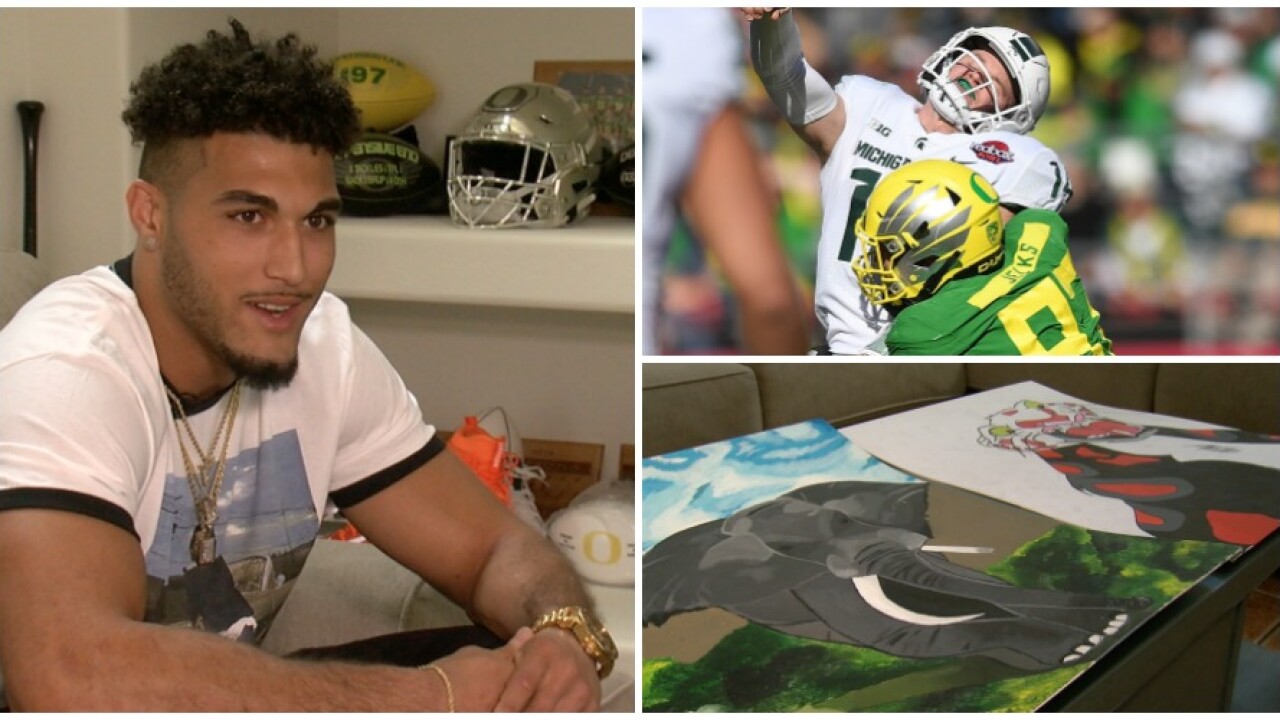 As part of our coverage leading up to the 2019 NFL Draft on ABC15, we're profiling NFL Draft prospects who played high-school football in the Valley.

As he prepared for the NFL Combine in Indianapolis, we caught up with Oregon defensive lineman and Phoenix Desert Vista High School alum Jalen Jelks at his parents' home in Phoenix. Jelks told us about how his growing pains at Desert Vista helped mold him as a football player, persevering at Oregon despite playing for three head coaches in four years, and how his off-field hobbies provide an emotional release.

NFL Draft profile from ESPN draft expert Todd McShay: "Jalen Jelks is an interesting player. At the end of the day, you have a versatile player who can play the edge in a 3-4 or a 4-3 front, and while he's never going to be an elite pass rusher -- he had 10 sacks the last two years, solid production -- I do think he's a player that you can keep every down and eventually has a chance to develop into a starter because he will set the edge, and plays the run hard."

Was playing in the NFL always a goal of yours? It really wasn’t, honestly. I didn’t know what sport I was going to end up playing, so I was kind of bouncing around sports and didn’t really know what position or sport was going to fit with me. I was trying basketball for a while. I did track, did wrestling. I did a couple other sports in high school just to try to feel my body out and figure out what sport was going to be the best for me. Now that football clicked and everything, it’s working out pretty well, obviously.

What do you enjoy most about football? Being able to hit some quarterbacks, probably. That’s one of my favorite things — just being able to get a sack in a game. My first sack, I couldn’t even believe I got it, honestly. It’s just kind of a surreal feeling. You don’t know what to really do. I had all these sack celebrations planned out in my head and stuff, and I got up, and I was like, I’m not going to do any of that. So, that’s probably my favorite thing.

How did your time at Desert Vista prepare you for the NFL? I feel like it was kind of a rough area, just because I didn’t know if I was going to play offensive line or defensive line. Transitioning into college, I didn’t know whether I was going to play left tackle or if I was going to be strictly (defensive) end, or if they were going to make me put on weight and play nose (tackle) or tackle or anything like that, or outside backer. So, just trying to transition now into the NFL, I just told them, 'Hey, I’m just going to try to rush the edge and just try to get to the quarterback.' That’s my easiest job, and that’s what I’m trying to get paid to do.

What was it like playing for three different head coaches at Oregon? I never thought about really transferring or anything like that; I just wanted to stick it out. I have a lot of friends who still play on other teams in college that didn’t want to take that route and decided to opt out and transfer. But I just wanted to tough it out and just prove to a lot of people that once you’re in a family, you’ve got to stay there, and you can just grind it out and make it.

What do you do in your free time? Drawing, painting, fishing — all kinds of stuff. I’m a big outdoors guy, especially out in Oregon. We used to go fishing all the time. I used to skateboard when I was little. I don’t much anymore just because I’m not trying to get hurt. But just being outside -- I was a big kid outside, always trying to run around and just being in the streets, playing football or basketball in the driveway. I love being outside.

What kinds of things do you like to draw? Anything, honestly. I used to just Google stuff and try to copy it. My dad was a big drawer back in the day, so I kind of got it from him. But at the end of the day, it’s just what I want to express. Whether it’s in my notebook just doodling and stuff like that — I have all kinds of sketch books and stuff at home. I just like to free my mind sometimes and get away from the football world, because you’re in it so long and you’re in a different type of book: You’re in a playbook. Just being able to opt out of that and do something you want to do is (a good release).

So, might you have a career as an artist when you're done with football? Who knows? If an opportunity like that came up, obviously I would probably take it. I talked to a lot of people at Nike and stuff like that. One of our friends actually works up there, he’s played with us, and he does product design and stuff like that for them. So, if I got a chance to do that, I would definitely probably do that.

Where do you expect to be selected in the NFL Draft? As high as possible, honestly. I just have to go out and prove to a lot of people and a lot of scouts and a lot of coaches that I can do it, and I can fit in their team and play a key role in it.

What would it mean for you to represent Desert Vista and the state of Arizona in the NFL? Everything. There’s not very many people that get a chance to do it, and (it would be great) if I’m one of those guys that I can come back and contribute to the community myself and show people it’s not that hard; you’ve just got to put in the time and effort, and you can make it out.