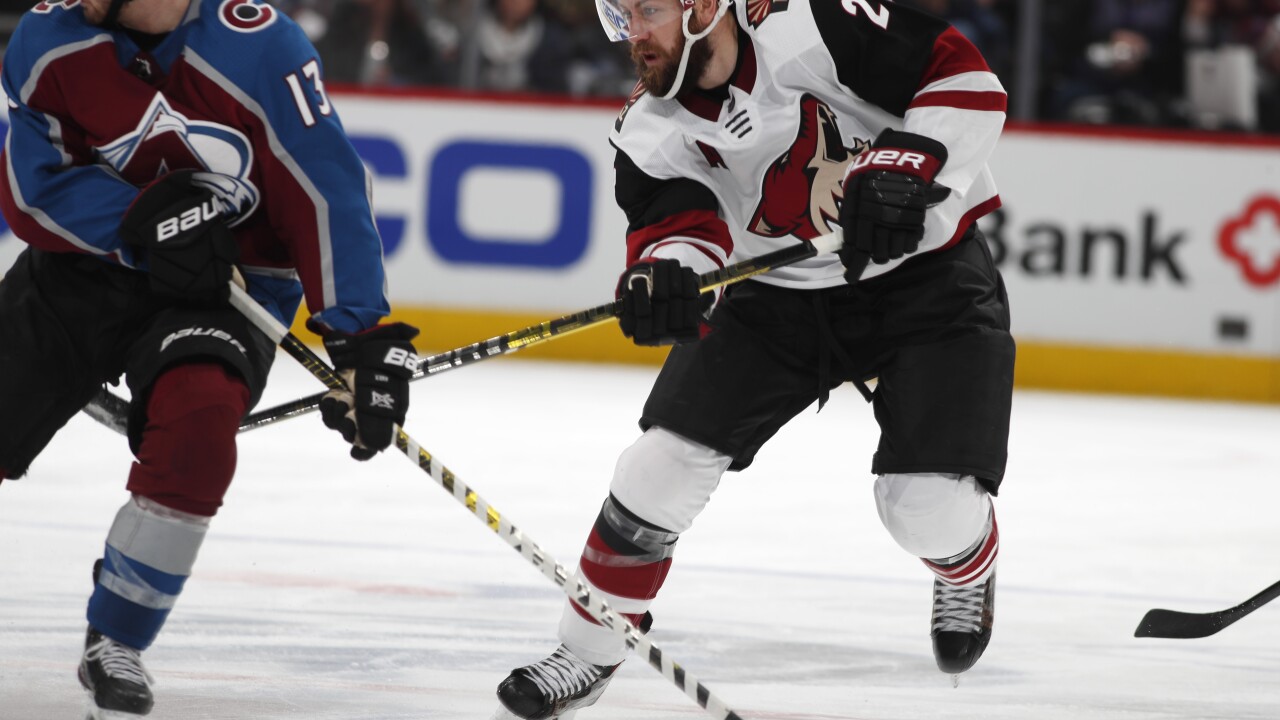 DENVER, CO — Despite giving up a late lead, Colorado still wound up ahead.

Nathan MacKinnon's shootout goal lifted the Avalanche over the Arizona Coyotes 3-2 on Friday night and they tightened their grip on the second Western Conference wild-card berth.

MacKinnon and Derick Brassard also had power-play goals in regulation for Colorado, which extended its lead over Arizona to three points in the race for the wild-card berth. Both teams have four games remaining.

Oliver Ekman-Larsson had both goals for the Coyotes, including the tying goal with 51 seconds remaining in regulation. Neither team could score in the extra period, leading to the shootout.

"That was a bit frustrating to give them a point, but I mean, we got two points and that's the biggest thing," Colorado's Tyson Barrie said. "That kind of, again, puts us in control of our own destiny."

The Avalanche also got 42 saves from Philipp Grubauer, who also stopped all three shots by Arizona in the shootout. Colorado has won six of its last seven games, including the past four at home.

"It was a little bit closer than we wanted it to be," Grubauer said. "We need to stay on the gas a little bit in the last period. It's quite a bit loud in here going into the last period with a lead and giving up a lot of shots. But on the other side, we're doing a great job defending, too. A little bit more interesting than we needed it to be, but it was good. Huge two points."

Arizona's loss clinched Western Conference playoff spots for both St. Louis and Vegas -- both of whom lost Friday night, but still were able to celebrate postseason berths.

Trailing 2-0, Arizona got on the board with eight minutes remaining when Ekman-Larsson scored on a slap shot from the left point that beat Grubauer.

The Coyotes tied it with 51 seconds remaining in regulation on Ekman-Larsson's second goal of the night, a wrist shot from inside the left circle.

"We said that we have to keep working hard and that's all we can do and maybe we'll get back in the game," Ekman-Larsson said. "That's what we did, and I think that could be a huge point at the end of the day, so we'll take that one and move forward and hopefully get in the playoffs, but it's going to be a little bit harder now."

The teams battled through a scoreless first period before the Avalanche broke through for a score while on the power play at 13:37 of the second. Gabriel Landeskog, playing for the first time since suffering a shoulder injury in early March, shot a pass across the crease to MacKinnon, who knocked the puck past Darcy Kuemper, squeezing it under the goalie's stick.

It was the fourth game in a row in which the Avalanche scored a power-play goal.

Colorado made it 2-0 with 4 seconds left in the second period on another power-play score. Kuemper rebuffed a series of shots by the Avalanche, but Brassard got hold of a loose puck between the circles and fired it back into the net for his 14th goal of the season.