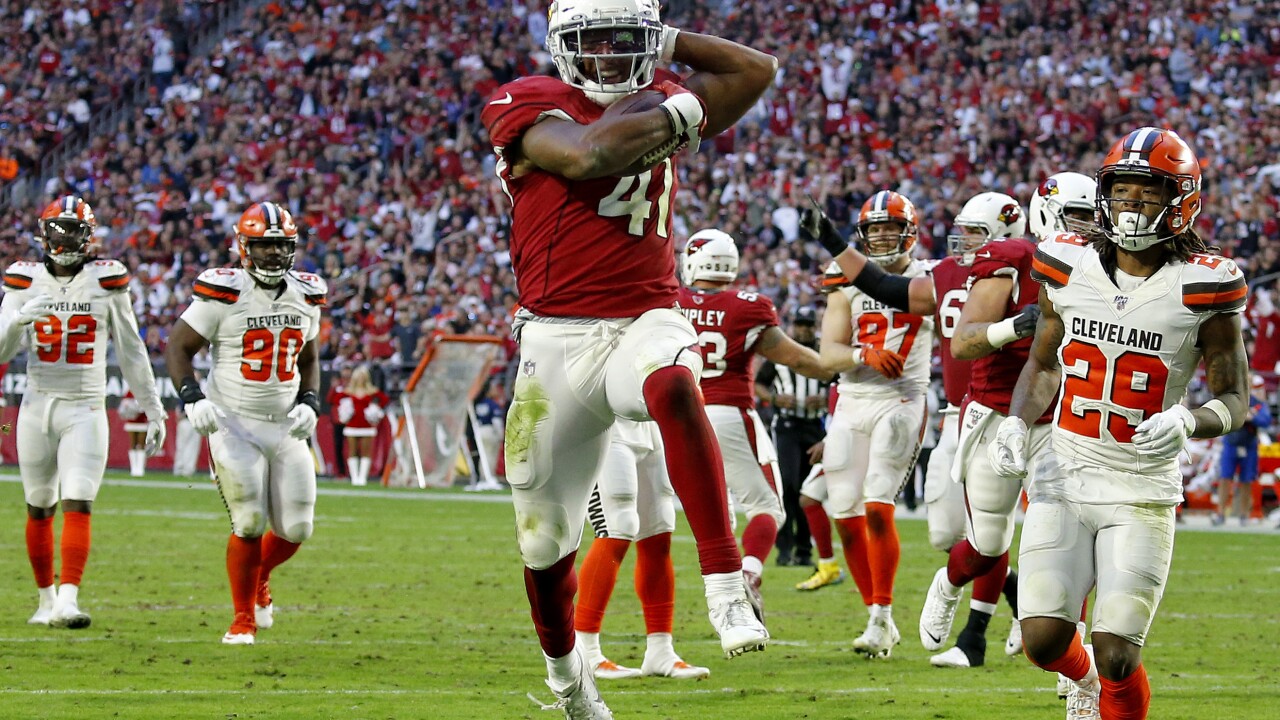 Ross D. Franklin/AP
Arizona Cardinals running back Kenyan Drake (41) runs for his fourth touchdown of the game during the second half of an NFL football game against the Cleveland Browns, Sunday, Dec. 15, 2019, in Glendale, Ariz. (AP Photo/Ross D. Franklin)

GLENDALE, AZ — Kenyan Drake ran for four touchdowns, Kyler Murray threw for 219 yards and a score and the Arizona Cardinals snapped a six-game losing streak by beating the Cleveland Browns 38-24 on Sunday.

Murray got the best of a much-anticipated showdown with Cleveland quarterback Baker Mayfield. The two were teammates in college at Oklahoma and both won Heisman Trophies before being selected with the No. 1 overall picks by their respective teams in back-to-back years.

Murray completed 19 of 25 passes and also ran for 58 yards. Drake, acquired mid-season in a trade with the Dolphins, ran for a season-high 137 yards and scored a touchdown in every quarter. He's the first Cardinals player to score four rushing touchdowns in a game since 1993.

Arizona pushed ahead 28-17 late in the third quarter when Drake scored his third touchdown on a 1-yard run, one play after the Cardinals won a pivotal challenge. Cleveland's Damarious Randall was called for defensive pass interference after a review, reversing the no-call on the field, which put the ball at the 1.

Cleveland's Austin Seibert missed a 45-yard field goal wide left early in the fourth quarter that allowed Arizona to keep its 28-17 advantage. On the ensuing drive, Drake scored his fourth touchdown of the day on a 17-yard run to put the game out of reach.

Cleveland's Nick Chubb -- who came in as the NFL's leading rusher -- finished with 127 yards on the ground. Mayfield completed 30 of 43 passes for 247 yards, two touchdowns and one interception.

Arizona pushed its lead 21-10 just before halftime when Murray hit Dan Arnold in the back corner of the end zone for a 6-yard score. The Cardinals had 299 total yards in the first half, including 145 on the ground.

They started the game with an impressive 10-play, 90-yard touchdown drive, slicing through Cleveland's defense with the combination of Kenyan Drake's runs and Larry Fitzgerald's catches. Arizona scored on a 5-yard run by Drake, who caught the Browns' defense off guard after catching an option pitch from Murray.

Drake scored again on a 1-yard run to give Arizona a 14-0 lead early in the second quarter.

Cleveland scored its only first-half touchdown when Chubb ran for a bruising 33-yard score, shaking several would-be tacklers on his way to the end zone.

Cardinals cornerback Patrick Peterson grabbed his 25th career interception in the first quarter, saving a potential touchdown when he leaped and grabbed Mayfield's pass in the end zone. It was the second interception of the season for the veteran, who missed the season's first six games after being suspended for violating the league's drug policy.

Cardinals: Arizona won despite being banged up at linebacker. Haason Reddick (groin) and Tanner Vallejo (ribs) both got hurt during the second half and didn't return.

Browns: return home to face the Ravens on Sunday.

Cardinals: travel to face the Seahawks on Sunday.