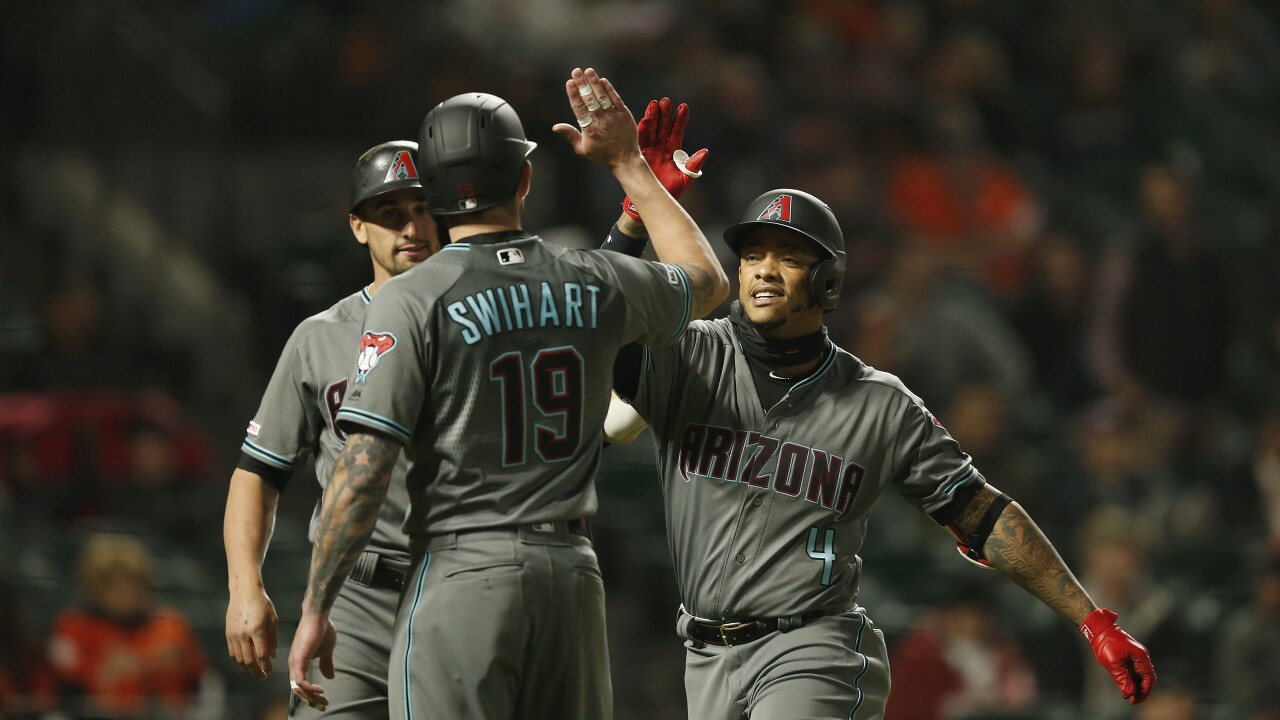 Lachlan Cunningham/Getty Images
Ketel Marte #4 of the Arizona Diamondbacks celebrates with Blake Swihart #19 and Tim Locastro #16 after hitting a three-run home run in the top of the seventh inning against the San Francisco Giants at Oracle Park on May 24, 2019 in San Francisco, California. (Getty Images)

Ildemaro Vargas had five hits and a home run, Adam Jones added four hits and a homer, and the Arizona Diamondbacks broke out of a slump in a big way, beating the San Francisco Giants 18-2 on Friday night.

The D-backs' 18 runs set a new team record for most runs scored in a road game. The previous record was 17, accomplished on three occasions. It's also the most runs the Giants have allowed at Oracle Park since moving there in 2000.

The D-backs had six straight multi-run innings Friday night, the first time an MLB team accomplished that feat since the very same D-backs on July 7, 2000. The only other team to do so in the divisional era (since 1969) was the Texas Rangers on June 17, 1993.

Fun fact: Until tonight the #Dbacks had never scored 18 runs in a road game. pic.twitter.com/vTEx8olY3U

Arizona had been held to 12 runs during a five-game losing streak before unleashing their bats on Drew Pomeranz (1-5) and an overmatched Giants bullpen.

Robbie Ray (4-1) was the beneficiary of the big offensive night, allowing two runs in 5 1/3 innings to win his fourth straight decision. Ray even got into the act on the offensive side with a two-run single in the third inning for his first hit of the year.

Ray had plenty of help. Vargas homered in the first inning and the Diamondbacks turned it into a laugher against reliever Nick Vincent with three-run homers by Jones in the fifth and Eduardo Escobar in the sixth inning.

Ketel Marte added a three-run homer off Derek Holland in the seventh, prompting cheers of “Let Pablo Pitch!” from the few fans remaining who were hoping that Giants infielder Pablo Sandoval could get his second appearance on the mound this season.

Every member of the Diamondbacks’ starting lineup either scored or drove in a run in Arizona’s highest-scoring game of the season.

Tyler Austin hit a two-run homer in the first inning for San Francisco, his third straight game with a home run. The Giants managed nothing else against Ray and fell to 1-4 on the homestand.

Zack Godley pitched three innings for his second save.

Pomeranz had another rough outing against an NL West opponent, allowing the solo homer to Vargas in the first, RBI singles to Marte and Vargas in the second and then the two-run single to Ray in the third that ended his night. Pomeranz allowed five runs and eight hits in 2 2/3 innings, falling to 4-18 with a 5.34 ERA in his career against NL West teams.

Diamondbacks: LF David Peralta was placed on the IL with an injured right shoulder. 1B Kevin Cron and OF Tim Locastro were called up from Triple-A Reno. Arizona had an open spot on the 25-man roster after sending pitcher Jimmie Sherfy down to the minors.

Giants: SS Brandon Crawford missed his second straight game with pink eye. ... C Buster Posey was held out of the lineup a day after catching 13 innings.

Locastro was hit by pitches three times in the game. Pomeranz hit him in the third inning, Vincent in the sixth and Holland in the seventh. Locastro has been hit seven times this season in just 29 plate appearances.