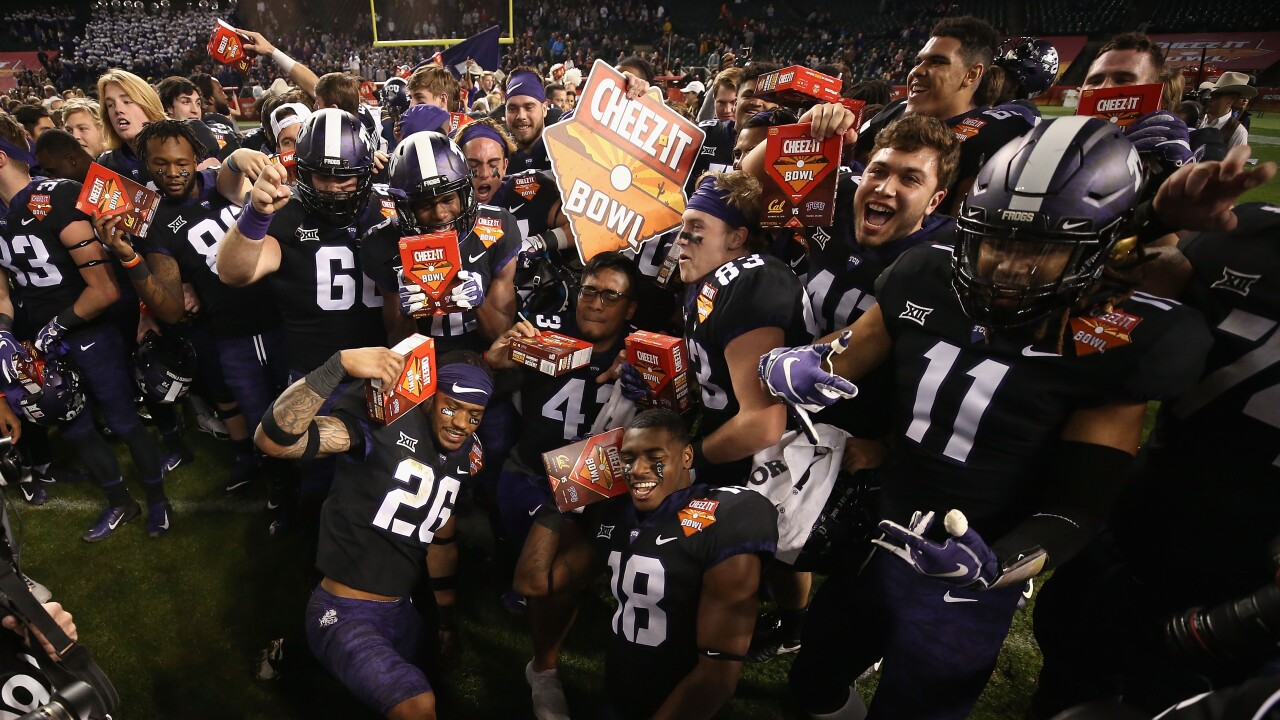 PHOENIX — Jonathan Song kicked a 27-yard field goal in overtime after being replaced for a potential winning kick at the end of regulation, lifting TCU to a wild 10-7 victory over California in the Cheez-It Bowl on Wednesday night.

TCU (7-6) had a chance to win it in regulation, sending out Song for a 44-yard field goal. After Cal (7-6) called a timeout, the Horned Frogs switched kickers and Cole Bunce hooked the kick wide left.

TCU’s Juwuan Johnson intercepted Chase Forrest’s pass to open overtime and nearly returned it for a touchdown. The Horned Frogs were called for sideline interference on the play and had to start their overtime possession at the 40.

TCU worked its way down the field and Song was sent out for the winner. Cal called another timeout, but this time Song stayed out and sent the kick straight through the uprights to end a crazy night in the desert.

The Horned Frogs have won the #CheezItBowl!

The Bears and Horned Frogs combined for nine interceptions — most in the bowl’s 30-year history — including three in five plays of the second quarter. Cal’s Jaylinn Hawkins broke a Cheez-It Bowl record with three interceptions.

Sewo Olonilua ran for 194 yards and a touchdown for the Horned Frogs, who overcome an ugly night by quarterback Grayson Muehlstein. The fifth-year senior threw four interceptions and had 27 yards on 7-of-20 passing.

Cal’s Chase Garbers threw three first-half interceptions before being replaced by Forrest, who had a pass intercepted by TCU’s Vernon Scott in the fourth quarter.

Cheez-Its are for WINNERS! pic.twitter.com/efEqyQb8Iq

The Bears and Horned Frogs earned a trip to the desert behind their defenses.

The game lived up to its defensive billing.

Cal had the first big play after a miscommunication between Muehlstein and Jarrison Stewart. Hawkins intercepted Muehlstein’s pass at TCU’s 34 and Garbers scored two plays later on a 4-yard run.

Five more interceptions followed in the first half — one on a failed TCU trick play — and Cal led 7-0.

TCU left Muehlstein in at quarterback to start the second half despite three first-half interceptions. Hawkins’ picked up his third interception of the game on the opening drive and Muehlstein was replaced by true freshman Justin Rogers.

Cal turned to Forrest in place of Garbers to start the second half, but the senior had a hard time moving the Bears and had an interception.

Olonilua had a 14-yard TD on a fourth-and-2 overturned by a review late in the third quarter. The officials ruled he was stopped short on a 2-yard run the next play, but that was overturned on review, tying it at 7.