Kyle Allen had quite the homecoming 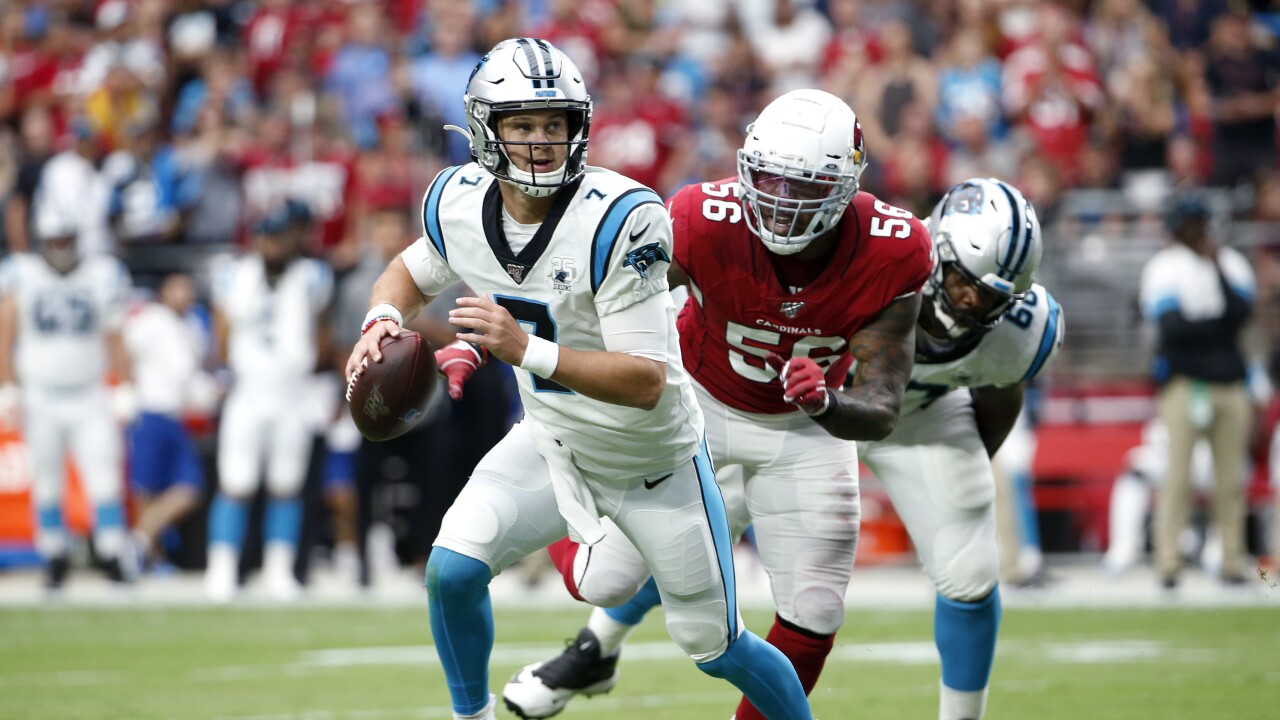 Ralph Freso/Getty Images
Quarterback Kyle Allen #7 of the Carolina Panthers scrambles away from linebacker Terrell Suggs #56 of of the Arizona Cardinals during the first half of the NFL football game at State Farm Stadium on September 22, 2019 in Glendale, Arizona. (Getty Images)

GLENDALE — Valley native Kyle Allen had quite a homecoming, at the Arizona Cardinals' expense.

Filling in for the injured Cam Newton, the Scottsdale native and Desert Mountain High School alum completed 19 of 26 passes for 261 yards and four touchdowns, outdueling his former college teammate Kyler Murray to give the Carolina Panthers a 38-20 win over the Cards at State Farm Stadium.

Allen, who was the Cardinals' High School Player of the Week in 2013, was outstanding throughout the game, making some incredible throws under pressure. Two of his touchdowns were caught by tight end Greg Olsen, as the Cardinals' inability to cover tight ends continued.

Allen tied an NFL record for most touchdown passes in his first two career starts with six. He threw a pair of TDs in a start vs. the New Orleans Saints last year.

The loss dropped the Cardinals to 0-2-1 this season, while the Panthers improved to 1-2.

QB Kyle Allen is ballin’ in the first half!#CARvsAZ

34-year-old @gregolsen88 still getting it done. @KyleAllen_10 throws his 3rd TD of the game! #KeepPounding #CARvsAZ

Murray matched Allen step for step through about 2 1/2 quarters. He led the Cardinals on a touchdown on their first possession of each half, throwing TDs to Larry Fitzgerald and David Johnson. But Murray was ineffective for most of the rest of the game, as he threw a pair of second-half interceptions. For the game, Murray completed 30 of 43 passes for 173 yards and two touchdowns. He rushed eight times for 69 yards and was sacked eight times.

Allen competed with Murray for the starting quarterback job at Texas A&M in 2015 under then-Aggies coach Kevin Sumlin, who's now the head coach at Arizona. Both players transferred from A&M after the season.

Leading 21-20 in the second half, the Panthers struck for two quick scores to essentially put the game away. Christian McCaffrey scored on a 76-yard run late in the third quarter, and Olsen scored his second touchdown of the game early in the fourth quarter following a Murray interception.

Next up for the Cardinals: a home matchup vs. the Seattle Seahawks next Sunday.