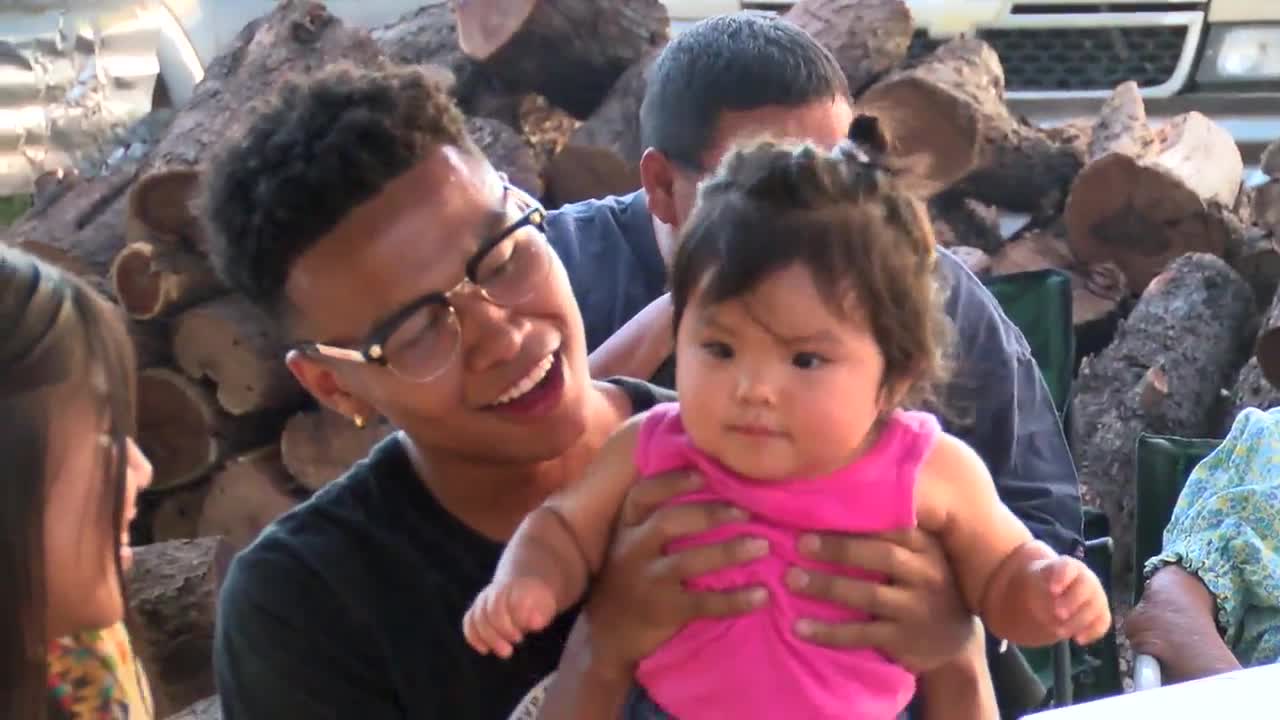 Just four days after he began his journey at Mesa Community College, B.J. Burries made the two-hour drive back home to the San Carlos Apache Indian Reservation.

The occasion: the traditional Sunrise Dance, a four-day coming-of-age ceremony, in honor of his godsister. Joining Burries at the ceremony was his extended family, along with hundreds of San Carlos residents.

It was a perfect illustration of how relations on the reservation have improved for Burries, the state's all-time high-school basketball points leader, and his family. It was a far cry from four years earlier, when Burries began his high-school journey.

"It smoothed over quickly once I signed (with MCC)," he said. "It just feels good starting off new."

Burries' athletic gifts came as a surprise to no one familiar with his family tree. His mother and father, as well as two of his grandparents, played basketball at the high-school level, and his grandparents both won state championships. Burries excelled at multiple sports growing up, including baseball, football and track, as evidenced by the myriad of trophies and plaques in his family's living room in San Carlos.

But basketball is Burries' bread and butter. He grew up playing travel ball with some of the state's other top athletes, including Phoenix Pinnacle High School-turned Arizona Wildcats point guard Nico Mannion.

On Jan. 18, 2019, Burries made state history. His breakaway layup for the Globe Tigers vs. the St. Augustine Wolves at Hayden High School gave him 3,155 career high-school points, surpassing Corey Hawkins, who scored 3,154 points at Goodyear Estrella Foothills from 2006-10.

"At the start of the season, I didn’t really think about (the record) because I didn’t want to jinx myself, so I just kept it smooth and just kept playing," he said. "In that game, everybody started making posts on Facebook … and I just stayed off Facebook the whole day, and I didn’t pay attention to nothing. I was just like, be smooth and just play."

Burries received quite a few congratulatory messages after he made state history -- including a direct Instagram message from Mike Bibby, whom Burries passed to become No. 2 on the state record list before breaking Hawkins' record.

"I was pretty shocked and surprised," Burries said. "He said to keep working and keep going strong."

Burries overcame plenty of adversity in order to make state history. For starters, his team had to play every game during his senior season on the road, as the Globe High School gym was unusable due to water damage. Globe's "home" games took place at Hayden and San Carlos High.

But that was hardly the biggest obstacle in Burries' way.

He his family were subject to a substantial amount of blowback from fellow San Carlos residents, including people his family considered friends. They resented him for choosing to attend Globe High School instead of San Carlos High -- a decision he thought was best for his basketball journey.

"We faced a lot of hate and jealousy," he said, adding that some residents even resorted to witchcraft in order to place a curse on the Burries family.

I would like to thank the San Carlos Jr High staff for having me and letting me talk to the kids about education. i cherish moments like this coming back to the reservation and knowing all these lil kids look up to me is a blessing. all glory to God and blessings to you all.

"Jealousy is everywhere, but it really hits hard when it hits your home with your child," said Kelly Reede, B.J.'s mother. "Sometimes it’s sad because you thought someone was your true friend, but you kind of see how they lashed out, or you see them at a game cheering against him. And I’m like, 'Oh my gosh, that’s our friend. Did you hear what they were saying about him?' It was very hard.

"Raising my children, I always have a forgiving heart. We all go through it. Some are stuck here, never been off the reservation. They don’t want to see good things happen. But we come from a real strong, loving family, and they supported him all the way through."

Burries' stepfather, James Paul Reede, would remind B.J. that those who hate him don't win unless he decides to hate them back.

"We just kind of took that in stride and used it as learning situations, and how to better himself, how to become more resilient, how to be able to overcome and endure those types of hardships, and most importantly to strengthen his faith," he said. "We told him that everything begins and ends with prayer, either within our traditional culture or Christianity. You have to pray before anything you encounter.

Burries' family and tight circle of friends helped him navigate through the ill will he faced on the reservation, and make state history.

"Family means a lot," he said. "They just helped me out a lot, spit real facts to me, (told me) to keep moving forward."

Despite making state history, Burries didn't receive a single offer to play NCAA Division I basketball. Part of the reason, he believes, is that Globe competes in 2A, a lower-level division of Arizona high-school hoops.

"A lot of good players are in 1A, 2A, 3A," he said, "but they get overlooked just because of our competition down here."

So, Burries accepted an offer to play at MCC, where he hopes to gain valuable skills and experience that he can use as a stepping stone to reach the next level. His on-court skills combined with his off-court humility impressed Sam Ballard, who's entering his 12th season as MCC head men's basketball coach and has earned regional Coach of the Year honors at the collegiate and high school levels.

"As we often say to our guys: Being a humble, quiet, nice person outside the lines is a real testament to your upbringing and the kind of person you are," Ballard said. "When they get inside the lines, of course we want them to be more expressive and those kinds of things. But outside the lines, he’s a wonderful young man, speaks very well and is very dedicated to what he wants to do.

"He really wants to prove (himself) to some colleges I guess that he feels might have overlooked him, and make his way through this and show them that he’s actually a good enough basketball player, plus he’s really a good person — the kind of person that just about anyone would want in their program."

Burries' first collegiate game won't come until Nov. 1. In the meantime, he's settled in nicely at MCC. He enjoys his classes and is leaning toward a major in sociology, and he has already formed strong relationships with his new teammates.

But Burries carries a chip on his shoulder every day he comes to practice, using it as motivation to keep improving and catch the eye of a D-I program looking for a sharpshooter with high character.

"This is a big chip," he said. "I'll start hitting the weight room and a lot and start running, and just prove them wrong."

The rift that once existed between the Burries family and the San Carlos community no longer seems to exist, thanks to Burries' on-court accompishments, the media attention he's brought to the reservation, and his off-court commitment to his community.

Ballard can attest to that. He was amazed at the turnout at Burries' college signing ceremony in San Carlos in April.

God is great. I made my own decision and did what was best for me. I’m thankful for the Mesa coaching staff for believing me. im ready to get to work! #AllGloryToGod T-Bird nation! ✍🏽

"Most signings are parents and maybe some school administrators and coaches, and a table. And here they were in an auditorium, and there were a lot of people and a lot of cameras," he said.

"I saw a lot of really great feeling for him. I know up in the San Carlos area, they love basketball, and I can certainly understand the feelings of maybe he should have played here, played there. But at the signing, it was all love, and he was very humble and very approachable."

Just days before his first day of classes at MCC, Burries stopped by San Carlos Middle School to speak to students at an assembly. His message: Keep your grades up, and avoid alcohol, gangs and negative influences.

"Put God first, and your family and education," he said. "And keep your circle small, because there’s a lot of jealousy and hate."

I would like to thank the San Carlos Jr High staff for having me and letting me talk to the kids about education. i cherish moments like this coming back to the reservation and knowing all these lil kids look up to me is a blessing. all glory to God and blessings to you all.

Burries made a lot of young fans during his high-school career, and even developed an entourage of sorts while playing for Globe, as kids would travel with him and the team from game to game.

"There’s been certain times when kids on the basketball court will throw up a 3-point shot and yell 'B.J.' or 'Burries,' wanting to emulate what he has done," his stepfather said. "It's just overwhelming what he’s done, what he represents, who he represents, and the followers that he has."

Burries' two biggest fans are his little sister Kaylee and little brother Tyson. B.J. and Tyson enjoy playing basketball and video games together -- both believe they're the better Fortnite player -- and Kaylee has already made trips to Mesa to visit her big brother.

Burries would like to become a full-time inspirational speaker when his basketball career is over. For now, he's busy making the most of himself on the court and in the classroom in the East Valley.

For Burries, it's important to continue to blaze a path that others on the San Carlos reservation can follow -- even those who may have hated him along the way.

"A lot of people down here, they don’t really get a chance to play after high school. It’s either they start in the workforce or they start drinking," he said. "So, I feel blessed to play, and hopefully go to Division I and then go pro."