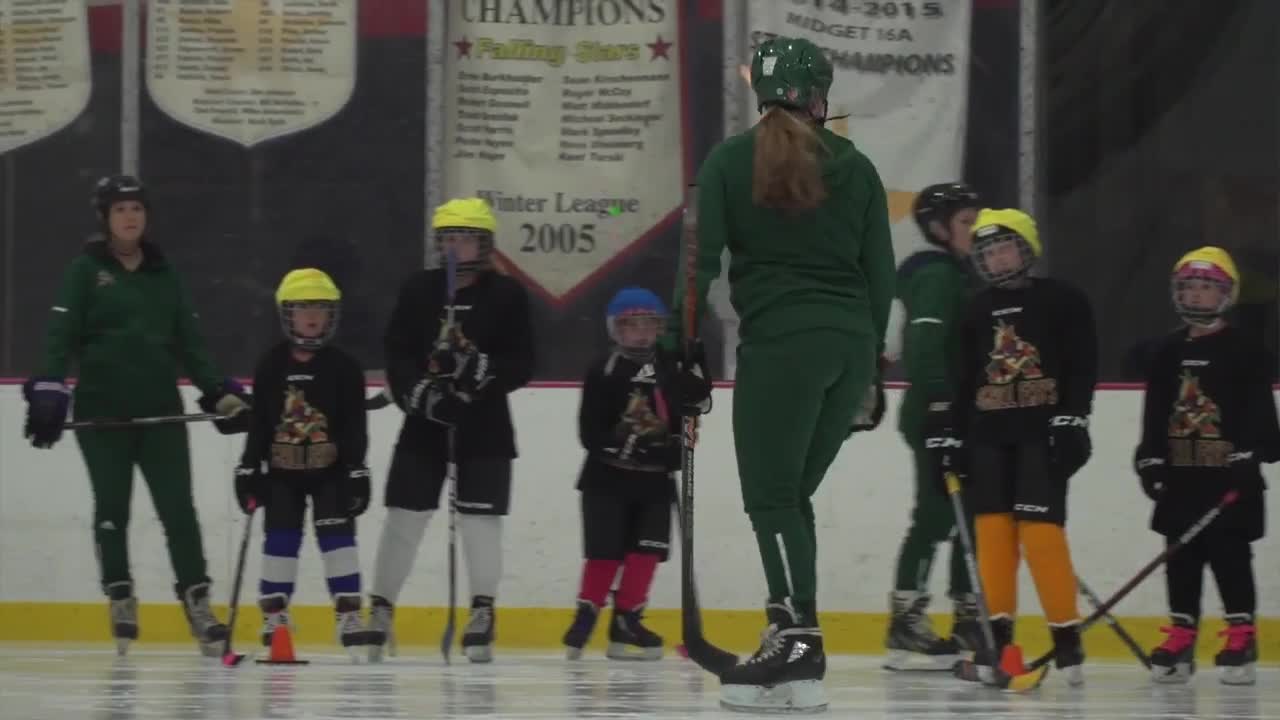 The Arizona Coyotes hope to lead the way in the National Hockey League as the team with the most female leaders in the league. There are four female executives working for the Coyotes: Lyndsey Fry, Marina Carpenter, Olivia Matos and Patty Frankenfield.

PHOENIX — The Arizona Coyotes hope to lead the way in the National Hockey League as the team with the most female leaders in the league.

Lyndsey Fry, the special advisor to the president, is a Chandler native and Olympian who heads up programs for kids, especially girls' hockey.

She said her goal is to encourage the girls on the rink and beyond.

"I think the same applies to the business side of things. If more women can see from any professional male sport that there are more women involved, they're going to believe that they can do that too, which is great," said Fry.

Carpenter, the team's general counsel, said she was proud to be on a team that values talent and inclusion.

"Our leadership here is focused on getting the best of the best, and I think it's fortunate that we ended up with such a diverse group, especially with our female leadership," she said. "I have a young daughter at home too so it's really hit home for me that...our organization is doing the right thing."

President and CEO of the Arizona Coyotes Ahron Cohen said he hopes the Coyotes will influence the rest of the league.

"Our focus is just having great people and we have a team that's outstanding and is passionate about their jobs and making this a great organization," he said. "Really show other teams what it's all about in terms of being progressive and really creating a model franchise."

Here's a little more about these Coyotes leaders:

Marina Carpenter, General Counsel and Chief of Staff of the Arizona Coyotes
Marina Carpenter serves as General Counsel of the Coyotes and the team's AHL affiliate, the Tucson Roadrunners. She is tasked with the day-to-day legal needs of the team, she oversees litigation matters as well as risk assessment and she manages contracts. Carpenter is an Arizona native and played Division-1 volleyball at Arizona State University, where she was named as an academic All American twice and ranks second in school history for career assists. She graduated Summa Cum Laude from ASU's W.P. Carey School of Business. Carpenter attended law school at ASU and was a member of the Sports & Entertainment Law Journal.

Patty Frankenfield, Vice President of People and Culture at the Arizona Coyotes
Patty Frankenfield is entering her fourth season with the Coyotes as Vice President, People and Culture. In her role, Patty is responsible for recruiting, hiring and training all new staff. She also leads the company’s efforts to make the Coyotes one of the best places to work by maintaining a culture that supports employees and managers in their daily work. Frankenfield also oversees all employee benefit programs, including interface with brokers and service providers.

Lyndsey Fry, Hockey Ambassador and Special Advisor to the President and CEO of the Arizona Coyotes
Lyndsey Fry is a Chandler native and a 2014 Olympic women’s hockey silver medalist. Lyndsey heads up two of the Coyotes’ programs for girls – Small Frys (Ages 6-12) and the Kachinas (Ages 10-18). Her objective is to grow the love of hockey in kids and girls in Arizona.

Olivia Matos, Executive Director of Arizona Coyotes Foundation and Director of Community Relations at Arizona Coyotes
Olivia Matos oversees the Arizona Coyotes Foundation and the Community Relations department for the team. She is in her seventh year with the franchise. She also serves on the board of directors for Foundation for Blind Children and Feeding Matters. She joined the organization as the Manager of the Foundation and Community Relations from Recruiting.com/Jobing.com where she worked in Public and Social Services Solutions Sales, managing and developing nationwide clientele within the following industries: government, education, associations, and social service organizations. Prior to Recruiting.com, Matos spent five years at the Arizona Biltmore Resort & Spa where she sold, planned and executed events of all kinds.