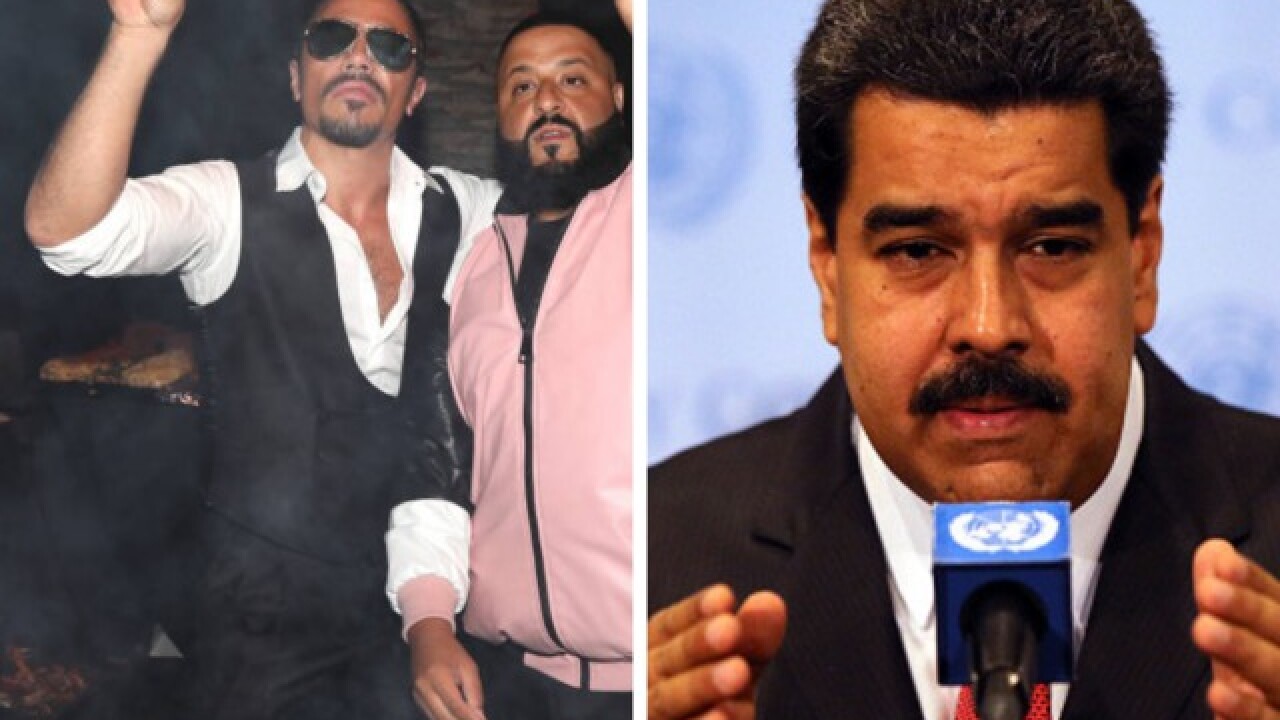 Venezuelan President Nicolás Maduro feasted on pricey steaks and smoked cigars at a "Salt Bae" restaurant in Istanbul on Monday, drawing ire and condemnation back home, where an economy spiraling toward collapse has triggered a food crisis.

Videos posted to Twitter and Instagram by the Turkish celebrity chef Nusret Gökçe, known as Salt Bae for his signature style of seasoning steaks, show Maduro dining with his wife, Cilia Flores, as Gökçe dramatically slices meat at their table while gyrating his hips. Another clip captures Maduro puffing on a cigar as the couple receives T-shirts screen-printed with Gökçe's likeness sprinkling salt.

"This is a once-in-a-lifetime moment," Maduro can be heard saying to fellow diners.

The videos have since been removed.

Maduro's political opposition has seized on the meal as proof of the president's disregard for the country's mounting humanitarian crisis.

"While Venezuelans are suffering and dying of hunger, Nicolas Maduro and Cilia enjoy one of the most expensive restaurants in the world, all at the expense of the money stolen from the Venezuelan people," tweeted Julio Borges, a leading opposition politician who was recently exiled from Venezuela.

Florida Sen. Marco Rubio also weighed in on Twitter, condemning the spectacle: "I don't know who this weirdo #Saltbae is, but the guy he is so proud to host is not the President of #Venezuela. He is actually the overweight dictator of a nation where 30% of the people eat only once a day & infants are suffering from malnutrition."

Rubio was criticized for sharing the phone number of the Nusr-et Steakhouse Miami branch in a subsequent tweet , and encouraging his 3.6 million followers to call.

A university study published in February found that 87% of Venezuelans are currently living in poverty. Rampant inflation and higher food prices mean many people are skipping meals -- a phenomenon known as the "Maduro diet" for the embattled president, who has said that doing without "makes you tough."

According to the survey, 72.7% of respondents said they lost weight in the past year, dropping an average of 19 pounds (8.7 kg). The average weight loss was slightly higher among those living in extreme poverty.

The number of respondents who reported eating two or fewer meals per day nearly tripled from the previous year's survey, rising from 11.3% in 2015 to 32.5% in 2016. Based on the data, the authors of the study estimate that some 9.6 million Venezuelans eat two or fewer daily meals.

Speaking on Venezuelan state television Monday night, Maduro said that he stopped off at the restaurant on his way back to Venezuela from China, where he was hoping to secure financing for the cash-strapped country.