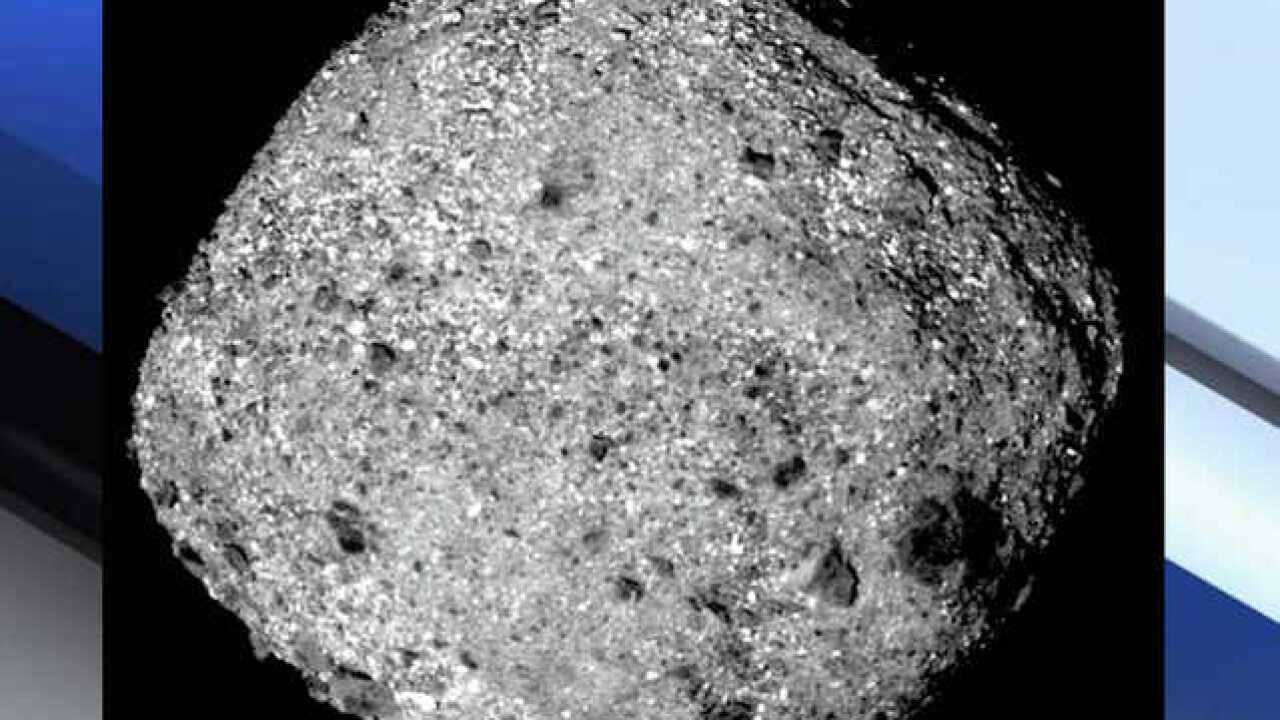 Copyright 2018 Scripps Media, Inc. All rights reserved. This material may not be published, broadcast, rewritten, or redistributed.
NASA

After a two-year chase, a NASA spacecraft arrived Monday at the ancient asteroid Bennu, its first visitor in billions of years.

The robotic explorer Osiris-Rex, right on cue, pulled within 12 miles (19 kilometers) of the diamond-shaped space rock. It will get even closer in the days ahead and actually go into orbit around Bennu on Dec. 31. No spacecraft has ever orbited such a small cosmic body.

Flight controllers applauded and exchanged high-fives once confirmation came through -- exactly one week after NASA landed a spacecraft on Mars.

With Bennu more than 80 million miles away, it took seven minutes for word to get from the spacecraft to flight controllers at Lockheed Martin in Littleton, Colorado. The company built the spacecraft there.

Bennu is estimated to just over 1,600 feet across. Researchers will provide a more precise description at a scientific meeting next Monday in Washington.

About the size of an SUV, the spacecraft will shadow the asteroid for a year, before scooping up some gravel for return to Earth in 2023.

Scientists are eager to study material from a carbon-rich asteroid like dark Bennu, which could hold evidence dating back to the beginning of our solar system 4.5 billion years ago. As such, it's an astronomical time capsule.

A Japanese spacecraft, meanwhile, has been hanging out at another near-Earth asteroid since June, also for samples. It is Japan's second asteroid mission. This latest rock is named Ryugu and about double the size of Bennu.

Ryugu's specks should be here by December 2020, but will be far less than Osiris-Rex's promised booty.

Osiris-Rex aims to collect at least 60 grams, or 2 ounces, of dust and gravel from Bennu. The spacecraft won't land, but rather use a 10-foot mechanical arm in 2020 to momentarily touch down and vacuum up particles. The sample container would break loose and head toward Earth in 2021.

The collection -- parachuting down to Utah -- would represent the biggest cosmic haul since the Apollo astronauts hand-delivered moon rocks to Earth in the late 1960s and early 1970s.

NASA has brought back comet dust and solar wind particles before, but never asteroid samples.  Japan managed to return some tiny particles from its first asteroid mission.

Both Bennu and Ryugu are considered potentially hazardous asteroids. That means they could smack Earth years from now. At worst, Bennu would carve out a crater during a projected close call 150 years from now.

Scientists contend the more they learn about asteroids, the better equipped Earth will be in heading off a truly catastrophic strike.

The $800 million Osiris-Rex mission began with a 2016 launch from Cape Canaveral, Florida.