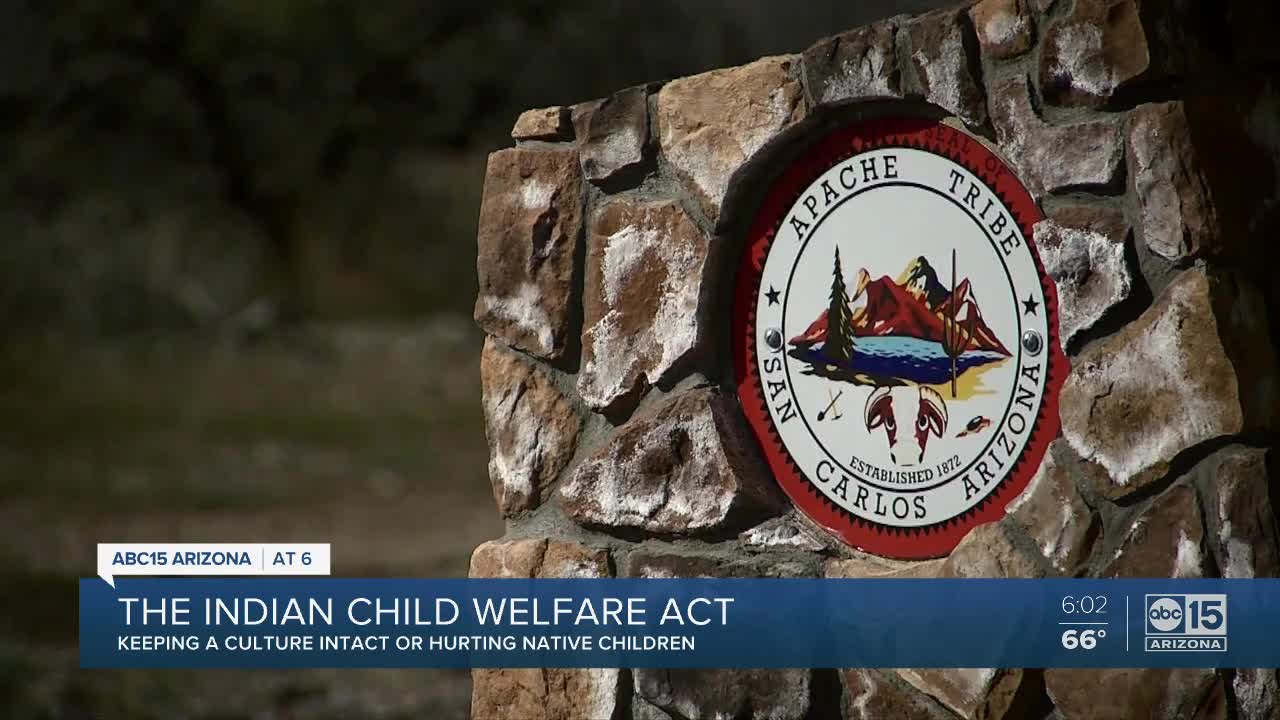 The San Carlos Apache Indian Reservation is an all expansive landscape of desert floor, towering mountains and mesas. It encompasses three counties; Pinal, Gila and Graham.

"As Apaches they tell you when the child's umbilical chord falls off, it's buried here so you will always come home," said Sherrie Harris, a member of the San Carlos tribe. She was adopted. Her father from San Carlos, her mother a Yavapai from the Ft. McDowell Reservation.

Harris is a lawyer by training. She grew up in a multi-generational family.

"My grandparents instilled in me this is home," she said, "whether you go off and get an education, whatever you choose to do professionally you come back and help your people out."

Harris believes the Indian Child Welfare Act is critical to maintaining the Native American culture and their way of life.

"It's protection after years of taking Indian children from our homeland and placing them outside in efforts to save the man but kill the Indian," Harris said.

The legality of ICWA, as the Act, is now being challenged. It was created in the 1970's to protect the best interests of Native American children as well as promote the stability and security of tribes and families.

Texas, Indiana and Louisiana filed suit claiming the law was unconstitutional because it treated Indian children differently than every other American child. In 2018 a federal judge in Texas agreed. The case was appealed and in 2019 to the 5 Circuit Court of Appeals in New Orleans. The 5th Circuit overturned the decision. It later decided to hear the case again before the full 5th Circuit on January 22.

Timothy Sandefur from the Goldwater Institute wrote a friend-of-the-court brief supporting the abolishment of ICWA.

"The federal constitution prohibits the federal government from categorizing people on the basis of race, bio ancestry, national origin. Those sorts of things," he said.

"Native American children are at greater risk of everything from abuse and neglect to alcoholism and suicide than children of any other demographic," Sandefur said.

He points to the 2018 case Donielle King, a member of an Arizona tribe. She was arrested for killing her year old son. Arizona's Department of Child Services investigated King on 6 separate occasions for abuse of her children. But she fell under the Indian Child Welfare Act which has a higher burden of proof before intervening.

"It's a disgrace to think," Sandefur said. "That there are parents out there who are willing to step in and help these children and federal law says no because their skin is the wrong color."

D-C-S SAYS it doesn't find the law burdensome and the agency works closely with the tribes to have a child placed with other family members, or a family from the same tribe or another tribe. The ultimate goal D-C-S says is to re-unite the child with his or her parents.

Sherrie Harris said, no matter how well intended people might be, allowing native children to be adopted out to non-native families is wrong.

"I know from having worked in the tribal justice system, foster families are hard to come by," Harris said. "But taking the position, because you are privileged and because you think you know what's best, you can care for the child. When really it's important for native children to have ties to their community."

The 5 Circuit is not expected to rule until later this year. Whatever the decision, the losing side is expected to appeal the case to the U.S. Supreme Court.