Student activists have planned a march in Phoenix Saturday calling for gun reform and increased attention on school safety. Saturday's march is one of hundreds planned across the U.S.

The student activists are continuing to call on Governor Doug Ducey to meet with them, even offering him a speaker's slot at the rally.

The teens, who held a sit-in at Ducey's office last week, accused him at a news conference Wednesday at the state Capitol of dodging their attempts to have a dialogue.

They also reiterated their beliefs that his school safety proposals do not go far enough.

The youths say the plan does not incorporate measures such as universal background checks at every point of a gun sale or a ban on bump stocks.

Thousands are expected at the march at the state Capitol.

The organizers are advising participants not to engage with counter-protesters.

RELATED: Find a March for Our Lives march near you

The students say they want to meet with the governor about legislation that would ensure background checks for all gun sales, ban bump stocks and keep firearms away from the mentally ill.

Organizers say people that want to participate should arrive at the Arizona State Capitol no later that 9 a.m. and meet at the Wesley Bolin Plaza. Several speakers are expected to begin around 10 a.m. with the march beginning at 11 a.m.

The march will begin at Wesley Bolin Memorial Plaza, which is located immediately east and across the street from the Capitol. The exact route after that will not be released until the rally begins. 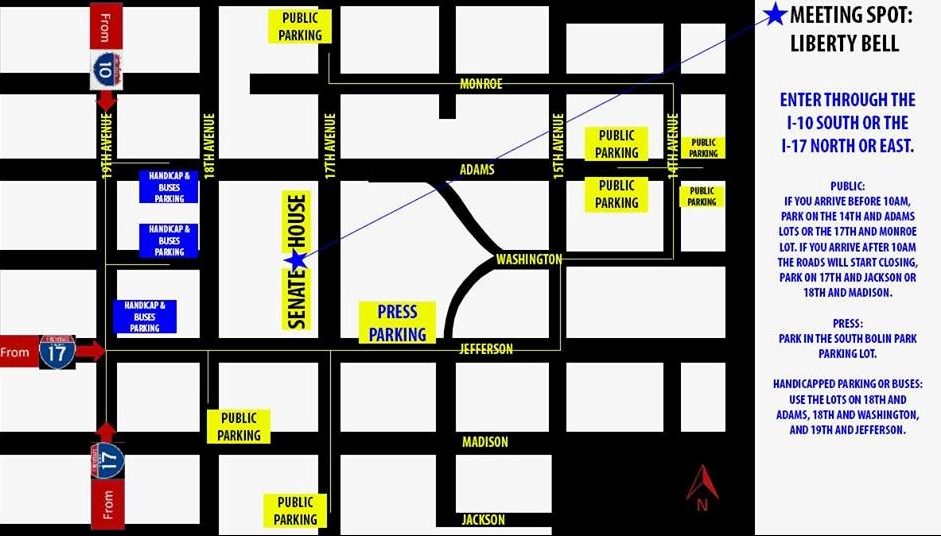 ABC15 has learned about two pre-march events Friday night.  A prayer rally will take place at Encanto United Church of Christ at 7 p.m.  Marchers can meet at First Church UCC near 3rd Street and McDowell Rd. Saturday at 9 a.m. to park, pray, and ride a bus to the march.

Black Lives Matter Arizona will make signs for marchers at 7 p.m. Friday at Delicias Park on 48th Drive and Orangewood Avenue.  The group will meet at Phoenix City Hall Saturday at 9 a.m. before walking over to the event at the State Capitol.

"Our asks are really quite simple," student organizer Jordan Harb said.  "We just want universal background checks and an emphasis on mental health."

"Give us a seat at the table, and we want to have dialogue," Martinez said. "We are  going to continue fighting until we see the results we've presented since day 1."