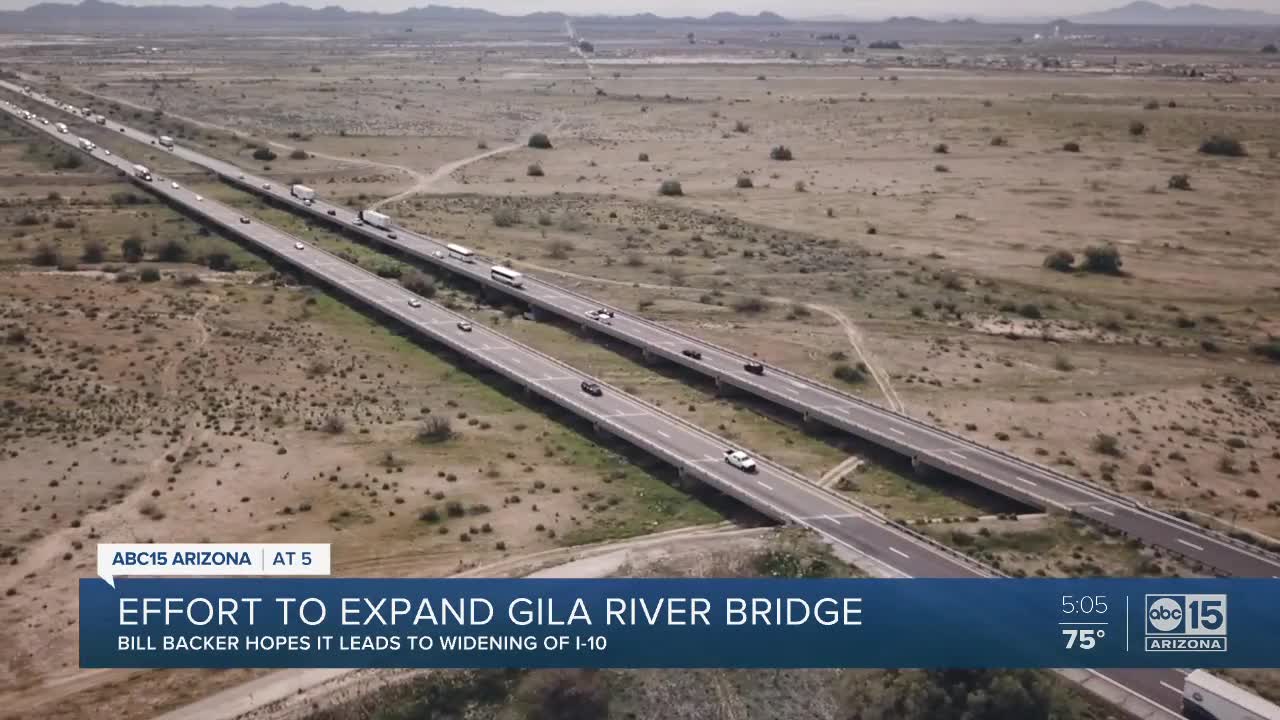 An Arizona State Representative has proposed a bill to help secure funding to widen the Gila River Bridge. He also hopes that it will eventually lead to expanding Interstate 10, south of Phoenix.

CASA GRANDE, AZ — A proposed bill that is making its way through the state legislature would help fund the expansion of the Gila River Bridge. The bill's sponsor, Rep. T.J. Shope (R-8) also hopes that the bill will lead to the widening of Interstate 10 in that area.

Rep. Shope's bill allocates $28 million from the state general fund to replace and expand the Gila River Bridge, which is located near Casa Grande. The bill passed in the State House, 58-0 (two people did not vote). It now moves on to the State Senate.

Currently, the Gila River Bridge has two lanes in each direction. Rep. Shope would like to see the interstate expanded to three lanes. Earlier this month. Red. Shope sent a letter to the U.S. Department of Transportation about grants to fund the widening of the freeway. Read that, here.

"I believe that it very well can make the roads safer," he said. "I think that it definitely will improve the traffic flow."

While the Gila River Bridge is a separate project, the stretch of Interstate 10 between the Loop 202 (SanTan) and State Route 387 is the focus of a study that is looking at potential freeway improvements, including the widening of the freeway.

Rep. Shope said the widening of the freeway would help interstate commerce, help alleviate backups during crashes and, perhaps, reduce the number of crashes.

"What you see on I-10 is folks who get frustrated because the rate of speed is probably -- in a busy time -- upwards of 10-15 miles slower than the posted speed limit and people begin to take chances to move ahead a little bit, to try and break that," he said. "Oftentimes, those chances end up with disastrous results. Hopefully, if we can go ahead and expand this to three lanes, like it is from Casa Grande to Tucson, we can see fewer of those types of incidents."

According to an ABC15 analysis of crash data, in both 2017 and 2018 there were more than 320 crashes along I-10 between mile markers 165 and 185, although the circumstances of each crash is unknown.

Two weeks ago, there were three deadly crashes along I-10 near Riggs Road. Impairment is suspected of being involved in two of those crashes. The third crash involved a wrong-way driver.

Some drivers we spoke to on Friday said they hope changes come soon.

"There's too many drivers that decide the left lane is just the cruising lane and they go slow so they impede traffic," said Connie Tkalcevic. "And then everyone's trying to get around them. It's just dangerous."

"You wouldn't have these cars speeding around you," said Don Poore, another driver.