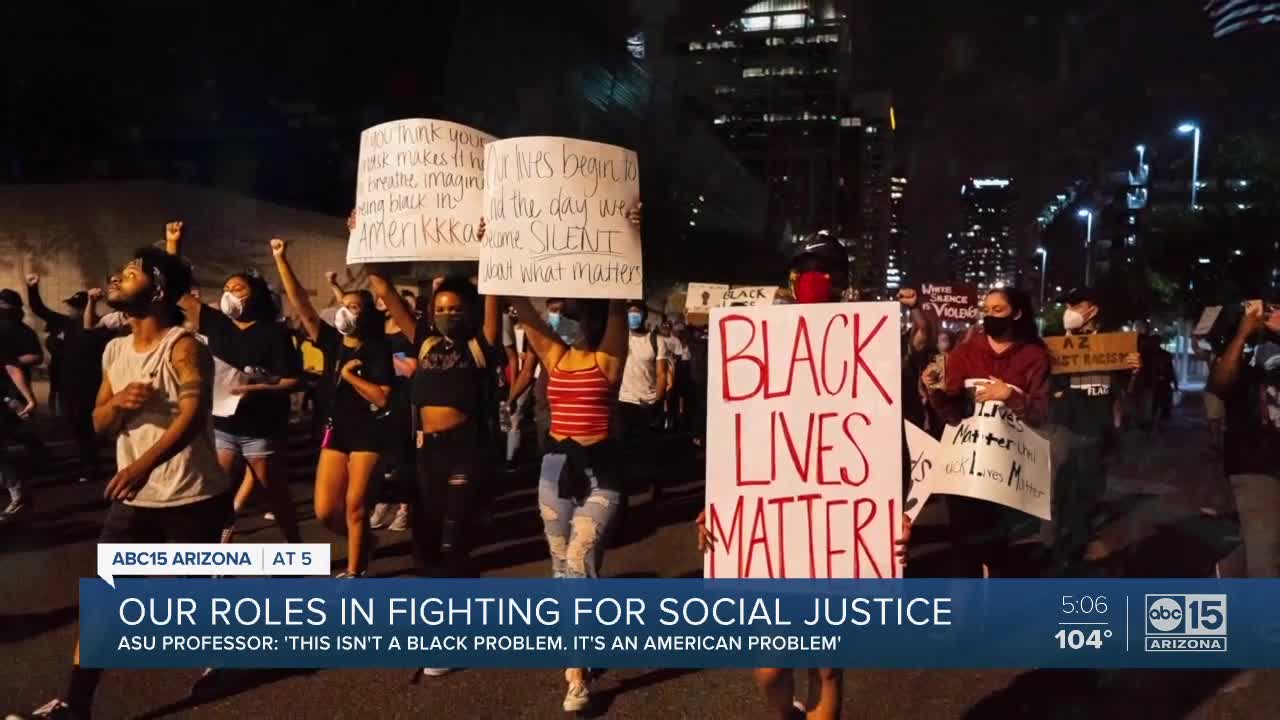 So, what's next and how can we prevent this from happening again? PHOENIX — Historians and social justice advocates say protests across the country are a response to the anger and frustration fueled by decades of injustice within the black community.

So, what's next and how can we prevent this from happening again?

Rashad Shabazz is an Arizona State University professor of justice and social inquiry at the School of Social Transformation. He said George Floyd's death brought back centuries-long trauma for black people.

"What is the everyday occurrence is the fact that we are overpoliced, that we are seen as criminal, that we are projected as the domestic boogie man. And as a result, the society --policing institutions and other public institutions respond to us as if we are not valuable and our lives don't mean anything. And that's the constant stress and anxiety that black people deal with," he said. "To know that you are a part of a people who are hunted and devalued and whose lives can be taken away at any moment for any reason without any accountability, that's a psychic pressure and form of trauma that black people in this country are constantly dealing with."

Protests in Phoenix and across the nation are about more than the killing of George Floyd. They're about the reality for black people in the United States--a society that doesn't provide equal opportunities or protections.

"Racism is not inevitable, it's not a fact of life and it can be changed," said Shabazz.

He said it's not up to black people to fix the system. It's up to those who have the upper hand, the majority, with the power to make a change.

"This is not a black problem, this is an American problem and white Americans have an absolute essential role to play," he said.

"We need help. We have helped ourselves for centuries. And we are in this moment that we need white Americans to stand up and be accountable. No longer being silent, recognizing that white Americans have privilege and challenging them is how we're going to deal with this problem," he said.

"Those in power, those who have positions of privilege, if they want to help, they have to look inside. They really have to look at themselves and understand their position and the next step is to ask how their position has contributed to this moment. By asking themselves, what does it mean to be white? How does my experience as a white person shape my understanding of what s going on? How does my experience shape how policing works? Having what we call a critical interrogation of the self."

Being silent is being complicit, and that's something Shabazz warned that kids will pick up.

"Your children are watching. They're watching. And what you do will plant a seed for what they do or don't do in the future," he said.

Shabazz said people can also get involved in anti-racism struggles, donate to the local Black Lives Matter chapter and educate themselves.

How to Be an Anti-Racist, Ibram X. Kindi

White Fragility: Why it’s so hard for white people to talk about racism, Robin DeAngelo

The Fire Next Time, James Baldwin

Between the World and Me, Ta-Nehisi Coats

When They See US, Ana DuVernay (Netflix)