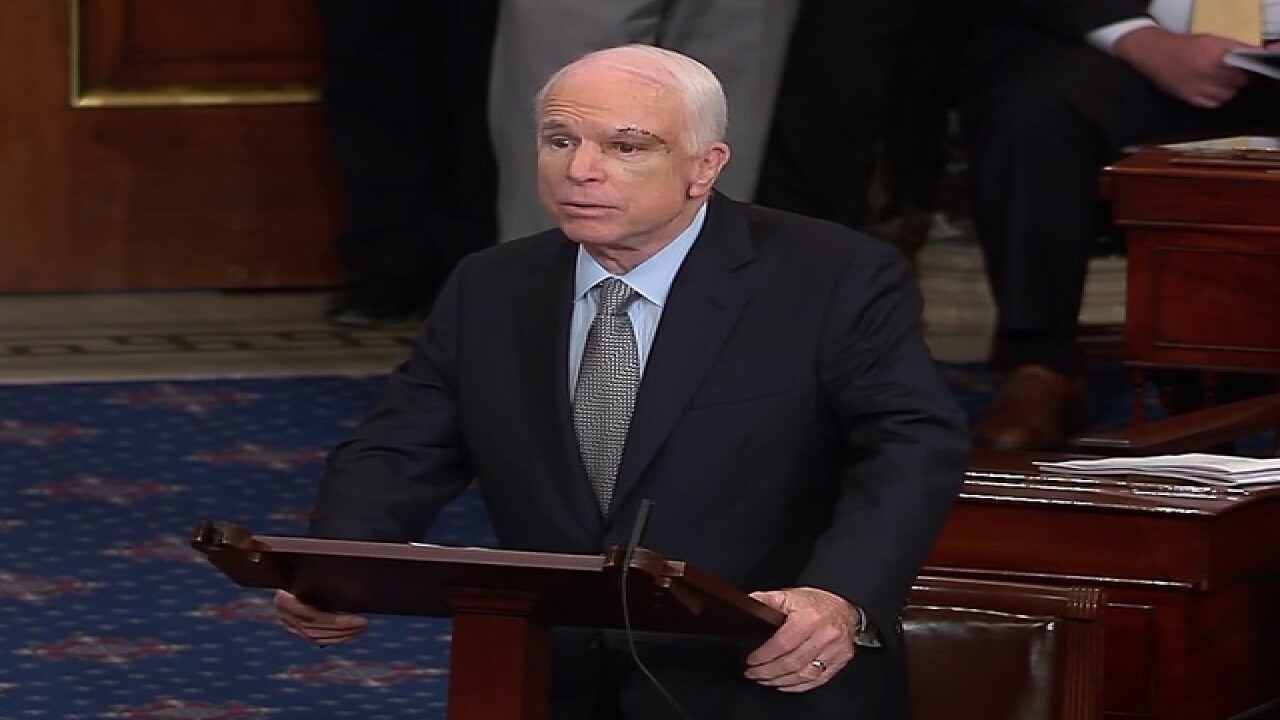 Applause and whoops greeted Sen. John McCain, who is battling brain cancer, as he returned to the Capitol on Tuesday to vote for moving ahead on legislation to dismantle Obamacare.

The 80-year-old McCain had a visible scar above his left eye after doctors removed a blood clot earlier this month. Days after the surgery, the senator disclosed that he had a brain tumor and had been diagnosed with an aggressive form of cancer.

"Stop listening to the bombastic loudmouths on the radio, TV and internet. To hell with them!" the feisty McCain said in a speech on the Senate floor.

He bemoaned the lack of legislative action in Congress.

Watch McCain's full speech in the player above.

McCain made the remarks after delivering for his party and President Donald Trump on the issue that's defined the GOP for the past seven years.

"He's tough as a boot," said Republican Sen. John Kennedy of Louisiana. "Many people understandably would be curled up in bed in the fetal position."

RELATED: Despite cancer diagnosis, McCain says, 'I'll be back soon'

McCain himself campaigned heavily on the "Obamacare" repeal issue last year as he won re-election to a sixth and almost certainly final Senate term. And there could be sweet revenge in defying cancer to undo the signature legislation of the man who beat him for the presidency in 2008, Barack Obama.

The Arizona senator would also deliver a key victory to President Donald Trump, despite emerging as one of the president's most outspoken GOP critics on Capitol Hill. During last year's campaign Trump shockingly ridiculed McCain over his years as a POW during the Vietnam War.

And the situation was eerily reminiscent of a similar scenario involving McCain's good friend, the late Democratic Sen. Ted Kennedy of Massachusetts, who returned to the Senate in July 2008 while battling brain cancer to vote on Medicare legislation, his dramatic entry in the chamber eliciting cheers and applause. Ted Kennedy died of cancer in August 2009 (the current Sen. Kennedy is no relation).

The possibility of McCain returning had been discussed around the Capitol on Monday, yet the announcement from his office late in the day came as a surprise. Nor did it guarantee success on Tuesday's vote for Majority Leader Mitch McConnell, who is managing a balky GOP caucus with almost no room for error in the closely divided Senate.

Yet fellow Republicans took McCain's return as a positive sign for Tuesday's vote.

McCain has not been overly enthusiastic about the GOP health bill or the partisan process through which it's emerged. After an earlier version was poised to fail, he called on McConnell to reopen the process with a bipartisan approach, advice the majority leader ignored.

But McCain's best friend in the Senate Lindsey Graham of South Carolina, and other colleagues who've spoken with McCain of late, say he's been itching to get back to the Senate, impatient to return to work.

"Is it surprising that he would get out of a hospital bed and go to work? No," Graham said Tuesday. "it's surprising he's been in the hospital this long."