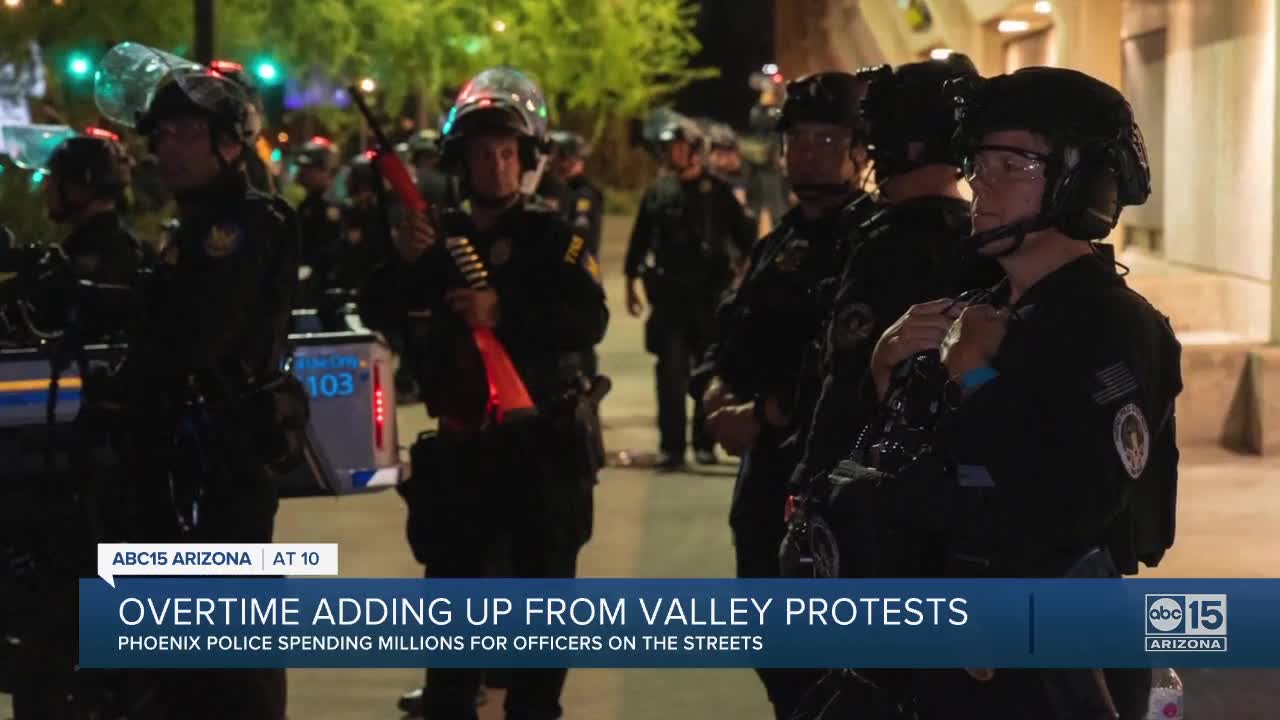 Phoenix police spending millions for officers on the streets. 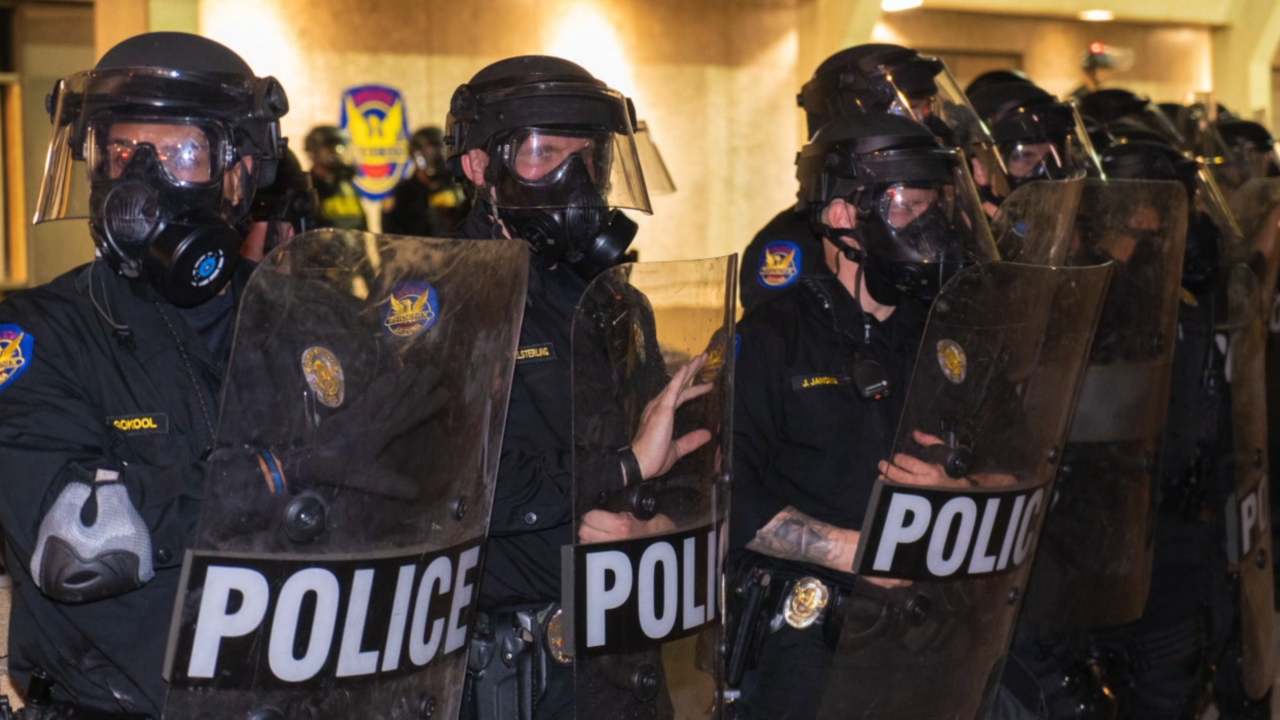 PHOENIX — Civil unrest and police reform have become key topics in the race for the White House.

Nationwide protests have sparked a national conversation. They have also led to loads of overtime for local law enforcement.

In 34 days this summer, the Phoenix Department spent more than $8 million in "demonstration overtime" costs alone.

In September, months after the protests flared and subsided to a smaller group, the department is still spending an unprecedented amount on "OT" - $296,314 in the first week of the month alone.

"The number is shocking," said Jamaar Williams, an attorney leader with Black Lives Matter Metro Phoenix. "It’s so shocking given the needs of our city and the legitimacy of their presence."

Since late May, Phoenix police officers have made $11,543,059 in overtime associated with protests and marches.

On May 28 and 29, there were large marches in the downtown streets. Phoenix police officers blocked traffic so thousands could exercise their first amendment right.

As the night wore on, though, many of the protesters went home and a more militant, younger, and agitated group remained - some of them arriving late with no clear affiliation. Water bottles were thrown at officers, fireworks aimed at cops in riot gear, as well as police cruisers and business windows smashed.

"There was a lot of criminal activity towards the end of the night," said Phoenix Police Sgt. Mercedes Fortune.

Phoenix police appeared to be somewhat caught off guard by the destruction and size of the crowds. On May 30, Chief Jeri Williams told the roughly 3,000 men and women in her department that they were being "fully mobilized."

"So everybody had to come in and be at work," said Sgt. Fortune.

Patrol officers, homicide detectives, even 911 operators all had to clock in, which equated to more than half a million dollars each day.

"We want to make sure we are protecting every single person - including our infrastructure," said Sgt. Fortune.

"It is this mis-prioritization of needs by the city," said Williams.

Williams believes the mobilization, and associated costs, are excessive and unnecessary.

"I’m tired of the argument that we have to waste millions of dollars on this hypothetical harm," said Williams.

"Are we actually addressing the things that people are protesting for? Or are we just spending $11 million to take care of some downtown property," asked Phoenix City Councilman Carlos Garcia.

Councilman Garcia has a lot of questions -- especially about the department being fully mobilized through June 12, despite most of those days having little or no protests.

"We’ve seen a lot of police officers just kind of parked around downtown over the past couple months, and it does seem like a ridiculous amount," noted Garcia, who has asked that the full overtime figures be prepared and sent to councilmembers.

On multiple occasions, more than one hundred squad cars filled the Burton Barr library parking lot. Many of them waiting there for hours. Multiple sources told ABC15 that many nights they, officers, would wait in the area "in case" protests escalated, but that rarely happened following the first two nights.

"We have to be ready," said Sgt. Fortune. "Intelligence tells us there’s people that are coming out and continuing to demonstrate, and that's absolutely their right."

Fortune is quick to point out that while protesters may not be in favor of the law enforcement presence, the officers always block traffic so the group can march in the middle of the street, or in some cases lay down in the center lane, in a clear effort to provoke an arrest.

"I think we need to start paying attention and make sure the level of officers that we have out there or actually matching the people that might or might not be protesting," said Garcia.

A big question now that the overtime has already been deposited in bank accounts - how is the department going to pay for all of it?

"It has not been brought up to us. We’re just kind of expected to pay the bill afterwards," said Garcia.

By the time it's all paid, there could be a new wave of protests. It is unclear if the approach or oversight will be any different.

"Our goal is always with good intentions to make sure our city is safe," said Sgt. Fortune.

"People need to question whether or not this thing that’s been presented to us as safety, is actually the safety that we want - or is that actually creating safety in the first place?" said Williams.

"I want to know what the strategy is and what it is we are actually afraid of," said Garcia.

Mayor Kate Gallego declined to be interviewed or comment for this story, but a spokesperson said she "meets frequently" with Chief Williams.

"...Had Phoenix PD not taken strong steps to quell the destruction we saw here in the first few nights of protesting, and maintained control of our streets through significant continued presence we would have seen the exact same destruction here we've seen elsewhere. Compared to those potential costs, $11 million is a bargain..."

That overtime money does not include other costs associated with these protests - like the helicopter flying for hours overhead, the pepper balls and chemical agents deployed, the water and meals provided for officers working non-stop an entire shift, or even the costs for other agencies that assisted, like the Department of Public Safety.