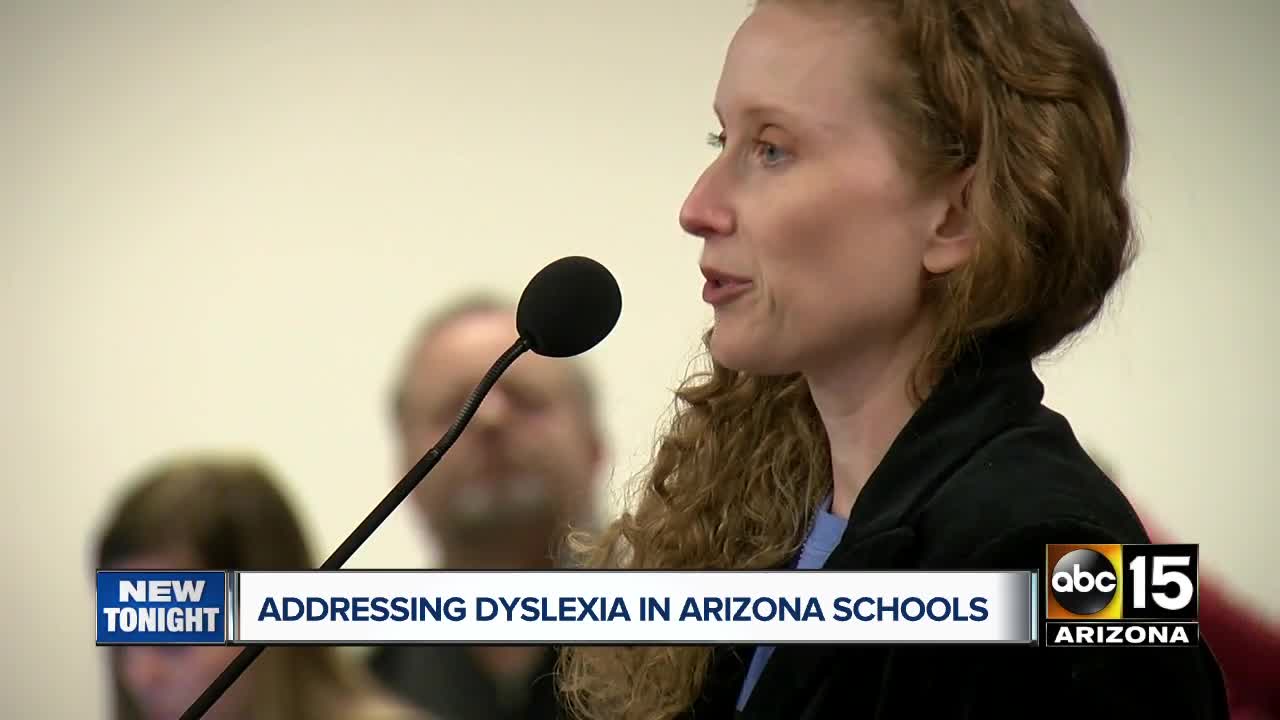 One out of every five students in Arizona has dyslexia, according to numbers released by members of the International Dyslexia Association during a powerful and emotional hearing that took place at the Arizona State Legislature to discuss Senate Bill 1318. 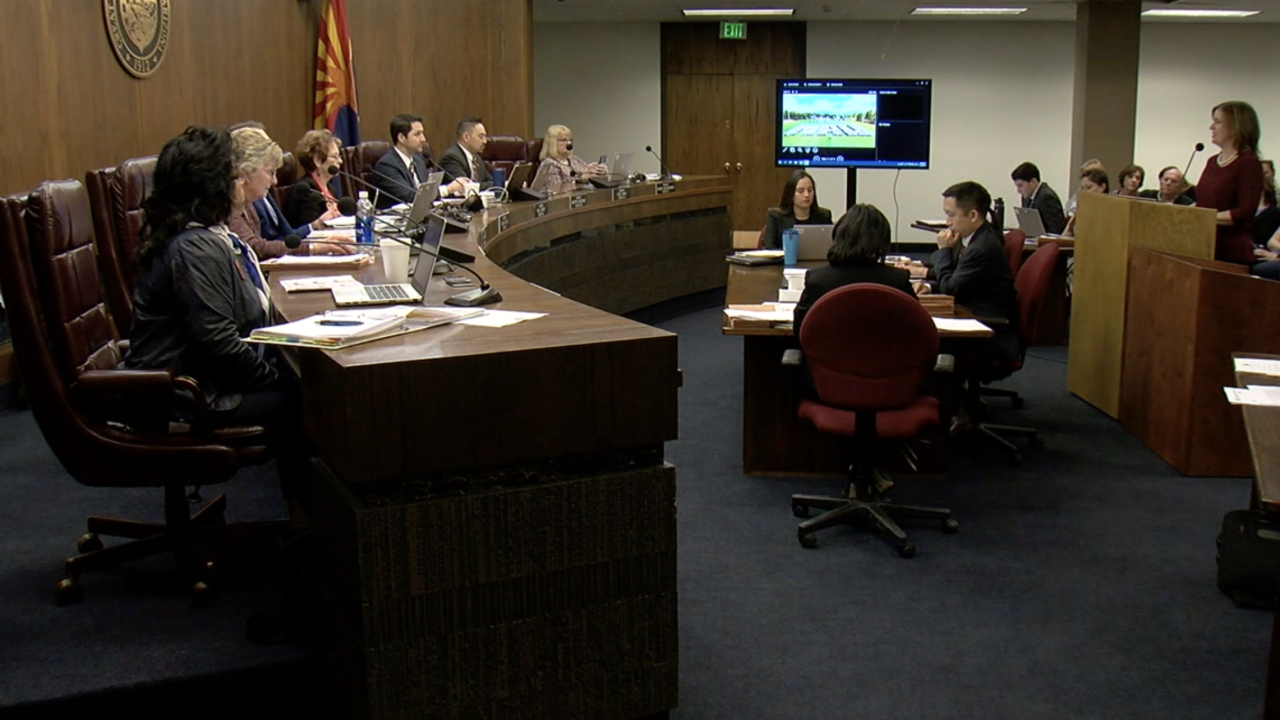 PHOENIX — One out of every five students in Arizona has dyslexia, according to numbers released by members of the International Dyslexia Association during a powerful and emotional hearing that took place at the Arizona State Legislature to discuss Senate Bill 1318.

State Senator Paul Boyer, who is sponsoring the legislation, said most teachers in Arizona schools did not know how to handle children with dyslexia. Dozens of parents, teachers, and students testified in front of lawmakers saying that 42 other states already have dyslexia screening in place at schools, questioning why Arizona has none.

Advocates of the bill said the cost to society would be huge if Arizona did not take steps to address this problem now. Those who did not get early intervention with dyslexia could have major problems with learning down the road. Some studies even showed that almost half of the prison population was dyslexic.

It's not a chance parents supporting SB 1318 want to take.

Tiffany and David Greene had four children, three of whom have dyslexia. Greene joked that she had hit the dyslexia jackpot when she addressed lawmakers during a hearing for the bill.

"As a mother, it's just heart-wrenching, and it's confusing, you don't know where to go," said Greene, after school officials in her district told her they did not have the ability to help her children. "We've been through a lot with our kids."

The Greene family spend up to $2,000 a month to hire private tutors to help their children, but many families do not.

Many young school-aged children also addressed lawmakers during the hearing, bringing everyone in the room, including seasoned lawmakers to tears.

"School was very hard for me, and I felt like a failure, and I know there are other kids sitting in school today that feel that way," said one child.

Another young boy testified saying, "I would have panic attacks before I read aloud in class. Studying was absolutely exhausting. It was the worst; I'd get into screaming fights with my parents who thought I wasn't studying for vocabulary tests because I was failing."

Several children spoke up saying their teachers would get frustrated with them in class, and make them sit on the sidelines and do other work while they taught the rest of the class.

"I get frequent panic attacks because of this, and it kind of kills me a little bit to know that there are other kids that have to deal with this," said one young boy.

Tiffany Greene's daughter, Lola Greene, also spoke up. She did not have dyslexia but said it was really hard for her to see her brothers struggling with it.

Many of the children who testified are dyslexic. Some of them stumbled through their words, struggled with reading what had been pre-written, but all of them gave it their best shot and received loud applause and praise from lawmakers who were part of the Senate Education Committee.

"The dyslexic child is not slow or dumb. They just learn differently," said another.

In fact, according to the International Dyslexia Association, many successful celebrities and academics were known to have dyslexia. The list included names like Albert Einstein, Agatha Christie, Alexander Graham Bell, Jay Leno, Magic Johnson, Whoopi Goldberg, and Orlando Bloom.

Experts described dyslexia as a specific learning disability that manifests primarily as a difficulty with written language, particularly with reading and spelling. Although dyslexia is the result of a neurological difference, it is not an intellectual disability. Dyslexia occurs at all levels of intelligence, average, above average, and highly gifted.

Jamie Wong, who went through a special seminar so she could tutor her dyslexic child, said they just processed words differently. She too was inspired to learn, after being told her daughter's school could do nothing to help their family.

"As a mom when you're told we don't know how to help your child it's just terrifying, it's absolutely the most terrifying experience of my life because I felt so helpless," said Wong.

Experts say if caught early, dyslexia can be corrected quickly, with special tutoring. It becomes much harder as a child gets older.

Arizona State Senator Sonny Borrelli also made a special appearance during the Education Committee hearing to show support for the bill, saying he too had struggled with the learning disability as a child, but thanks to a lot of support around him, he had been able to overcome those challenges.

SB 1318 would require the state to set up dyslexia screening for children in kindergarten or first grade. Supporters of the bill stressed this would not be a diagnosis, just a screening for warning signs. The bill would also require the state to hire a statewide dyslexia training coordinator, and set up training guidelines for teachers to understand how to handle children with dyslexia. The training would not be mandatory.

Senator Boyer said he was looking into costs associated with the bill, while he did not have an exact number for us, he stressed that it was something he was willing to fight for, to ensure the future prosperity of children in Arizona. Advocates said the economic costs to society would be a lot greater down the road if dyslexia went unchecked and untreated in children.

In an evening update, Senator Boyer said the bill passed unanimously in the Senate and is now headed to the House.

Senator Boyer said the following amendment was made to the bill:

Click here to read the full text of the bill and stay on top of future hearings and votes.